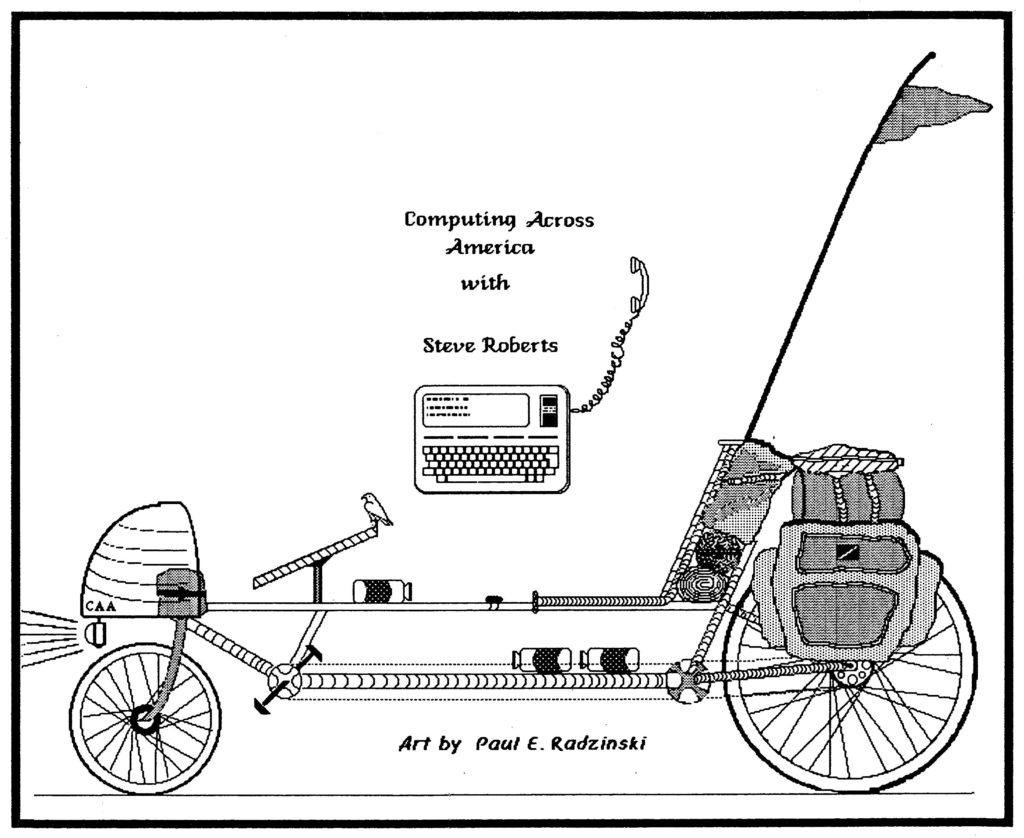 This is a tiny excerpt from the Computing Across America book, describing the moment I first met a Mac. I had seen the Dolphin and Dorado at Xerox PARC during an Artificial Intelligence conference in 1981… as well as the Star derivative for the business market on display at NCC ’81… but this was the first time a bitmapped desktop machine had been affordably offered in the personal computer marketplace (not counting the $10K Apple Lisa released a year earlier).

It was in the Lake Charles home of Paul Radzinski that I was destined to develop a serious love affair — with an Apple Macintosh. Paul had been the first person to issue an online invitation via CompuServe, and after we took care of the requisite pizza he grinned and said, “Hey, I just bought a Mac — want to give it a try?”

Now, I’ve always been rather blasé about new computers — I’ve lived around this industry for a long time and I’m seldom excited by systems that are just faster or flashier than the previous year’s models. They keep getting better all the time, of course, but their evolution has until recently been along the lines of performance, not philosophy.

The objective of artificial intelligence research is the creation of machines who think. A lot of people find this scary, but the prospect is intriguing — smart computers would be a lot less threatening than the ones we have now. Wouldn’t a modicum of adaptability, a touch of wry humor, and a soupçon of grace have a sweeping effect on their popularity?

Imagine having an electronic pal who gathers mail and information from worldwide networks for delivery with your 7:15 coffee. You briefly discuss a few personal problems, then settle in to read for a while. The computer ambles over with a furry little wiggle, curls around your feet, and contemplates the ontology of n-order spacetime — just to keep you company.

Well, the Mac won’t quite do that, but it’s certainly an improvement over traditional personal computers. It’s more like a video game, in a way — you can undergo a graceful evolution from naiveté to expertise without having to spend hours digging around in obscure manuals. Instead of typing commands or wading through menus, you mess around with things as if they’re objects on a desktop.

I sat in Paul’s office, tinkering with the little gem, realizing that this is only the first of a whole new breed of computers that is emerging from the research labs. I had only been on the road for eight months, but my old feeling of intimacy with the industry was fading fast: like an ex-lover, the technology was drifting out of touch. I saw her there in southwest Louisiana wearing sexy new clothes, and I suddenly felt jealous, wistful, almost hurt.

We had been close once, you know — back in the 1970’s when things were simple and address spaces stopped at 64K. But she had matured since the good old days; she had lost her baby fat and become worldly, sophisticated. She was powerfully alluring, but no longer my sweetheart. There was an ache in my chest and a sense that she had moved into the fast lane even as I was lazily drifting along the shoulder on my bicycle.

“Damn, you’re beautiful,” I whispered, tinkering with her fonts and pulling down her special features menu. She danced at my touch, smooth and responsive, her cursor moving precisely as I manipulated her mouse. Teasing me, mercilessly teasing me.

“What are you doing in Paul’s bedroom?” I thought with a small red flash of rage. I was agitated, breathing rapidly — as if I had been invited for dinner at a friend’s house only to discover that his blushing young bride is someone I have been in love with for years.

I suppose I should accept this as one of the costs of the journey: I can’t have it all. I have eloped with the Other Woman.

“I think I’m in love,” I told Paul, hiding my deeper feelings and remembering the last time I had said that — zipping along an Ohio country road on Robby’s Avatar. “I wonder if I can fit one of these on the bike? The Model 100 is starting to seem inadequate.”

“I don’t know, Steve. Will a mouse work in the field?”