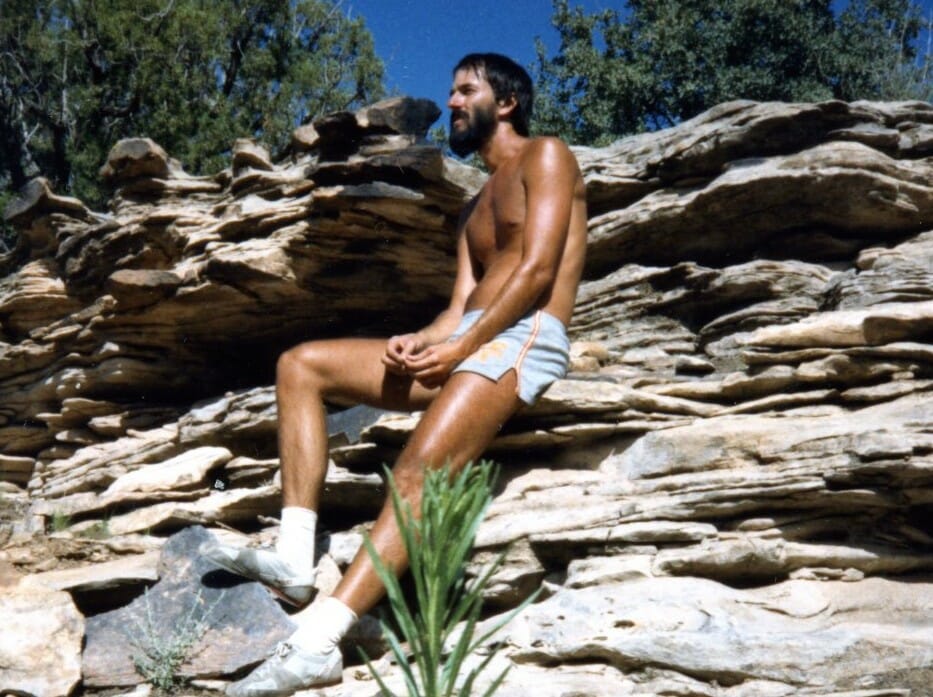 Excerpt from Computing Across America, here is a little snippet about a day near Santa Rosa Lake, New Mexico (6182.4 miles along). The photo is a timed self-portrait, taken just before the events in the story.

Santa Rosa, New Mexico. It could have been the set of a wild west movie. I pitched camp near a dry creekbed, surrounded by cactus, sun-bleached driftwood, and white rock layered hard and flaky like a giant stale baklava. In mid-July sun my skin had become brown and sweat-glistened—on impulse I made certain of my solitude and then disrobed to creep nude through the wilderness, sneaking up on rabbits, touching cacti in wonder, and pondering the unity of things.

Yeah, something in my vision changed abruptly in the wilds of eastern New Mexico. I sensed, walking naked in that endless land, an order—a balance. The fancy bike and computer were incidental; they had gotten me there, but they were not the journey. That’s an easy thing to forget in the glow of public attention, the constant questions about steering linkages and solar panels. I walked softly and felt the rock hot beneath my feet, the sun burning into me, the eyes of a rabbit looking back in recognition… and I realized I was part of it all—a native, a human animal.

I stretched out on a rock, kissed lightly by the breeze. Gravity was part of it too, this force I was spending more and more of my time fighting. I relaxed and let it pull on me; feeling it in my tongue, my gut, my muscles. Silence. A bird. Somewhere the delicate gurgling of water beneath rock. My breath. All part of the same system, the same planet. My cousin the rabbit watched, nibbling automatically, sensing no threat.

We high-tech humans have a critical job before us—a rethinking of our place in the order of things. We have come to see ourselves as different from all the rest; we think of ourselves as the players, producers, stagehands, audience, and even reviewers in some kind of huge passive theater. That “all the world’s a stage” metaphor can be taken too literally: we’re all in this together—you, me, the rabbit, the rattler, the cactus, the black guy in the Buick, the storm in Muleshoe, the corynebacterium tenuis in your armpit, and the two locals who tried to sell me dope in that Santa Rosa campground. (Yeah, and the Russkies too.) One planet, one system, one whole. That’s easy to forget when the universe appears to be a thing of human creation, a multichannel abstraction delivered via cable to a glowing box in the living room.

Try walking naked in the wilderness sometime. Do it alone and without thoughts of sex. You get a lot of interesting answers without having to ask any questions.