This page is for a few notes about the SharkRF OpenSPOT, which I use aboard Datawake for D-STAR, DMR, and Fusion (amateur radio digital voice technology). These three modes are a powerful disruptive force in ham radio, and a lot is going on.

Here on the boat, I have the OpenSPOT plugged into my LAN… and have started participating in weekly nets and chatting comfortably with friends worldwide:

I’m loving this so far, and it feels like the good old days of amateur radio repeaters but with global scope and sometimes-daunting complexity. The OpenSPOT sits on my LAN, and that little antenna talks via D-STAR to either my Icom ID-5100 in the console or the Kenwood TH-D74A handheld in my pack… or via DMR to the Connect Systems CS580 (which can interoperate with Fusion). 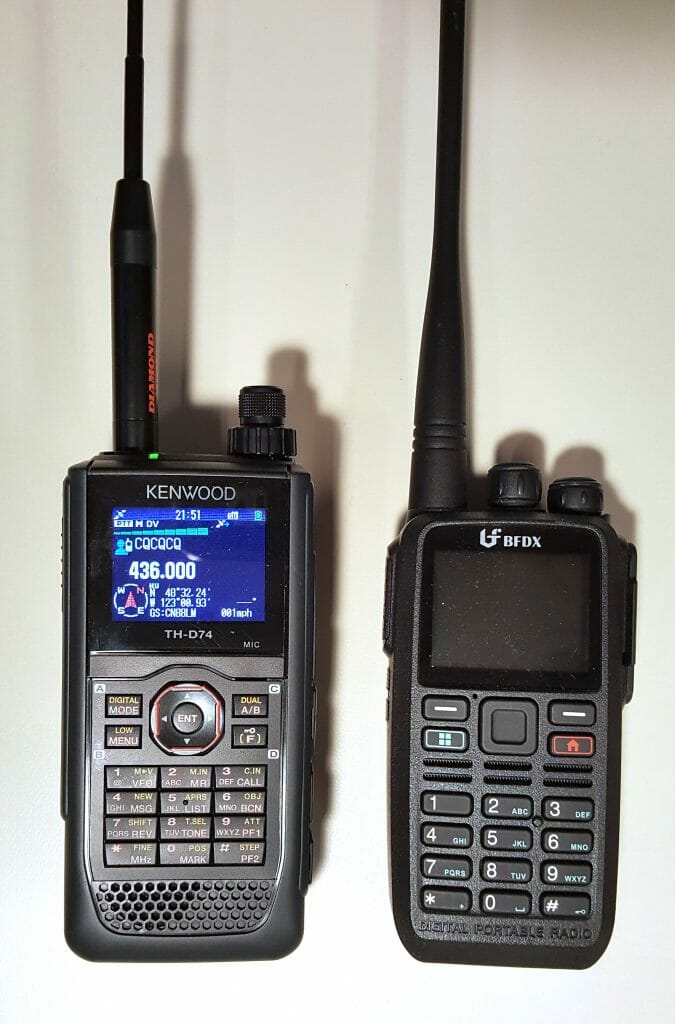 That jumble of terminology is shorthand for something rather magical that has recently exploded on the ham radio scene. Digital voice modes have historically required net-connected repeaters, much less common than the classic FM machines that define the 2m/70cm landscape. The three digital flavors have been gradually gaining ground, though still rare in the boonies, but there has been a game-changer in the form of little hotspot products residing on the ham’s local net connection. These come in many flavors, including some (like the excellent DV Mega) that depend on a Raspberry Pi or dongles that live on a full-size PC… but the easiest stand-alone solution, in my opinion, is the OpenSPOT. (Hey, a blinky box with Ethernet on one end and an antenna at the other — what’s not to like? And it was just a few minutes from unboxing to being on the air.)

There’s a huge amount of information around the Net, some a bit dated or confusing… the learning curve is deep, and I won’t even begin to try to cover it here (besides, I’m still a relative newbie and it is changing fast). But the rewards are huge, particularly for fellow technomads or voyagers who have a cellular data connection. This works mobile just fine, opening up the whole world of reflectors, repeaters, and talkgroups… I’ve heard long-haul truckers on D-STAR, and there is even a reflector (XRF555A, with an active Facebook group here) that has proclaimed itself as the home of “truckers, travelers, mobiles & portables – world wide.” It is turning into a hangout for RVers and other hams on the road… today I heard two 18-wheelers chatting from Pennsylvania to Arizona, including Justin KD0QZR who founded the reflector:

There are folks who say (with some justification) that this is not real ham radio. It will break if the Internet goes away, which kind of defeats the purpose if one’s motive is all about SHTF situations, and in a twisted way it is also “too easy” even though it is anything but… chatting with a guy in New Zealand doesn’t give me nearly the thrill I would have from the same contact on 20 meters, as he sounds like he’s in the next room and the Internet has made long-distance an obsolete notion. I would never advise someone to have this as their only ham radio tool… I think of it as a hybrid of Internet-enabled conferencing and the new breed of digital radios (some of which, over in the DMR domain, are only about $100). Imagine thousands of ham repeaters with world-wide coverage and no propagation issues, along with a relatively high percentage of tech-savvy users… and you can see the potential, even if there are complex tools to grasp and battles between competing proprietary technologies (anathema to hams). So even if it annoys traditionalists, it has come into its own as a powerful new medium that uses ham radio as a component. 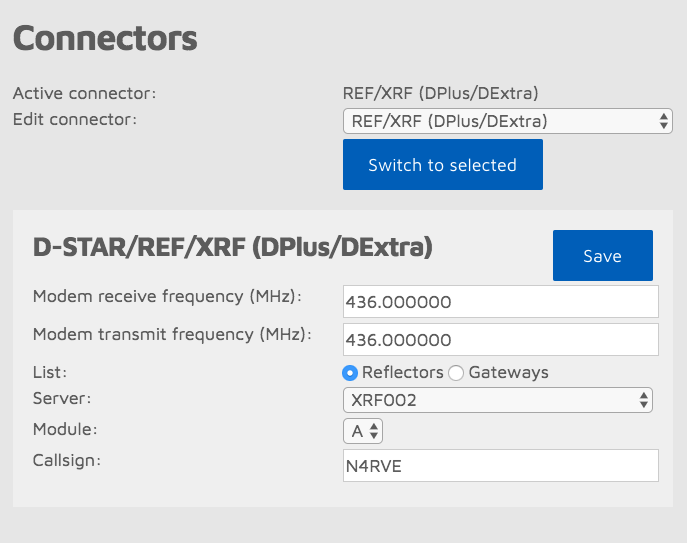 I’m seeing diverse community development, with weekly nets (like the excellent Thursday-evening D-Star Roundtable on XRF002/A, which you can monitor on Broadcastify), regional repeaters, interest-specific hangouts… along with a fair amount of us-vs-them cultural polarization defined by modes, vendors, hotspot types, or reflector sub-groups that fracture the community into factions. Lively stuff, and it is adding a whole new twist to amateur radio! Things are changing fast.

But enough philosophizing. This page is mostly here to be a repository of my own system specifics, starting with data rate observations…

Being on a boat, I was curious about the amount of network traffic generated by the OpenSPOT, so looked at a Zabbix report (this runs on a dedicated NUC in my ship network, getting SNMP data from all connected devices). The OpenSPOT is plugged into port 24 of the UniFi switch, and here is what it looks like when I connect to a reflector and monitor traffic for a while. The blue “outgoing” is TO the unit from the network, and averages about 55 Kbps when voice is happening. In this case, I wasn’t speaking, and the “incoming” peak at the beginning of the monitoring window was just the initial setup when I switched to the reflector. Baseline with radio and web interface off and “null” reflector connected is 10Kbps to the unit and about 1 in the other direction, and opening the web interface (with radio off) takes that to about 19 and 8. Interestingly, connecting to an inactive reflector lowers those numbers to roughly 10 and 2. Click the image for a more-readable full size.

As I work more with this tool and the digital modes, I’ll add additional sections to this page… 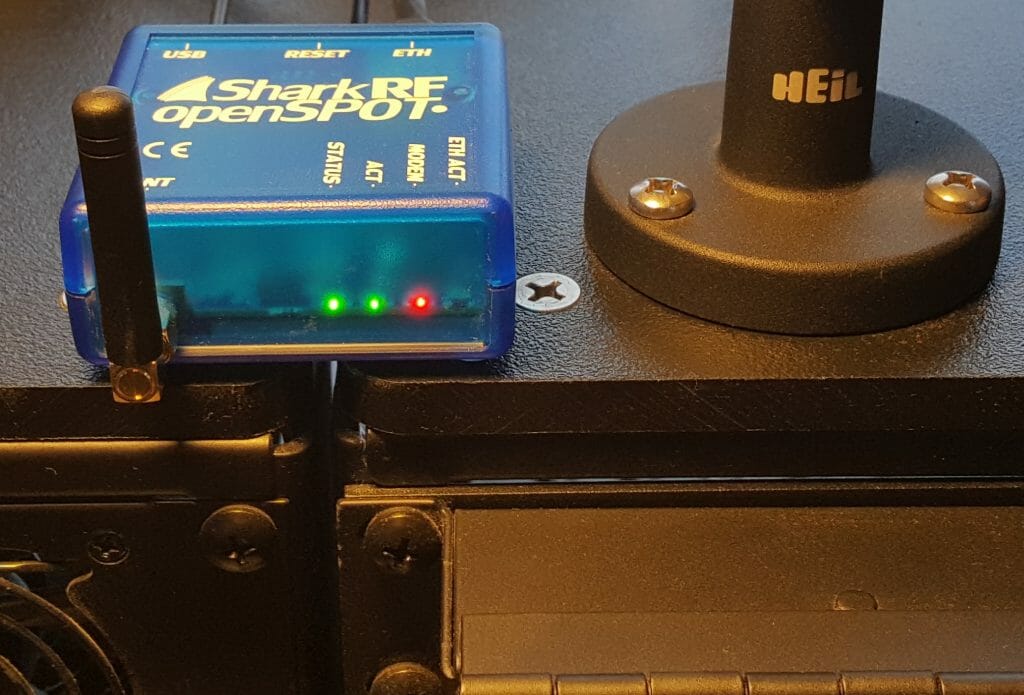