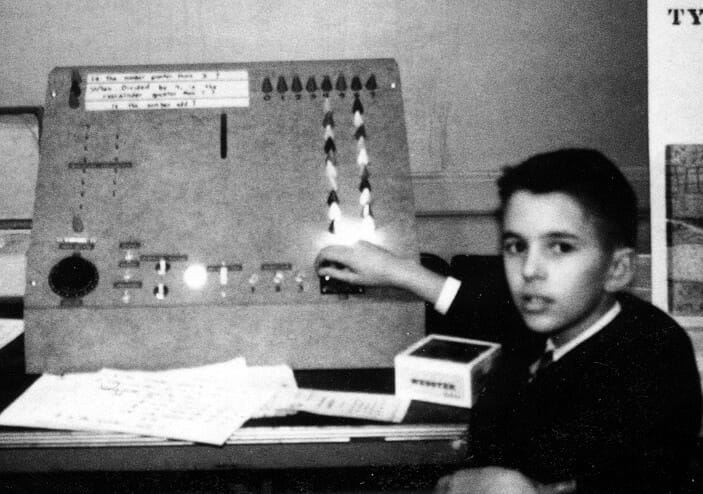 I have often joked over the years that I never outgrew science fairs… showing off the various technomadic machines at trade shows and other events was eerily reminiscent of those early years, complete with passion, demo effects, marketing, and procrastination followed by despair. I credit science fairs with giving me a lifelong project-oriented perspective, and in the intellectual wasteland of school they were the only thing that kept me sane. This one was my second project (after “The Master Magnet” in fifth grade), and of course we can see that “computer” is a bit of a misnomer for a simple binary decision tree of relay logic (augmented by cascading relaxation-oscillator blinkies with the venerable NE-2, and a few other bits of eye candy). But I was honing my packaging skills… good times.

(I have three of those science-fair winner blazer patches for sale.)

AN ELECTRONIC computer which he designed and built and his demonstration of the device has won two recent honors for Steve Roberts, 11-year-old son of Mr. and Mrs. Edward H. Roberts, 9908 Old Six Mile Lane, Jeffersontown. Steve, a seventh grader at Louisville Country Day School, took top honors in last Wednesday’s Science Fair at the school for seventh graders, and fourth place honors in general science category of the Louisville Area High School Science Show Saturday at the Kentucky Fair and Exposition Center. He is a member of the Jeffersontown Junior Optimist Electronics Club.