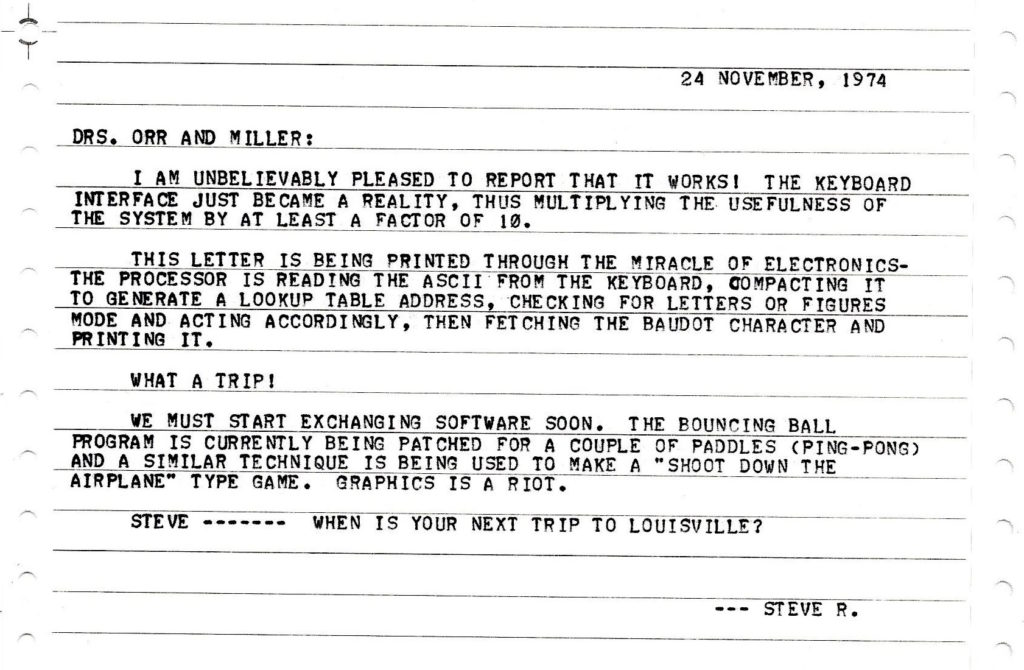 This is a minor bit of history – about a month after my 8008 first came online, I added a rudimentary hand-assembled editor to CYMON (Cybertronics Monitor) and used it to send a letter to my friend Steve Orr in Cincinnati (who scanned this document in 2018). The teletype hardware interface was described in my Electronics article published a few months earlier, augmented here by ASCII-to-Baudot lookup, and it is nice to see this small relic of early system use as I was building essential tools for paper-tape storage, printing catalog wrappers, software tools, DAC graphics, music synthesis, and everything else that fascinated me… this homebrew machine blinking in my apartment living room was the center of my 22-year-old reality in those early years:

This triggers creaky old-timey paleogeek musings… like I imagine how my father felt when looking at Edison cylinders or the kerosene sidelight from his beloved Hupmobile. There weren’t many of us tinkering with computer contraptions back in 1974, and we stuck together via mail, newsletters, and small local clubs. The note references graphics that I was doing on my Tek scope with a couple of multiplying DACs on 8008 output ports, using a DMA display list that I populated with machine code… but the thrill of the moment was getting the keyboard piped to the TTY so I could do text processing and actually edit something before printing. Crazy to recall how that was once pretty amazing.

My furry 22-year-old head would have exploded if a time-traveler had offered a glimpse of the “phone” that I now carry everywhere.

I am unbelievably pleased to report that it works! The keyboard interface just became a reality, thus multiplying the usefulness of the system by at least a factor of 10.

This letter is being printed through the miracle of electronics – the processor is reading the ASCII from the keyboard, compacting it to generate a lookup table address, checking for letters or figures mode and acting accordingly, then fetching the Baudot character and printing it.

We must start exchanging software soon. The bouncing ball program is currently being patched for a couple of paddles (ping-pong) and a similar technique is being used to make a “shoot down the airplane” type game. Graphics is a riot.

Steve —- when is your next trip to Louisville?