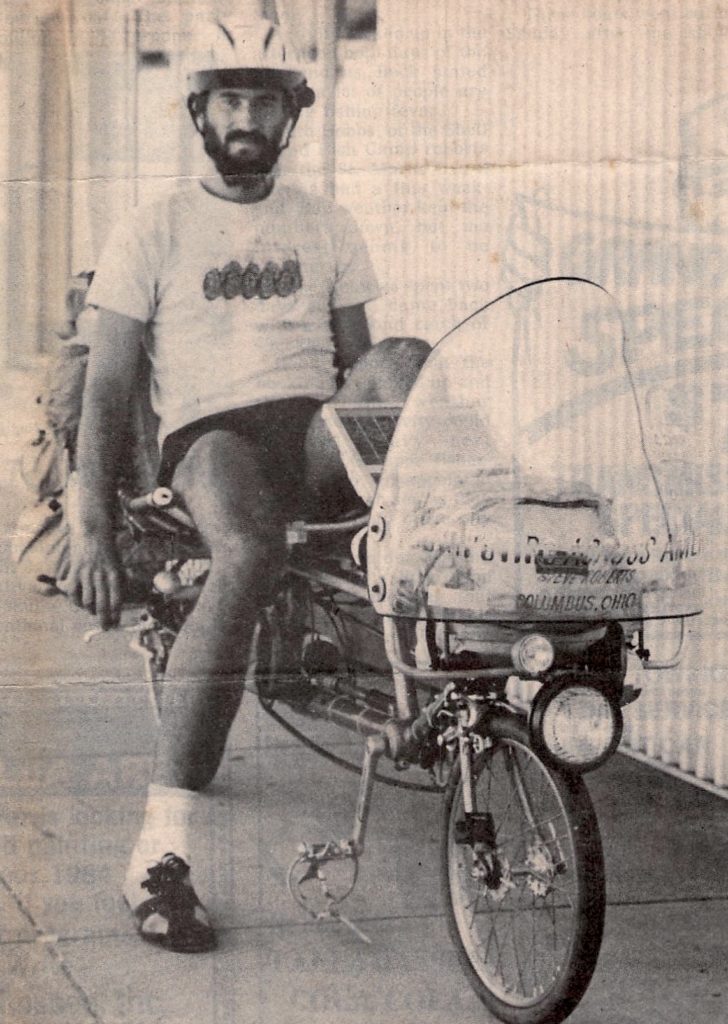 There are many people in the world today that seem to be tired of the grind of a nine to five job. The number of people who actually do something about their complaint are small.

One individual who has done something about his situation, came pedaling through Crawfordville this past week. For 31-year-old Steve Roberts enough was enough and he now is in the midst of a bicycle journey that will take him all over the country.

The former Columbus, Ohio native spent a quiet moment at Crawfordville’s Little Family Inn on his way to Panama City and Texas.

Roberts is not your average bike rider. He helped design a 160 pound, 18 speed, eight foot long bicycle. Franklin Frames in Columbus helped him design the two-wheeled mode of transportation, which has all the modern conveniences for the free lance writer on the move.

He writes articles as he travels and then passes them along to his publisher in Ohio by way of a small computer. The articles are sent over telephone wires just the way many newspaper reporters respond to metropolitan dailies.

Roberts left Ohio in September because “I was tired of the three bedroom ranch in suburbia. I wanted to travel and so I sold my home.”

The bike is strictly powered by the long legs of the bearded rider. His stop at the restaurant was as he put it, a refueling stop. “I’m going in to refuel right now” Roberts stated as he walked up the steps of the Little Family Inn.

What better way for a writer to get material for a book than to tour the country. His $5,000 bike is equipped with a solar word processor to help him pass along those stories he wants to have printed.

To get the inspiration to be a long distance biker, one would assume that Roberts had some biking experience. “I wasn’t an experienced biker at first” he said. After 3,800 miles on the road it is safe to assume he has become an experienced rider.

His riding schedule is quite challenging when you consider he rides about 70-80 miles a day. Roberts stated that riding his eight foot bike on flat roads poses no problems. It is quite a different story on large hills. He added that he has used all of his 18 gears on some of the tougher hills.

Roberts has spent several months in the sunshine state. He has stopped in such cities as Key West, St. Augustine, Gainesville and Tallahassee, along with the trip through Crawfordville.

Traveling around the country, Roberts has a flock of interesting stories. One particular story that he is fond of telling occurred in Maryland. His story went something like this: “I was traveling along some wooded areas near the Potomac. In the distance I spotted a truck wreck and decided to take a closer look.

“All of a sudden five tough, mean guys stepped out of the woods,” he said. As he stood in front of his contraption, the men questioned him as to what he was doing. Roberts explained about his trip and waited for a favorable response.

The men then explained that they were from the Hagerstown prison out on a clean up detail. They proceeded to take Roberts into the woods where they showed him “a mound of danish and Sara Lee Cakes.”

Before Roberts knew what was happening the men were arguing about which danish was the best. Roberts described the scene of convicts standing around his bike stuffing danishes in every nook and cranny of his bicycle. The convicts, it seemed, had themselves a large haul of stolen goods.

Roberts plans were to take him to Franklin County and then to Panama City. His next planned stopover was set for Austin, Texas.

It will be hard to decide where Roberts will complete his journey. He is set to travel the west coast up to Washington, but from here his plans are not quite as clear. One thing that is for sure is that his trip won’t land him in Columbus, Ohio.

“I promised myself that I would never live through another Columbus winter,” Roberts stated. So that is why he spent so much time in the state of Florida.