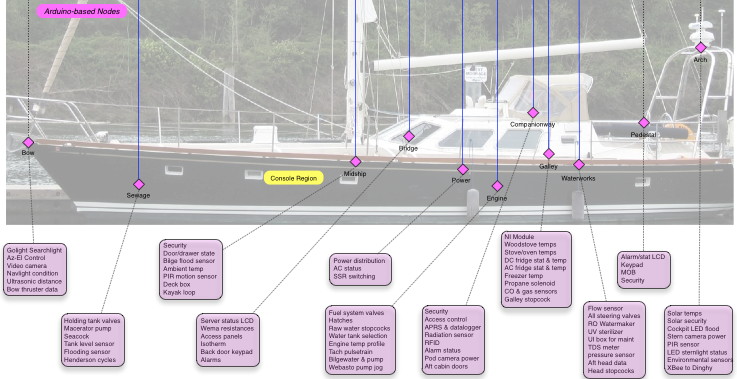 ‘Tis a busy time, this January in the Nomadhouse: a wonderful visit from my daughter, Zen Cart learning curve, Satie’s Gnossiennes, stoking the home fires, magnetized boat curtains, lab entropy reduction, and plunging into ship network design… and that’s just the fun stuff, interrupted too often by the psychic energy sinks of daily life and a sore back. But the show goes on, with a diffuse sense of progress reflecting the classic “gain-bandwidth tradeoff” so tidily that I have a tangible sense of enhanced Q when I manage to focus on one thing for more than a few hours.

The area under a broad low curve is the same as that under a tall narrow one, reflecting a total expenditure of human energy on either lots of things at once (with minimal progress on each), or one thing at a time (with corresponding lurches forward whilst ignoring the rest). The former would seem to be worse, given context-switching overhead, but the latter carries its own hazards… like losing momentum on any project not currently in the spotlight. Being finite sucks.

Well, enough moaning about the twisted geek metaphors of sloth-avoidance. Things are going well… with shipnet development on center stage.

I mentioned last time that the first node under development is Sewage, and it is now well along. My initial test setup in the form of stiff dipswitches in the proto-board was not at all pleasant, so I tossed that and built a proper simulator, reflecting actual hardware. This is the first of many such “busy boxes” cobbled together from old junk around the lab, and they will allow software development in a realistic hardware environment that can then be ported directly to the ship.

It’s not the prettiest thing, but has all the I/O needed (plus a vehicle back-up alarm mounted behind the 6×10-inch panel). The three “valves” correspond to the holding-tank thru-hull stopcock, tank vent, and overboard sink drain… and the toggle switches simulate the pump circuit breaker, macerator switch, and a sensor on the diaphragm pump for the Lavac head. The 3-position dipswitch will let me test the tank-sensor interface code, and the gadget on the right is a float switch that will detect water in the bilge. And there are three LEDs: the “OK” blinkie, a warning to avert firing up the macerator if the thru-hull is blocked, and another to remotely show a tank-full condition in the head compartment.

All these just have #22 solid wire leads, and thus play nice with the Arduino node and its prototyping shield mounted on the baseplate behind the panel. I considered using toggle switches for the valves as well, but preferred to have a visual indication that reflects the reality of the boat (and also get familiar with any contact-bounce or other artifacts in the magnetic reed switches used to detect their position). I milled a little flat on the tail of each handle, then used Gorilla Glue to attach a neodymium magnet:

This freehand-kluge stuff will be discarded when the system moves to the boat, but it will make development and testing much more realistic.

Once the Sewage node is done and I have a source of test data, the next two are in the domain of infrastructure (and will be fun ones). The Voice node is a carryover from my BEHEMOTH and Microship projects, both of which had similar functionality: it has a DTMF decoder to allow commands from a hand-held UHF ham radio, and a speech synthesizer to enable voice responses. The speech strings can be internally generated from the node’s updated copy of all ship data points, or dictated from higher-up when the Hub has something to say. All the parts for this are on-hand, and I’m looking forward to building it…

The other one is the Crossbar node (X), which deviates from my previous 8816-based architecture in favor of a sparse matrix of DPDT latching relays driven by long-chain HC595 SPI shift registers. Working in tandem with the console mixer, this will let any audio or video source talk to any “sink,” introducing such features as enabling the Node V speech synthesizer to be routed not only to the ham radio, but to cell phone, local speakers, Skype session, marine VHF, recorder, and so on.

Latching relays may seem a bit retro when we could do it all with codecs and routing software, but they are media-agnostic, have no appreciable insertion loss, draw no power except during state transitions, and are simple. Video might be a little messy when switching, but the dozen or so cameras around the ship are not genlocked anyway, so I might just cobble a little transition-fader to eliminate the sync glitch.

Incidentally, there appear to be 15 nodes in the plan at the moment, most of which are simple I/O concentrators for a collection of local sensors. If you have Arduino experience and would like to take one on, please let me know… I miss the good old days of development teams and volunteers. Being in the remote forest of Camano is not at all like the heart of Silicon Valley; my best memories of the BEHEMOTH project involve energetic evenings with fellow geeks in the bikelab… often capped with Tony & Alba’s pizza.

Thanks, folks, for your suggestions on my question about where to hang the shingle. I’ve decided to keep the Boat Hacking name for the book about that subject, but the store is more general. The domain will be my long-dormant nomadicresearchlabs, which is about to get a Zen Cart installation. It’s a business name I’ve been using for a couple of decades now, and better reflects the full range of goodies I intend to offer.

I think this is going to be fun, and not only because I really need to make a living while having all this other fun. The initial focus will be on the intersection between mainstream marine electronics and the world of high geekery, along with a few other things that happen to fit. This includes tools and parts for setting up a mobile lab, kits for my own designs, favorite gizmos and gadgets, related publications, and even a bit of NRL surplus (a Microship, anyone?).

The learning curves are steep… online payment APIs, SSL certificates, template overrides, vendor relationships, accounting, and an unfamiliar level of formality regarding inventory. I think the store will flicker to life sometime in February, and hopefully will develop in parallel with the other projects so it won’t be too disruptive (speaking of gain-bandwidth issues…)

2017 Note: that is long gone, and the store is now integrated with this site. I left all that text just for the history.

Sky and Karen are working on the new boat curtains, and early indications are that they will provide a lush alternative to the stark fishbowl look of those large windows (especially at night in a marina). They are made of two layers: a light UV-resistant material outside and a dark blue textured fabric inside… reversable for use when bright interior lighting is a high priority. Attachment is with powerful magnets, still in the experimental stage.

I bought some new Samson Pro-Set docklines last year, and Sky sewed the Seadog leather chafing gear, located where they seemed to make most sense. Over time, we discovered that different mooring situations call for rearrangement of the lines… sometimes with unprotected regions leading through chocks. A few weeks ago, I checked the boat after a big windstorm and found something disturbing:

It was a cheap lesson – I only lost a $36 dockline. But chafing gear is not optional!

Time to update a few variables and drop through a case structure when a command arrives via USB… I’ve really missed this stuff over the last few years.

Posted in Nomadness blog and tagged Arduino, nodes, shipnet
← A Learning Curve Junkie in the Zone of HackeryThe First Node Flickers to Life →