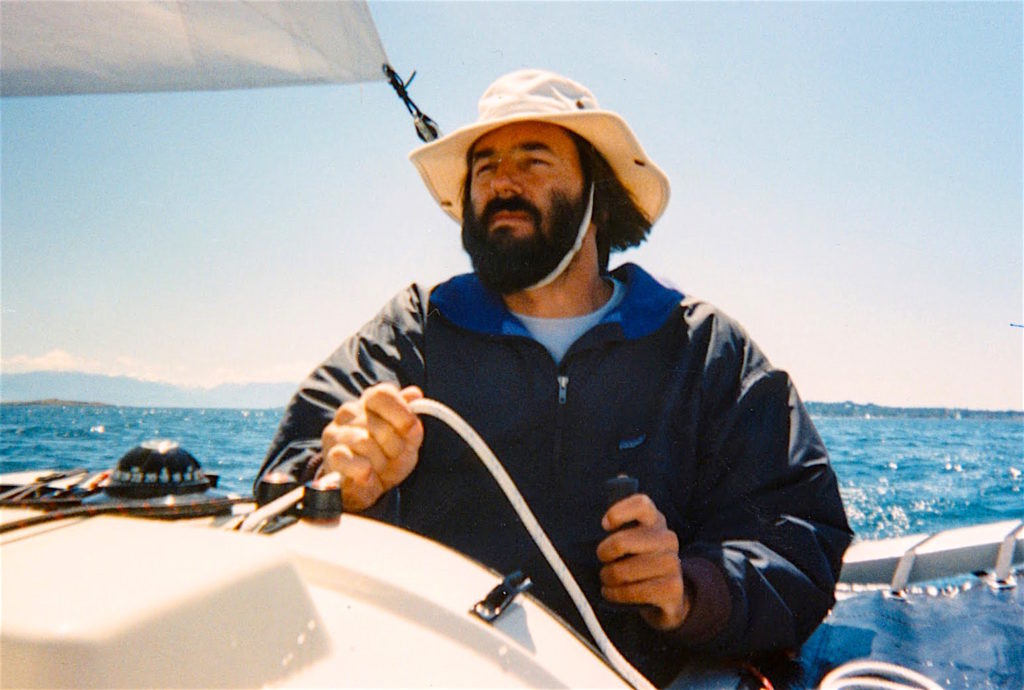 As the time between updates increases, the amount of catch-up obviously increases, complicating the task of doing an update and inducing further procrastination. Clearly, the obvious solution is continuous, real-time broadcast of every moment of my life, thus eliminating the troublesome accumulation of Things Unsaid.

The downsizing I’ve commented on recently has reached its limit, and (lo ‘n behold) we seem to be converging on the very boat that was my planned substrate about a year ago. It occurred to me that even with absolutely first-class help (which I have), the process of inventing a custom boat is time-consuming and expensive. Instead, I may have found a good starting point that will eliminate the need to learn the fine art of hull fabrication — or of paying someone Big Dollars to make me one. (We had gotten very close to adopting the center hull of a Kurt Hughes 23’ trimaran, to be fabricated by Olympic Boats in Port Townsend for about $8,000 before the cost of outriggers, crossbeams, rig, and other conveniences.)

A few realizations helped bring all this into focus, most notably the observation that anything big enough for two people full time is by definition too big to meet my other needs. By accepting the notion that all flotilla members (whether just me, or a dozen of us) have our own boats, the Microship size and weight specs are reduced considerably. Add to that the acceptance of “on-water bivouac” mode for occasional on-board camping as opposed to “live aboard” cabins below, and the whole thing gets back to kayak scale.

As such, I’m flying to Seattle next week to spend a couple of days in a Fulmar-19 trimaran. I have not committed to this yet, but doing so would almost instantly get us close to the desired substrate… whereupon the hacking can begin. The big issues to be resolved are the Fulmar’s performance under realistically heavy load, taking a few key dimensions that affect solar modules and cockpit design, and the structural implications of the still-essential integral trailering capability. The builder says it can comfortably handle my weight plus about 600 pounds; my gut feel is that this is too high and with that load it will be sluggish. I’ll know soon.

Information is also enroute on a Farrier Tramp for sale in Reno, but that’s much more in the “small yacht” category than “kayak-scale micro-trimaran.” Whatever the case, the decision to seriously consider purchasing a working boat and then developing custom systems from there has probably knocked a year off the project. Stay tuned!

This is impossible… I should never have let this much time pass between reports. Countless details are lost, but I’ll try to summarize as best I can. The student projects are moving along on many fronts…

CROSSBEAM/SOLAR (Nathan Hantgin, Dave Quinn, and Joe Kloontz): This project began as the demountable carbon-fiber crossbeams, their kayak interface, and initially the four-bar folding scheme (until it became a weight issue). With the move to a tiny boat, they have moved to solar substrate and mounting, and are well into specification of the NidaCore composite panel based on Robb Walker’s analysis guidelines. Next week’s measurements will help confirm this, but present plan is to back off from the 24-module array and build a pair of center-hinged folding arrays of 10 panels each, measuring 100 X 48 inches. These will have to be mounted in a compliant fashion since the akas flex, and the halves each need to be able to fold on top of the other.

VIDEO TURRET (Robert Lipsett and San Le from Mechanical Engineering; Eduardo Garcia from Electrical): Well underway, this is now an 8″ acrylic cylinder about 10″ high, with a reversible DC motor driving a camera platform through 720 degrees. Cable management is included, as well as an incremental shaft position encoder and a sensing disk that allows detection of end states. I’m planning to install two cameras — one ultra low light (.05 lux) monochrome for security, and a small color one for beauty.

HOST GUI (Andres Albano): Andres has chosen Turbo C++ as the development platform for the graphic interface on the Ampro with Sharp active-matrix LCD, and has already brought up a mouse driver for the waterproof pointer and written a basic menu system. We’re planning to implement the SAME piece of code in a small DOS palmtop in my backpack, linked by 9600-baud UHF packet to the ship.

PACKET LINK (Kevin Schmeichel and Sidart Deb): This involves interfacing the Motorola RNET 9600-baud radio modems with the PacComm TNCs via the modem disconnect header, as well as writing the code in the Hub that redirects its own console from GUI to remote when a connection is detected and verified as a valid user. So far, we have tested the RNETs and figured out the hardware — no software progress yet. Presumably, this code will accept a parallel path via cellular.

HUB (Michael Bream and Chris Tuft): So far this quarter, the Hub team has been primarily involved in helping the node groups get up to speed on FORTH and overall architecture. We’re about to meet and refine the original Hub specs, which have evolved considerably since I wrote them in December.

POWER, SOLAR, AND THRUSTERS (Jason Corley, Jeremy Heath, and Viet Do): This is a big one, with a lot of components (many still undefined). We have not chosen the battery yet, but some of the pieces are coming together — Viet got the Hall-effect current sensors working, a 16-bit A-D just arrived from New Micros, the solar performance monitor is designed, and it’s all going into a single node (instead of the 5 it was spread over in the initial spec).

AUTOPILOT DATA COLLECTION (Dan Yang and Alan Young): The task here is to get GPS, compass, and gyroscope data into the navigation processor. The most recent breakthrough was successful implementation of Bill Muench’s interrupt-driven ring buffer, which allows the one-per-second NMEA-0183 data from the GPS to be handled without becoming bogged down in serial code.

AUTOPILOT NEURAL NETWORK (Brian Chiu and Aamir Panjvani): In what amounts to a rather exotic experiment, this team is attempting to build a neural network that can learn the ship’s performance as a function of sea state and wave motion, then integrate that into the autopilot algorithm to minimize power-hungry overcorrections. They’ve been working on things I don’t know much about, so I’ll try to get them to provide a project summary for your enlightenment. The concept is appealing… a piece of code that learns by observing a human, then does the same thing without the need for explicit algorithms.

So. All this activity has been competing for my finite energy reserves with the establishment of a new base office (done), creation of the monograph series (sputtering along), the ongoing speaking business (two out-of-town gigs in the next 2 weeks), and the endless interrupts and crises of daily life. I’ll spare you the grisly details.

Got a new toy, though! The Microship is now equipped with night-vision binoculars — Russian military issue, 30,000 light gain, second-generation enhanced. These have recently popped onto the market at a fraction of the US commercial cost, and though they have a sort of ruggedly funky engineering style, they seem like good solid equipment that will take the abuse of the aquatic life.

We sent photos of the damaged kayak (no clues to the perpetrator, and no insurance…) to Current Designs, and they’re studying the problem. Of course, if I get the Fulmar-19, they will go back anyway, and the president was very gracious at the mention of this possibility. I may be making a truck trip to Seattle in June…

Dan Yang just spent an evening here, and we revamped the lab security system — he ran wires and installed sensors while I built a circuit board with a couple of 555’s that generates an entry delay. Lovely to conceive, build, and finish something in one sitting!

Our Mosaic server is running well, thanks to ongoing effort by Frank Araullo, Dan Yang, John Studarus, and others. When I learn more about what is being done, I’ll give you the details and fuller credits. Mosaic is being hailed as the killer app for the Internet… you can point and click your way around the world without encountering a single Unix command! Speaking of which, my SPARCstation 1+ is now running in the lab, and is microship.ucsd.edu — the Web and Gopher servers will be moving to this to free up the Tadpole SPARCbook for other use in the lab.

Enough for now. I’ll try, really I will, to make these a bit more current — they are intended to capture the details, not just moments of retrospective analysis!