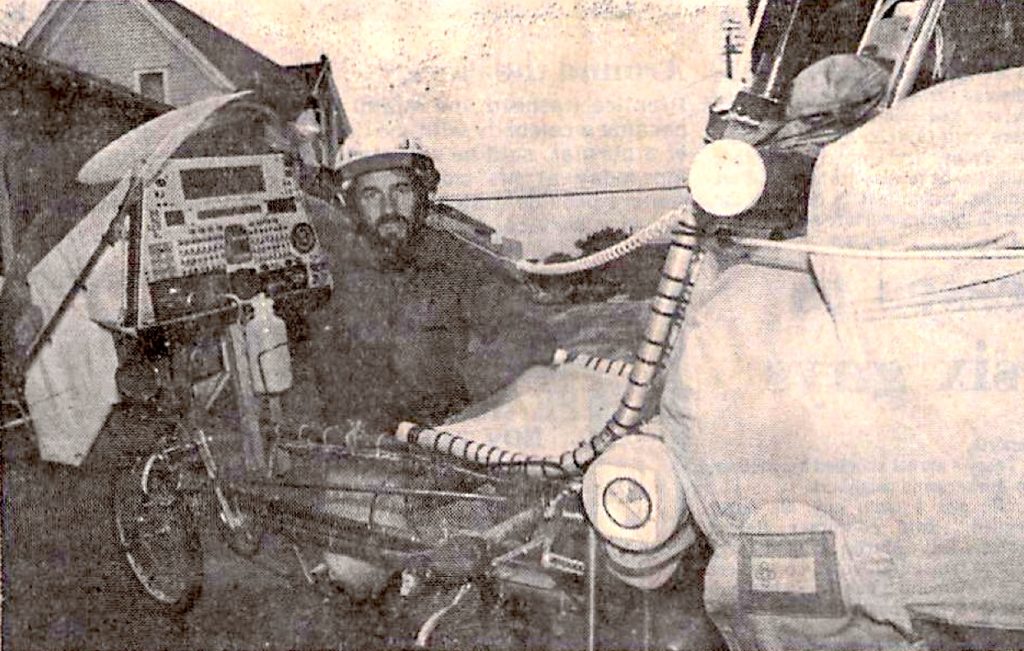 We fell in love with Humboldt County… not just with the place itself, but with the delightfully brilliant artists and kinetic sculpture racers who became our circle of friends. We landed there enroute south, bearing contact info from interesting people we had met at Expo 86 in Vancouver, and left reluctantly nearly 2 months later. This was the local paper’s take on our arrival, enamored with the link between the computerized bicycles and the kinetic sculptures that had come to define the region.

EUREKA – Steven Roberts and Maggie Victor feel right at home in this area — the county that gave birth to the Kinetic Sculpture Race.

That may be because they’re pedaling around the country in contraptions that more closely resemble first cousins to the famous — or infamous, depending on your outlook — human-powered kinetic sculpture vehicles than anything else.

Like the sculptures, their bicycles are specially built and powered solely by human sweat, but they’re not designed to operate over a set course for a weekend and then wind up parked in the backyard.

No, sir. These bicycles are human-powered modes of travel that will eventually take them clear across the country, with layovers whenever and wherever they feel like stopping.

For the couple, who were in Eureka this week temporarily house-sitting for Eureka artist Duane Flatmo, their meandering through the nation is not a vacation, “it’s a full-time way of life.”

“The key to the whole tiling, the thing that makes it possible, is to carry a whole system with me that allows me to have a full-time job,” Roberts said.

Roberts’ conveyance may resemble kinetic sculptures, but he’s gone Hobart Brown, Flatmo and the other kinetic creators one better. Roberts has gone high-tech.

Roberts’ bicycle, built on a frame closely resembling that of a two-person bike, is equipped with no fewer than five computers.

He even has the capability to link with communication satellites to send his stories back to his office in Columbus, Ohio, but he prefers to use the telephone whenever he stops, he said.

And to make matters even more convenient, he carries solar panels to recharge the computers batteries.

In a pinch, or even in rainy Humboldt County weather, a charger plugged into an electrical outlet will do just as well, he said.

Before he added the computers to the front of his bicycle, he often found himself frustrated when he attempted to recall sensations or ideas that occurred to him while traveling, only to have his memory fail him, Roberts said.

“I couldn’t write while riding, so a lot of the details and ideas were forgotten,” he explained. “The cruelest trick of all is that I’d remember that I had an excellent idea, but I couldn’t remember what it was.”

Living on an 8-foot-long bicycle day in and day out and pedaling it around the coutryside may not sound like a very comfortable existence, but the pair said it’s just what they want to do, and they’re extremely satisfied with their life.

This is the first trip for Victor, but Roberts is on his second odyssey through the heartland of America.

He set out from Columbus in 1983 and traveled nearly 10,000 miles, first to the East Coast and then south through the Atlantic Coast states to Florida.

From there he struck west through the southern states, Texas and the Southwest to the West Coast.

He returned to Columbus long enough to write a book titled “The Bicycle Odyssey of a High-Tech Nomad,” meet Victor, and get itchy feet again, Roberts said.

His book will be available later this year or early next year, he said.

Roberts said be had no idea how much money he had invested in his rig, but it was “all I had.”

More work sweat and creative inspiration, on his part and from his friends, went into the bicycle than money, however, he said.

Victor said the idea of wandering through the country, getting to meet and, more importantly, getting to know its inhabitants, appealed to her immediately.

“I had worked in Social Services for six years, and I saw a lot of people in very depressing situations. After a while, that can affect a person,” she said. “I started thinking, “There’s got to be something better than this!”

When Roberts invited her to accompany him on his next trip, she jumped at the chance, Victor said.

Her bicycle is a stripped-down version of his. With no deadlines or objectives to meet, they plan to go “wherever whim and weather dictate,” Roberts said.

They’re headed south now after exhibiting their vehicles this summer at the World’s Fair in Vancouver and they plan to winter “somewhere in the Southwest, then possibly head north along the Rockies in the spring,” Roberts said.

Most of the people they’ve met in their travels so far have been wonderful, they said.

“We avoid the freeways and stick to the backroads where the ‘genuine’ people usually live,” Roberts said. “We choose freeways only as a last resort.”

They met Flatmo, who was also exhibiting his kinetic sculpture at the World’s Fair, in Vancouver and be has introduced them to other members of the kinetic community since their arrival in the county.

Roberts said he likes everyone he’s met through Flatmo so far, but admits Flatmo and his friends like Hobart Brown, may just give the word “eccentric” a whole new meaning.

The current trip will probably last at least 18 months, he said.

“When this one’s done, though, there’ll be another one, count on it,” he added.