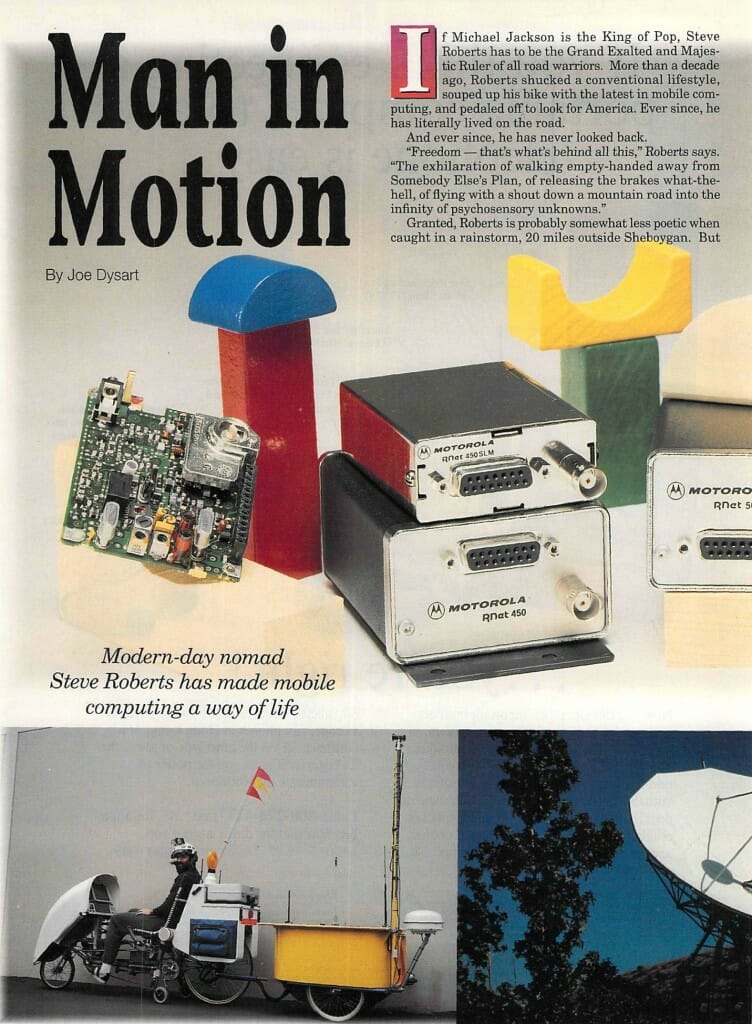 Although most of the graphics are stock photos, I like this article… Joe Dysart takes a long view, nicely blending the human side with the tech. This was written during my 2 years in San Diego, working with UCSD engineering students on the Microship, and the story has a nice sense of inhalation about the new adventure along with the discussion of the tools that enable a technomadic life.

I notice that the cover at the bottom of the page is January 1995, but that the article itself is from the December 1994 issue. Must have been an error long ago during creation of the media binders…

If Michael Jackson is the King of Pop, Steve Roberts has to be the Grand Exalted and Majestic Ruler of all road warriors. More than a decade ago, Roberts shucked a conventional lifestyle, souped up his bike with the latest in mobile computing, and pedaled off to look for America. Ever since, he has literally lived on the road.

And ever since, he has never looked back.

“Freedom— that’s what’s behind all this,” Roberts says. “The exhilaration of walking empty-handed away from Somebody Else’s Plan, of releasing the brakes what-the-hell, of flying with a shout down a mountain road into the infinity of psychosensory unknowns.”

Granted, Roberts is probably somewhat less poetic when caught in a rainstorm, 20 miles outside Sheboygan. But there is no doubt he has earned his beef jerky. At 17,000 logged miles and counting, he has bicycled from sea to shining sea — and then some. There have been countless bizarre encounters, hordes of philosophical insights, and more than a few romantic encounters.

But most importantly, somewhere along the way, Roberts’s whim became a lifestyle. And his bike — which started out as a simple low-rider equipped with a laptop, a modem, and some solar panels — became the “Behemoth.”

“The first bike I rode was in some ways the most elegant,” Roberts says. “It was sleek and efficient, and I rode it about 10,000 miles in a convoluted path across the U.S. But I couldn’t write while riding.”

Oh, the indignity. Fortunately, Roberts says the Behemoth solves the writing problem with the Private Eye, a head-mounted display device that projects a PC screen image into free-floating space, just a few inches from Roberts’ eyes. So while Roberts is pedaling along a country road at 10 miles per hour, he can literally grab his insights out of thin air, and store them for the ages in his onboard Macintosh.

Of course, there are moments — say, when jockeying with taxis in midtown Manhattan — when writing in cyberspace can be a tad impractical. Not to worry. During those times, Roberts flips on the Audapter, a speech synthesizer from Personal Data Systems, to “read” him his E-mail aloud. “I’ve also programmed to Audapter to automatically call and inform police should the Behemoth ever get stolen,” Roberts says.

Being able to reach “someone, somewhere, anytime, from anywhere,” also become paramount the longer Roberts found himself on the road. So, in bringing the Behemoth to life, Roberts designed in two cellular modems, a ham radio, and a custom-designed Omnitracs terminal that enables him to link up with the Internet from anywhere in North America.

Still, no road warrior is truly free from the constraints of location if he cannot jump off the Behemoth at will, trudge off into the wilds for a hike — and still be in direct contact with his friends and colleagues. Roberts’ solution: Simply take along a fanny pack outfitted with a Hewlett-Packard Omnibook 486, a Motorola RNET wireless modem, and a Motorola NewsStream text pager.

Even if he is caught up a tree, waiting for a grizzly to get bored and leave, he can still chat online with a pal.

“The Omnibook is a nice compromise between a laptop and a notebook,” Roberts says. “It’s real little, but the keyboard is still big enough and comfortable enough to work with.”

Besides attempting to satiate Roberts’s unending quest for adventure, all the technological toys also enable him to earn his bread and butter as a freelance writer. Over the years, he has written countless articles about his experiences, authored a couple of books, and now finds himself regularly sought after as a public speaker.

Roberts says many people wonder how anyone could be so rootless — so utterly alone without a home or a community. But he sees things differently. “The Internet is my home,” he says. Wherever he goes, he knows that with a few keystrokes, he can hook up with that friend in Malaysia, catch up with a relative in a distant town, or even stumble across a potential romance just around the bend.

“The Net is full of playgrounds, a mad and bizarre place rich with variety,” he says. “I’ve never found a loud, smokey bar that can even begin to compete with the Net’s electronic pubs. For me, physical location is meaningless. Relationships develop because brains are compatible, not because the parties happen to live in the same town.”

Indeed, Roberts has become so enamored of the Net that he uses it as a primary measuring stick to determine if a new friendship will flourish or wither. “When I meet someone and realize that we should remain in touch, I quickly warn him or her that I cannot maintain an effective relationship with anyone who is not online,” he says.

Ironically, now that Roberts and his technology are completely in tune with the road, he is setting his sights on another challenge: the high seas. Beginning in June ’95, he plans to set off into the Pacific Ocean from British Columbia with a 260-pound, 19-foot trimaran that will be loaded to the gills with the latest in mobile technology.

His plan is to hug the coast for while, nose into Canada’s interior via river, cruise down the Mississippi, trace around Florida via the Gulf of Mexico, and then head up the Atlantic to points unknown. Predictably, he has no real timetable. “I think if you become too concerned about destinations, you miss the most important part: the journey,” he says.

As with the Behemoth, Roberts will receive plenty of free technology for the “Microship” from his corporate pals. But he has found additional help at the University of California at San Diego, where a group of interning engineering students is trading its time for some real-world experience. One of the students’ biggest challenges: building a boat that can run on sail, solar, and pedal power.

Ultimately, Roberts hopes the Microship will be the first of a fleet of nomadic boats to roam the world’s waterways. He currently keeps in contact with about 15 other would-be aquatic adventurers, who may form the core of a “flotilla.” The idea is to network the whole shebang (you guessed it) via the Internet.

This go-’round, there will also be another big change. For the first time, Roberts plans to take along a female companion, Faun Skyles. But he-man types shouldn’t fret. Skyles will be sporting her own boat, to ensure that Roberts travels with at least most of his autonomy intact.

“Life is only once, and slips by so smoothly that you can get away with coasting and still look pretty good,” Roberts says. “I try to think about what I really want, and grasp it with unshakable passion and focussed desire. For me, everything else is secondary.”