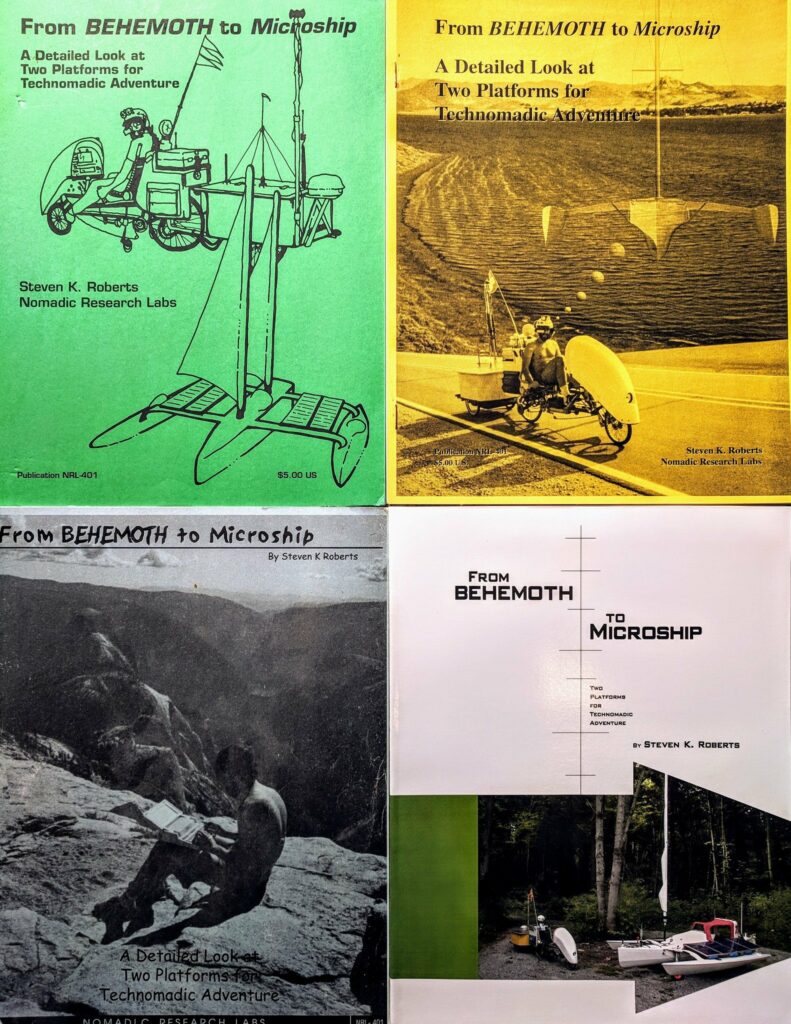 As the project grew more complex, the little “daily updates” to the team became longer and more polished. This is the last of the month-long collections; going forward each will be its own archive post. Here, as we near the end of the first quarter’s student projects, we are beginning to re-think the entire Microship system design…

The four editions of From BEHEMOTH to Microship are shown above; the green one in the upper-left was released about this time.

Long time since last update! I’ve been completely immersed in all sorts of things, the most time-consuming of which have been the production of our first technical monograph (NRL-401, due out Wednesday in time for a computer show in Los Angeles), a house guest from the frozen East, and a back injury that at last seems to have healed but made EVERYTHING more difficult for the past couple of weeks.

I was browsing the Web the other day and checked out the electronic edition of the Encyclopaedia Britannica. It’s quite amazing (as are many things one finds via Mosaic)… I looked up BEHEMOTH and found:

Behemoth, in the Old Testament, a powerful, grass-eating animal whose “bones are tubes of bronze, his limbs like bars of iron” (Job 40:18). Among various Jewish legends, one relates that the righteous will witness a spectacular battle between Behemoth and Leviathan in the messianic era and later feast upon their flesh. Some sources identify Behemoth, who dwells in the marsh and is not frightened by the turbulent river Jordan, as a hippopotamus and Leviathan as a crocodile, whale, or snake.

This is amusing, as the original working title of the Microship was LEVIATHAN.

It is fitting that I look back a bit at the project’s early history, for the past few days have seen a rather dramatic re-thinking of the overall structure. While I’m quite happy with control and communication system development, it has become clear lately that the QE3 is getting a bit too big. In short, it was starting to look much too much like a yacht. Not that anything is WRONG with yachts, mind you, but somewhere along the way our original objective became obscured. Check out this June, 92 posting to the technomads alias:

The idea that has emerged from all this is a sort of amphibian kayak (or baidarka), with a recumbent drive train as well as paddling capability, solar panels for motorized assist whenever possible, provision for sail and/or kite propulsion, deployable outriggers to add stability, and the ability to switch to land mode through attachment of mountain-bike wheels. Clearly, such a machine will be long and clumsy on the road, and this is not to be its primary mode, but it is very important that it be able to survive on land without falling apart or causing traffic jams (ruling out catamarans). Given the space, a small folding mountain bike could be stashed on board (raising the possibility of using the latter to tow the beast instead, simplifying steering and mechanics, allowing a strap-on carriage instead of hard-mounted waterproof bearings, etc).

This sounds like a whole different project from what the Microship has become, and I think that somewhere in between the two extremes lies the solution. The factors that induced growth included the assumption that I’d have a full-time on-board companion, the desire for comfortable below-decks accommodations, and the relentless seductive pull of gizmology that eventually adds up to a major load no matter how tiny the individual components. Somewhere in all this, a few fundamental questions have to be answered, not the least of which are whether or not this should be considered a “live-aboard” vessel and how much blue water (offshore ocean) I anticipate.

This is all a subject for much pondering, and I’m not ready to explore it here just yet (besides, I’m exhausted after a very full day — went sailing on a Tremolino 21′ trimaran today and had dinner with my likely new management team). But I do want to report that the 30-foot design I’ve been assuming and writing about is changing to something else, smaller and lighter. The latest weight study put it at about 5,000 pounds! We’re looking at catamaraned kayaks, a smaller trimaran, and variations on other themes. Stay tuned!

You are invited to attend the final presentations of the ECE-190B class that has been working diligently on control system projects this past quarter. It’s taking place this Tuesday, March 15, from 3-6PM. We will meet in U-413, room 2 (contact me for details). Each team will have about 15 minutes to explain what they have accomplished and how it all fits together, and if you’re interested in the distributed control system based on the New Micros FORTH boards you will get a lot out of this event… ESPECIALLY if you are planning on joining the project in the Spring quarter.

I hope to see you there!

Just a quickie tonight — I wanted to let you know that things are getting back to normal (whatever that is). The project went on hold for a week or so there as finals week passed, I did a trip to LA, and then entertained my 81-year-old dad, who flew from Louisville for a Spring Break visit. Operations in the Microship lab were reduced to basic maintenance and email-answering only.

Spring Quarter is now in session, and we had our first meeting of the new project group this afternoon. We’ll be having intensive one-on-one meetings over the next couple of days, and then forming project teams — most likely centered around solar and battery management, fuzzy-logic bilge pump control and general data collection, thruster control, and autopilot/navigation system. One interesting spinoff expected from all this is a FORTH fuzzy-logic toolset that will certainly be publishable, and perhaps marketable. From last quarter, we have reasonably stable working systems for audio, video, and serial crossbar networks (with some repackaging necessary on the latter), as well a reliable network infrastructure and forward progress in various other areas. The ship downsizing is having the desirable side effect of reducing the number of processors and increasing integration, so even this aspect of the project is becoming sleeker. Stay tuned.

I have received four 30-watt photovoltaic modules from Solarex (with normal SX-series packaging on .090″ aluminum substrate) as well as the first sample of the 24 units that will actually be used (a very thin, lightweight Tedlar sandwich). The four will be the test array for the solar-management project coming up, and we’ll start looking into adhesives, honeycomb substrate thickness, cabling, and thermal issues using this sample.

Interest is developing in the Ames (mechanical engineering) department — I’ll know in a few days if we’ll have projects this quarter involving pedal/thruster design, folding crossbeam assemblies, trailering/suspension hardware, and bay pressurization system. If all goes well, we should see significant cross-pollination between ME and ECE groups working on different but interlocking aspects of the overall system…

As I reported in the last issue, downsizing is now a major priority, and I’m toying with some rather radical ideas. I hope to give you a clear picture of the new design within the next week or so!

Finally, the Los Angeles (Pomona) trip went well. I was accompanied by TJ Tyler and Annette Loudon, and we did three days of booth duty, answering a barrage of questions about the bike from the relentless crowd. We sold about 60 of the new “From BEHEMOTH to Microship” monographs, as well as half that number of books. There seems to be interest in the new publication series, so we’re proceeding with plans to issue technical reports in hardcopy.

These reports should start coming a bit more frequently again — breaktime is over, and we’re back at it!