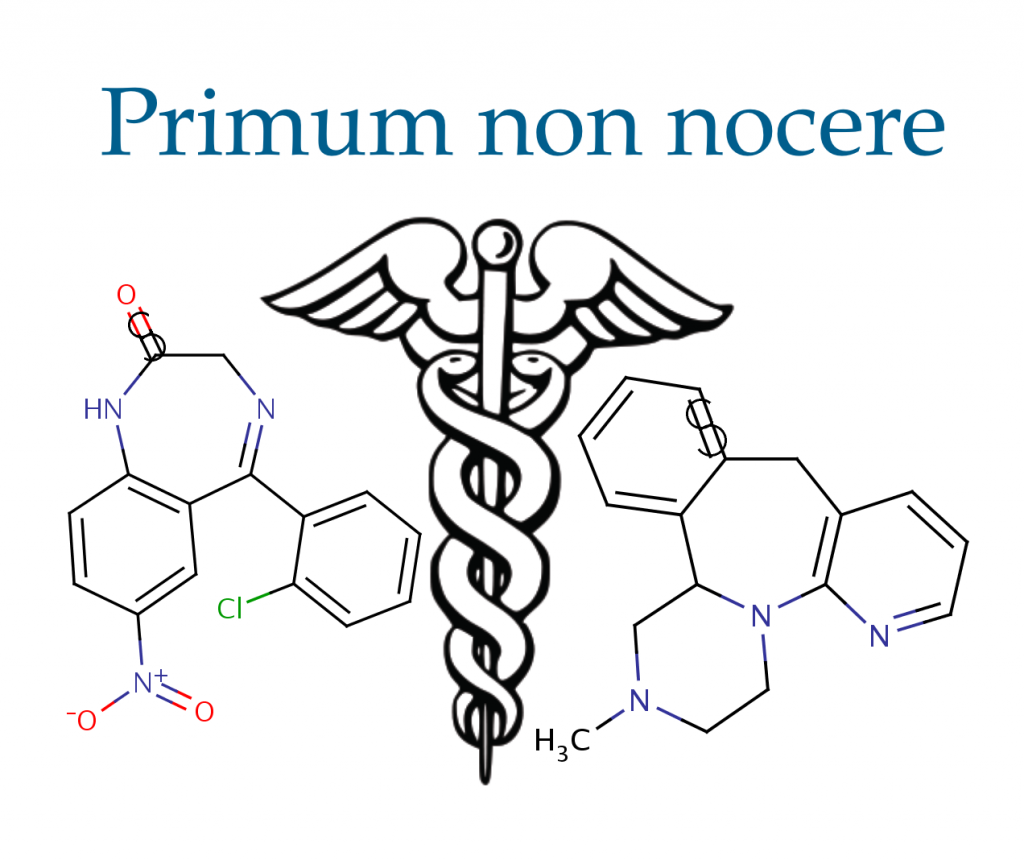 This article is my own theorizing based on a systems-engineering approach to neurological analysis. In other words, please note this disclaimer and don’t make life-changing pharmacological decisions based solely on this! I present it as a data point of possible interest to others affected by similar phenomena. (There is related subtext in the graphic above, which I created after being injured by a careless shotgun approach to therapy, but that is another story… though all too common.)

A frustrating change of perception

After being diagnosed with depression, a dear friend switched from 15 years of Prozac to the SNRI drug known as Effexor, and took it for a few months before finding the side effects so unpleasant that she decided to quit. This is a famously difficult drug to escape, and online forums are filled with nightmarish anecdotes… nicely summarized by this comment from a Reddit thread:

“Get on Effexor to treat your mood disorder. Stay on it because you’re terrified of what happens when you miss a couple days in a row.”

and this from a forum:

My friend approached the problem with care, sticking to a schedule of tapering over four weeks, then at last took her final fraction of the prescribed dose. A nightmare immediately ensued, with intense anxiety, pain, and the classic “flu-like symptoms,” but she persevered and managed to keep her dosage level at zero. (It should be noted that some people take as much as 2 years to taper off this drug, so that may have been dangerously rapid.)

Her acute discontinuation symptoms subsided after a few days… with one exception. Her sense of smell was broken.

She did not suffer anosmia, which is a complete lack of olfactory sensation (associated with a wide variety of causes including severe infection, tumor, epilepsy, COVID-19, or certain neurodegenerative diseases such as Parkinson’s — see a full list), but is instead a selective reduction in the sense (sometimes called partial anosmia or hyposmia). In addition, she began to experience a disturbing phenomenon known as phantosmia, or the sensation of strong smells that don’t exist… usually smoke or “burning electrical cucumber.” At the same time, a prized fragrant rose smelled like cardboard.

Olfactory hallucinations most often follow a reduction in acuity, in a mechanism analogous to automatic gain control (AGC):  increasing the brain’s efforts to make sense of missing input can result in assigning meaning where none exists.

There is no shortage of literature about SSRI/SNRI discontinuation syndromes, a phenomenon admitted with considerable reluctance by the industry.  Effexor (Venlafaxine) is a serotonin-norepinephrine reuptake inhibitor with a short half-life, and the central nervous system adapts its neuroreceptors to changes in neurotransmitter levels (a compensation that likely explains the slow onset of effects when patients first begin taking this class of drugs). When the drug is withdrawn, there are temporary deficiencies of synaptic serotonin and norepinephrine, as well as a hypoactive state of receptors that can persist for weeks. Along with secondary effects on other neurotransmitters, this explains the acute full-system discomfort (and serious risk) of the discontinuation syndrome.

But why a long-term perceptual effect on the olfactory system?

Researching this, I began to find an unexpected connection… Effexor is often used to treat phantosmia. It is suspected that there is a link between mild depression and the detection of non-existent odors, a theory that has gained additional traction from the improvement of phantosmia after repeated transcranial stimulation used to treat depression. If this is indeed the case, we may be seeing a rebound effect similar to what happens when you stop taking a medication, with the original problem returning in stronger form. (When repeated, this is known as the kindling effect, where each withdrawal leads to an increasingly severe return of symptoms.)

So there is one possibility, though unlikely. Our patient had no issues with her olfactory system prior to this event — on the contrary, she considered herself to have a more acute sense of smell than those around her. This makes her case particularly frustrating. There are no concomitant symptoms that would suggest a lesion of the glossopharyngeal nerve (CN IX), so we need to look deeper.

Interestingly, the specific smells reported by patients with phantosmia have some broad similarities. Burning smells are common, as are those of decay and offal. Very few people report hallucinating roses or wine.

Perhaps this can be explained by the brain’s data-reduction architecture. Just as we have structures in the visual cortex that extract features and tag them with properties (instead of passing a huge sea of pixels upstream to higher cognitive functions), our olfactory systems aggregate axonal inputs from randomly distributed receptor cells onto structures called glomeruli.

These create a way-station of sorts, with all the olfactory receptor neurons that express an odorant converging on a glomerulus, which then expresses the resultant to the olfactory cortex. This means that a given real-world smell results in a “constellation” of glomeruli activation potentials, collectively expressing the components of the odor without overwhelming the system with raw data. This is pattern recognition, similar to the way we receive a spectral analysis from the basilar membrane in the ear, containing readily detectable relationships (such as three formants with specific amplitude and frequency ratios defining a certain vowel regardless of the fundamental pitch of the utterance).

It may be that certain survival-critical odors have been hard-wired into this system, maximizing the brain’s ability to detect a threat before stepping into a dangerous situation, eating something deadly, or otherwise becoming a factor in natural selection. The tendency of those with phantosmia to report this class of odors well out of proportion to the palette of others in the environment may be a side-effect of our system architecture (just as visual hallucinations often involve faces, animals, and insects).

But why would our patient be experiencing this in the first place? What is the connection, if any, between the SNRI discontinuation and a mix of phantosmia and partial anosmia?

The conclusion of this paper is a provocative link that may be our culprit.

There has been research linking phantosmia with a depressed level of the inhibitory GABA in the CNS. In addition, there have been unrelated research projects linking SSRI/SNRI discontinuation with disinhibition of the excitatory glutamatergic system. Discussion of this can get lost in double-negatives, but in essence, from the perspective of many parts of the brain, GABA is a brake and glutamine is an accelerator (a grotesque simplification, but instructive).

In one test, patients with phantosmia were seen to have reduced CNS GABA levels in the cingulate, right and left insula, and left amygdala. This is particularly interesting, as a retrograde projection from the anterior cingulate cortex to the anterior olfactory nucleus appears to have a role in attention to olfaction… which reinforces our “automatic gain control” theory.

People often think of the antidepressant withdrawal syndrome as just being a matter of getting neurotransmitters back in balance, but it is more complex than that. The drugs damage an autonomic system, downregulating receptors (reducing their number), and thus removing some of the tools used to maintain homeostasis.  Discontinuation of the drug introduces CNS instability that manifests itself throughout the system… hence the extremely wide range of reported effects that include intense “brain zaps” and my own long-term crosstalk between lateral eye movement and somatosensory perception in the hands caused by a whiff of Remeron many years ago (6 half-doses, prescribed off-label for sleep). There is an enduring mythology that it is just simple imbalance, but instead we are dealing with a dynamic self-correcting system… and there is ample evidence that this class of drugs causes actual damage from which recovery can be excruciatingly slow.

It would be interesting to do a test with GABAergic drugs (or receptor agonists) and attempt to recreate a phantosmia episode… that may confirm part of our theory, though not necessarily point to a useful solution.

The hopeful note in our patient’s case is that she reports a gradual improvement as the years pass. I believe she is being analytical about this and not just expressing adaptation to a static condition.

2019 footnote: I am happy to see more open discussion of this issue. This New York Times article explores tapering with micro-doses and notes the increased awareness of the need to take it SLOW.

Afterword: the Neurobiology of Everyday Life

In 2014, I was delighted to find a lecture program (MOOC) on Coursera presented by Dr. Peggy Mason of the University of Chicago: Understanding the Brain: Neurobiology of Everyday Life. This was fascinating and well-presented, and it rekindled my lifelong fascination with neural science… prompting me to dive into her excellent book as well as Kandel, Blumenfeld, and other texts.

I’d like to credit Dr. Mason for presenting the excellent overview of the nervous system that sparked my renewed interest in this subject (including acquisition of textbooks for independent study that has persisted ever since). It is a field daunting in scope, and casual online research can quickly become overwhelming. This and the other resources linked above are superb, and I recommend them highly.

Note from early 2018: the course is being offered again. Highly recommended!