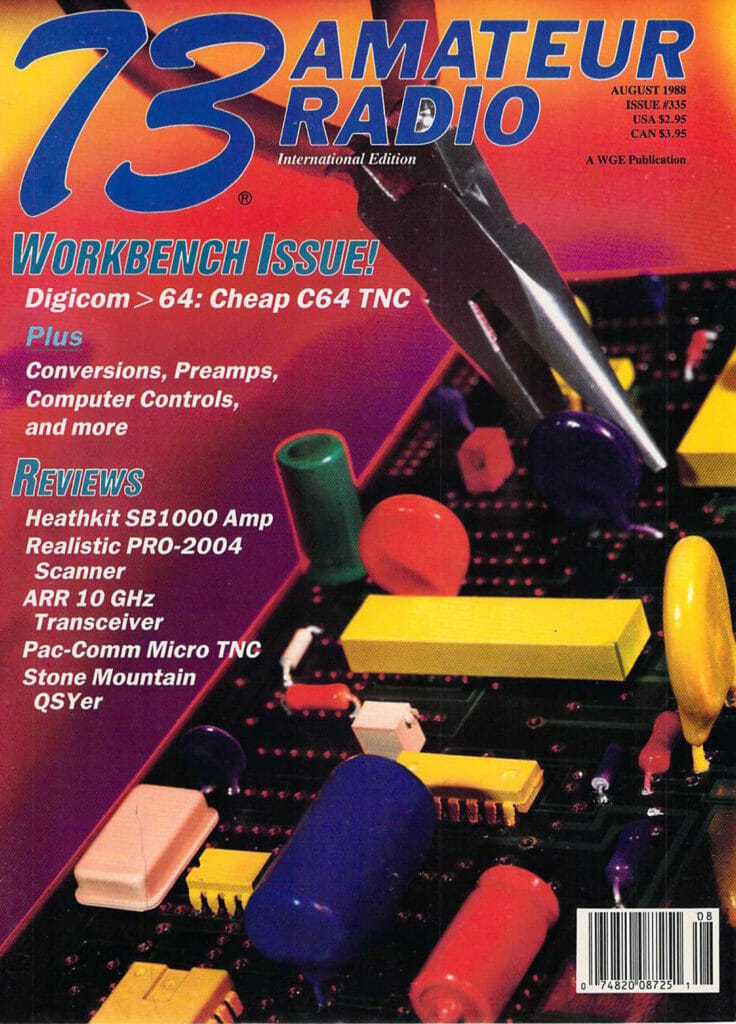 When I first set out on my strange 8-foot-long, 140-pound bicycle back in 1983, I received a lot of serious advice from my Ohio neighbors. “Never turn onto a road with ‘mount’ or ‘hill’ in its name,” said one seasoned cyclist. “Never let anybody nicknamed ‘Moose’ ride your bike.” “Carry a weapon, but make it a light one.” “Don’t mess with camp cooking gear.” “Drill out your toothbrush.” “Get a lighter tent.” “Make everything you carry do double duty.”

I noted that most of the advice had something to do with weight, which is not unreasonable given the fact that a good percentage of the bicycle-touring lifestyle involves hauling possessions up steep hills. The Winnebiko system has since grown to over 275 pounds, and believe me… I feel them all.

But it’s worth it. With every QSO, every piece of packet mail, every chapter completed via the handlebar keyboard and on-board computers, I become more and more delighted with my solar-powered mobile-radio-telecommunications system. I have broken the chains that once bound me to my desk, beat the freedom-versus-security trade off, and moved into a life of adventure in Dataspace — a constant flirtation with that sweet piece of asphalt I have come to call the Other Woman. This rhapsody is all quite lovely, but I have one BIG problem.

I’m addicted to gizmology. I love the gleam of blinking control panels, the birth of complex systems, the precise crackle of distant voices amplified through the tight spectral aperture of a fine radio.

“Some problem!” you say. “There ain’t an OM alive who wouldn’t deed over his solid-gold Vibroplex for a toy collection like that.”

Well, that may be, but the catch is that I still gotta pedal it.

Given that constraint, I have a very strong motivation to maximize efficiency. How light can I make it? Can an amplifier (or a computer, or a battery, or even a piece of coax) do double or triple duty? Can interconnections be software-managed to minimize the number of heavy, inflexible switches and wires? Can I eliminate cases and replace only the metal necessary to provide adequate shielding? Are there “sleep” modes available that let me maximize battery life? Can I reduce battery weight by increasing antenna weight — or would the opposite make more sense?

With the understanding that more and more hams are interested in portability (now that equipment size is finally making it worthwhile), I’d like to maunder on for a bit about some of the ideas that have emerged from the 5-year Winnebiko project…

Let’s take the obvious points first. Keep it light. It took me years to learn that putting a lot of light things together gets heavy — and shaving away lots of ounces adds up to pounds. Amazing.

As the most-significant digit of the Winnebiko’s revision number increments for the third time (yes, there was a 0.1), I am drilling holes and machining away excess aluminum, G-10, and plastic. Mounting plates can be perforated, angle brackets shaped, circuit boards trimmed, cases eliminated, tools drilled. New logic, wherever possible, is surface-mount. The steel base of my Bencher/Pacesetter keyer is history. And I’m taking a hard look at former indispensables like juggling balls, frisbees, kites, water filters, DB-25 spares, flares, and the like — weighing their value beside such things as LORAN-C boards and mast-mount preamplifiers.

Closely allied with this issue is the ongoing quest for lighter, smaller versions of existing tools. Two manufacturers that I know of (Leader and Dolch) now have combination LCD oscilloscopes and DMMs — a bit heavier than my existing DMM but well worth it for the added functionality. The MFJ-313 VHF downconverter plugs into a 2-meter handheld to replace the Radio Shack weather radio while saving 80 grams (and many new HTs like the Yaesu FT-23R can be tricked with a jumper change into tuning 162.55…). Even the obvious — like buying an Xcelite screwdriver set to replace a bunch of Stanleys — can knock nearly a pound off the mobile tool kit.

This can be a tricky one. There’s a big trade-off here: The more functions you perform with each piece of equipment, the fewer you can perform simultaneously. Let’s look at cables, for example, since wire is heavy.

On the bike, I have a standard “power extension” cable with an RCA on one end and a coaxial power plug on the other. The RCA fits any of eight jacks on the console (system voltages, solar charge current, etc.) and the coaxial fits entertainment electronics, tent lights, and a jack on Maggie’s bike. But the same cable, used in reverse, also allows her UNGO security sensor to be slaved to my bike’s system.

Obviously, I can’t do this while watching TV on the Watchman under bike power, but then… why would I want to? The trick therefore is to make multifunctional cables for functions that don’t normally go on at the same time.

Maggie’s bike carries a 5-watt Solarex photovoltaic module, and mine has a pair of 10-watt units. Due to the need for wire antennas on QRP, I only operate HF when we’re stopped for a day or more.

I have found to my surprise that quality IC sockets hold chips better than I expected. For a few thousand miles, I kept a camping pillow bungeed over the main logic board, but it turned out to be unnecessary. Anything delicate with significant mass, of course, needs special treatment… I mounted the Yaesu 290 on a foam pad, held down with springs that pull it slightly forward into an undersized console cutout lined with channel-rubber. The H-P computer lives in a foam-lined case resting atop clothes and tent fabric. And the new radio pack with the OSCAR and HF hardware will be a case within a case, nestled snugly in soft foam. Don’t be tempted to spring-mount a system if overall balance is critical — the whole mess will exhibit resonant modes that require heavy damping hardware.

Moisture can be a serious problem outdoors, of course, and not just from rain. As I mentioned in an earlier article of this scries, the console electronics on the Winnebiko are well protected by the fairing, fabric side-panels, and velcro-on cover. But condensation can be a real problem, and fighting it calls for either a true hermetic seal or free ventilation — the former to maintain a truly dry environment and the latter to quickly undo the damage if you don’t have the former. I have found better results from leaving the whole system outside on a cold night instead of bringing it into a tent filled with the moisture of human bodies, and a simple tarp in combination with the waterproof fabric cover keeps the worst of the condensation at bay.

And then there’s heat. Normal electronics can withstand the temperature range of this planet, but parking anything in New Mexico sunshine invokes a phenomenon known as solar heat gain, which takes effect when air spaces exist under transparent covers. Examples of this .situation are: LCD, panel meter, and Lexan fairing. Solar heat gain can be tragic — it blew my computer’s mind in Mendocino. I have found two solutions: a space blanket, shiny side out, will keep any piece of equipment comfortably at ambient all day long; failing that, a DC fan running from the solar panel moves enough air to keep the temperature under control. Mine is a little EG & G unit from a hamfest, drawing 270 mils from the 12-volt supply. On hot sunny days, that’s about 40% of the output of one of my 10-watt photovoltaics. (The space blanket works much better, of course, but it’s messy and has to be tied down in the wind.)

Salty residue on antennas can soak up RF like a dummy load. And don’t forget the effects of dirt on cooling: If for some strange reason a piece of equipment requires an internal cooling fan, keep a close eye on filters (a mixed blessing if ever there was one).

All of the factors mentioned so far impact the choice of construction technique, right down to IC packaging. Keep connectors to a minimum… but use them wherever necessary to simplify service (another trade-off). Use R-N quick-connect instead of wirewrap for logic prototypes — or printed circuit boards if possible. I’m discovering in the design of Winnebiko III that it can actually be cheaper to prototype at the PCB level. Depending on complexity and quality, custom boards can be delivered within 2-3 days from CAD artwork for $50-250. And — delight of delights — it’s turning out that there is no real premium (other than assembly effort) for making surface-mount instead of DIP boards. SMDs are the devices that have made the new class of personal electronics, including micro-sized HTs, possible.

I’m doing PC boards for the easy stuff that requires little debugging (memories, cross- point matrices, and the like), and sticking with Quick-connect insulation-displacement prototyping boards for the logic that changes shape every time I see some new chip that looks interesting…

…which is a good point to start talking about software. In the past, we as a class (tinkerers, experimenters, engineers, and techs) tended to do most of the fiddling in hardware. Proto-boards, #22 and #30 wire, wire wrap tools, soldering irons, and junk boxes were always close at hand. The problem is that all this stuff is heavy — and not the best way to protect the investment in technology.

The biggest flaw in the Winnebiko II design is that, despite the five microprocessors, there is little architectural flexibility.

Front-panel switches are necessary to change modes, bring up supplies, override the serial communication matrix, control battery charging, and so on. This is heavy, and lends itself poorly to further development (largely because any significant design change implies considerable down time).

The new bike will be considerably different. A 16 x 16 analog switch matrix under computer control allows any combination of audio sources and sinks to be connected together — with spare points handling inter-processor communication outside the domain of the high-speed LAN. A window on the graphic display can be used to edit special interconnects, but normally the processor will simply toggle the 256 crosspoints as dictated by the tasks in progress (ranging from a cellular phone call through the bike helmet to OSCAR operation with two transceivers and a patch to the tape recorder). Touch-tones, mike audio, mixer inputs to the console speaker — all are processed through this board, and NONE of them require a drop of solder or a twist of the present clunky rotary switch that’s a pain to use and even harder to “edit.”

Other functions appear in software as well: battery charge management, temperature control, the transmission-control shell, navigation, and just about everything other than basic survival hardware (lights and horn). Knowing that I’ll never get some of these things right the first time, the use of software control makes good strategic sense from an engineering standpoint (butane soldering irons notwithstanding).

And best of all, it cuts weight while adding capability. Another trade-off bites the dust — which is what it’s all about!