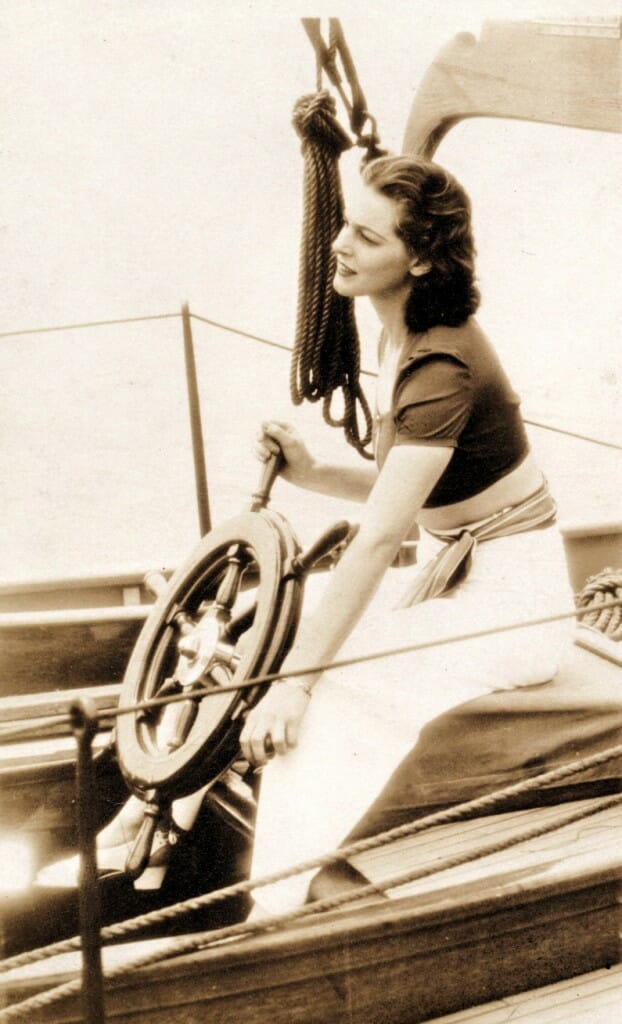 My mother worked for the Powers Agency as a fashion model in New York back in the 1930s, and it was fascinating, while working through the old family papers, to discover a wealth of photos and other archives from this epoch of her life. My favorite, by far, is this gem… in which St. Clair McKelway, the managing editor of the New Yorker, recommends her in glowing terms to the Barbizon Hotel for Women (“Sorority on E. 63rd St,” according to Vanity Fair in that link).

This was excerpted on NPR’s All Things Considered on October 21, 2014. The writing here is delightful; the sentiment, astonishing. Enjoy…

I have your letter of September 26 telling me that Miss Phyllis McCarthy of Worcester, Massachusetts, has given you my name as a reference and asking me if I would give you “my opinion as to the desirability of Miss McCarthy, which would of course be held in strict confidence.” It certainly is a coincidence that you should write me just at this time, when the desirability of Miss McCarthy is practically the only thing on my mind. I’ve been telling everybody I know how desirable she is and haven’t even asked them to keep it in confidence, since, as far as I’m concerned, my opinion of Miss McCarthy can be put in electric lights over Broadway or written in the sky. I never thought I would be confiding in a hotel manager about her but you asked for it, Bruno, so here goes: Miss McCarthy is just about as desirable as a girl can be. She is tall, just about the right height for a six-foot man, blond, with longish hair that has a way of falling all around her face in spite of the efforts of hair dressers and herself to keep it orderly. It is nicer when not orderly.

Her features have a lot of character and they all stand out clearly and boldly. There is nothing sneaking or understated about her nose, mouth, eyes or ears. They are all fair-sized and forthright. They have a symmetry, of course, which sometimes fools an observer like myself into thinking that she is a small girl with a tiny face; this is just an illusion and you can put it down to my dreamy state of spirit when it is placed alongside Miss McCarthy’s desirability. Miss McCarthy is no pretty baby; she is strong and healthy and probably could lick an average male office worker hands down in a free-for-all, catch-as-catch-can-battle. To keep herself in this condition, which is used mostly as a reserve defence, like the German West Wall, she rides on occasion, handles the jibs and sometimes the helm of a sloop, dances until four and fights her way in and out of the Stork Club, using her escort as a club. She pretends sometimes to be demure and feminine, which she no doubt is when she wants to be, but a man would be a fool to rush those fortifications of hers without first battering them down with flowers, hamburgers, exotic fruit, steak, symphonic music, French pastry, and honeyed words. Even then he is taking his life in his hands; but in spite of that he would be a bigger fool if he didn’t run the risk.

I could go on like this for the length of a book. What else do you want to know? She has a cheerful disposition on the whole and laughs a lot, but not in a silly fashion. She dresses beautifully and is inclined to buy a grey suit for $150 or so when she hasn’t got $150, much less a so; she is apt, also, to choose a grey suit because she happens to like that particular grey suit and entirely disregard the fact, in doing so, that she has neither grey shoes, grey hat or grey gloves and consequently will be forced to buy these, too, with what she has left out of the $150 or so she didn’t have in the first place. The charming thing about all this is that she will look wonderful and more desirable than ever in the grey suit, grey gloves, grey hat, etc., and that, if she gets more desirable than she is now she will drive me nuts — and you, too, Bruno, if you get to know her even casually, old fellow.

But why should I be telling you all this anyway? If I find you, or anybody else at your hotel, using this information for anything other than to try to bring Miss McCarthy into that congenial group of young women you speak of in your letter, I will tie lead weights on your ears, Bruno old fellow, and drop you into the cold pool in the Turkish bath at the Biltmore. Remember that. And remember, too, that if you want to tell what I think of Miss McCarthy to the world, you have my permission to do so. I would suggest a suitable neon sign about twenty feet high, say, and thirty feet long, extending from the extreme south side of your building around the corner to the extreme east side, with the words, “Miss McCarthy Is the Most Desirable Girl in New York – St.Clair McKelway, the New Yorker.” Or, “Is Miss McCarthy Desirable? Boy! Says McKelway.”

If I can be of any further service to you just call on me.

There is a very curious footnote to this story… beginning with a rather disturbing article published by a fellow who acquired a scrap of paper upon which Phyllis had written her budget. She had tossed this out her 15th floor window, it landed on a third-floor terrace, and triggered obsessive fascination (it was the Barbizon Hotel for Women, after all). Hank, the recipient of her discarded trash, shared it with George, who then played detective and created a fantasy vision of my mother-to-be (“comparatively young, slender and attractive, with a good mind and a nice bringing up”). His resulting newspaper column is surreal, especially from today’s perspective on such matters as privacy. You can tell he gave this matter considerable thought, publicly sharing the details including her name:

The story gets even stranger. George’s painstakingly detailed portrait of Phyllis, deduced from her weekly budget, caught the fancy of a young man named Milton on a farm 65 miles away in Frenchtown, New Jersey… and of course he wrote her a letter:

I don’t know if she ever answered him… I imagine the whole littering incident might have creeped her out a bit (it certainly should have), and these three documents were then tucked away in a box, untouched, until she unearthed them on a whim a quarter-century later to show me the epic Barbizon paean by St. Clair McKelway. Perhaps we had been having one of those birds and bees talks, but this was no longer academic. Her manner was very strange… with girlish giggles and wait, is she actually blushing?

I was about 13 when this happened, mystified by the deliciously retro purple prose, rich with details of an unimaginable world yet somehow all about my mom. While reading it with uncomfortable fascination, I looked over and saw that my dad was scowling.

None of this made the slightest bit of sense until another half-century passed, and I stumbled across this file in the family archives. Ahhh, well of course. It was seven years before she and my dad met, but you know how these things linger…

It sure would be fun to go back in time and ask questions. Between this story and the playful flirtation in my father’s home movies, I am reminded that these gray ancestors had lives just like us modern folk, filled with lusts, fantasies, jealousies, and entanglements.