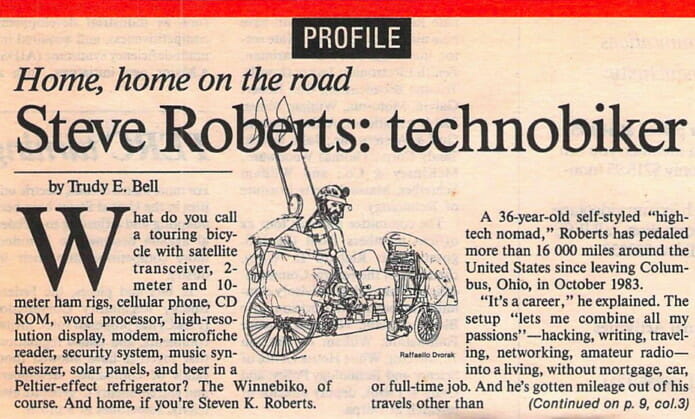 This piece in the news supplement to the IEEE Spectrum (Institute of Electrical and Electronics Engineers) came at the beginning of the long Silicon Valley BEHEMOTH-building layover. Such publicity helped immensely during the team-building phase… without my übergeek volunteers, that final version of the bike would never have reached escape velocity. A Japanese translation of this piece appeared a few months later.

Home, home on the road

“It’s a career,” he explained. The setup “lets me combine all my passions”—hacking, writing, traveling, networking, amateur radio— into a living, without mortgage, car, or full-time job. And he’s gotten mileage out of his travels other than on the road, having developed a flair for self-promotion.

For a year he has been writing a monthly column about his adventures for the ham radio magazine 73, and he has also published a book, Computing Across America [ordering address redacted]. 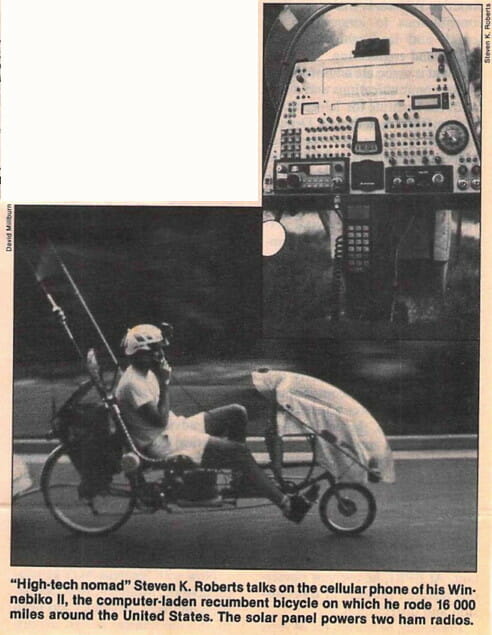 The bike itself is 8 feet (1.4 meters) long and a recumbent—a type in which the rider sits in a chair-like seat with legs stretched forward to pedals in front, and arms hanging down to handlebars beneath the seat. According to Roberts, the recumbent is more comfortable than an ordinary bike, because the seat’s back support gives a rider more leg power, and the design lowers the rider’s center of gravity and minimizes wind resistance.

The bike, which also pulls a 4-foot trailer, has a 21-speed automatic transmission under computer control. It is stopped by hydraulic rim and disk brakes, for, he observed, “there’s nothing like pedaling a 275-pound [125-kilogram] bicycle over a mountain to give you a profound new respect for gravity.”

Most of the weight is in the electronic gear that keeps Roberts in touch with a global ham community and his “lifestyle maintenance manager” (i.e., girlfriend), Maggie Victor, who now pedals a similarly rigged recumbent alongside.

All the communication gear— ham radio, cellular phone, and a three-channel radio-frequency link to his backpack—rides behind Roberts’ seat. The 2-meter rig is the “main social ticket” to chats with Victor and the hams in the vicinity (who often offer them a place to sleep). If Roberts (call sign N4RVE) and Victor (KA8ZYW) stop to camp, they can “throw dipoles into the trees” to expand their conversations overseas.

They also can rig up a Yaesu satellite transceiver to talk anywhere in the world via the amateur radio Oscar 13 satellite. (They cannot use the satellite rig while riding, because movement would prevent Roberts from keeping the crossed Yagi antennas aimed at the satellite.) 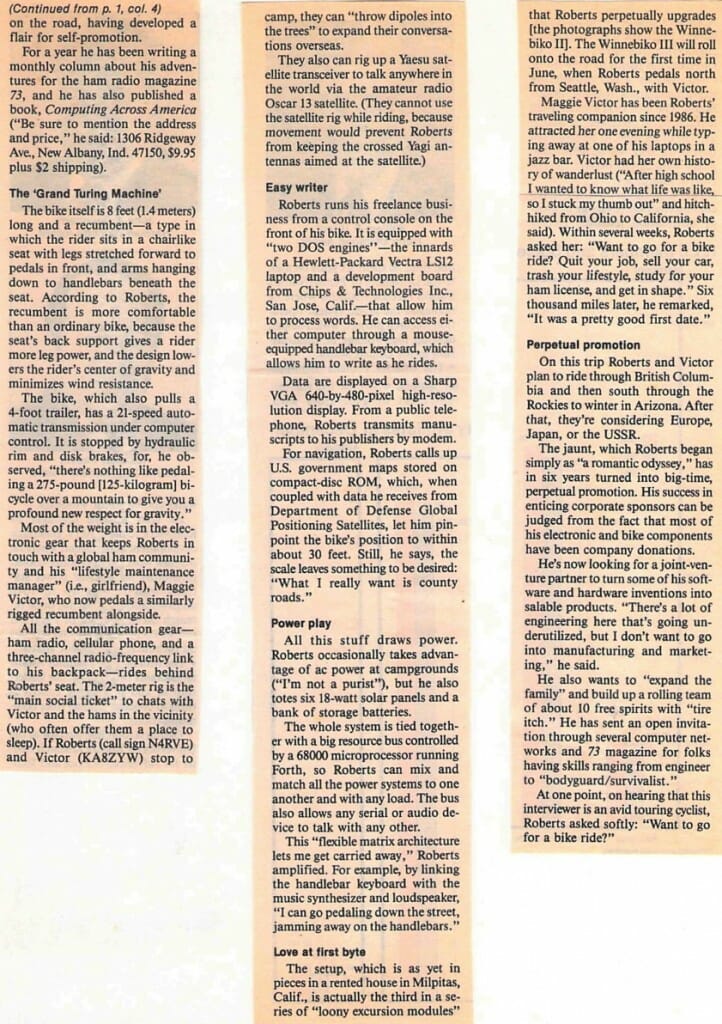 Roberts runs his freelance business from a control console on the front of his bike. It is equipped with “two DOS engines”—the innards of a Hewlett-Packard Vectra LS12 laptop and a development board from Chips & Technologies Inc., San Jose, Calif.—that allow him to process words. He can access either computer through a mouse-equipped handlebar keyboard, which allows him to write as he rides.

Data are displayed on a Sharp VGA 640-by-480-pixel high-resolution display. From a public telephone, Roberts transmits manuscripts to his publishers by modem.

For navigation, Roberts calls up U.S. government maps stored on compact-disc ROM, which, when coupled with data he receives from Department of Defense Global Positioning Satellites, let him pinpoint the bike’s position to within about 30 feet. Still, he says, the scale leaves something to be desired: “What I really want is county roads.”

All this stuff draws power. Roberts occasionally takes advantage of ac power at campgrounds (“I’m not a purist”), but he also totes six 18-watt solar panels and a bank of storage batteries.

The whole system is tied together with a big resource bus controlled by a 68000 microprocessor running FORTH, so Roberts can mix and match all the power systems to one another and with any load. The bus also allows any serial or audio device to talk with any other.

This “flexible matrix architecture lets me get carried away,” Roberts amplified. For example, by linking the handlebar keyboard with the music synthesizer and loudspeaker, “I can go pedaling down the street, jamming away on the handlebars.”

The setup, which is as yet in pieces in a rented house in Milpitas, Calif., is actually the third in a series of “loony excursion modules” that Roberts perpetually upgrades [the photographs show the Winnebiko II]. The Winnebiko III will roll onto the road for the first time in June, when Roberts pedals north from Seattle, Wash., with Victor.

Maggie Victor has been Roberts’ traveling companion since 1986. He attracted her one evening while typing away at one of his laptops in a jazz bar. Victor had her own history of wanderlust (“After high school I wanted to know what life was like, so I stuck my thumb out” and hitchhiked from Ohio to California, she said). Within several weeks, Roberts asked her: “Want to go for a bike ride? Quit your job, sell your car, trash your lifestyle, study for your ham license, and get in shape.” Six thousand miles later, he remarked, “It was a pretty good first date.”

On this trip Roberts and Victor plan to ride through British Columbia and then south through the Rockies to winter in Arizona. After that, they’re considering Europe, Japan, or the USSR.

The jaunt, which Roberts began simply as “a romantic odyssey,” has in six years turned into big-time, perpetual promotion. His success in enticing corporate sponsors can be judged from the fact that most of his electronic and bike components have been company donations.

He’s now looking for a joint-venture partner to turn some of his software and hardware inventions into salable products. “There’s a lot of engineering here that’s going underutilized, but I don’t want to go into manufacturing and marketing,” he said.

He also wants to “expand the family” and build up a rolling team of about 10 free spirits with “tire itch.” He has sent an open invitation through several computer networks and 73 magazine for folks having skills ranging from engineer to “bodyguard/survivalist.”

At one point, on hearing that this interviewer is an avid touring cyclist, Roberts asked softly: “Want to go for a bike ride?”