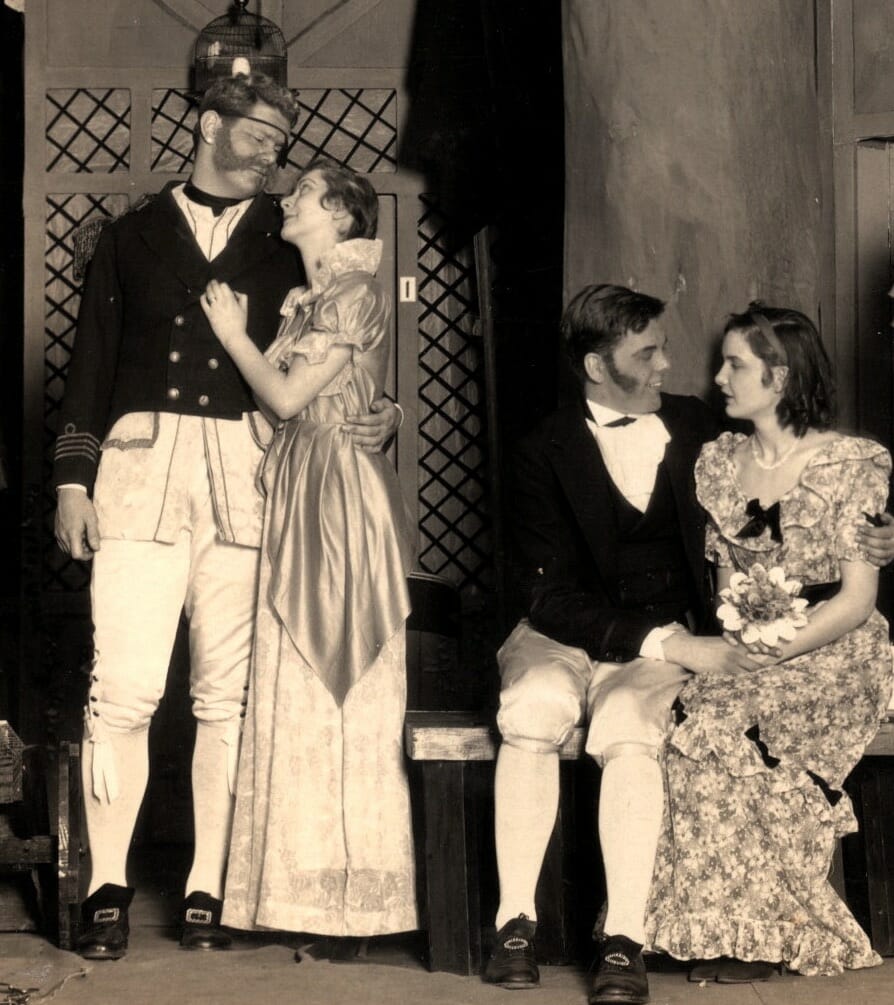 The gorgeous photo below is from Swarthmore High School… and I was fortunate enough to find the program as well in my father’s old papers (he was one of the stage managers). The photographer was Lewis Studios, and the 7×16-inch photo is remarkably well-preserved. I have scanned it and placed it in this archive to aid future historians, as I have been unable to find any other images of the event online. If you have more information to add about the play or can help identify the people, please contact me via the link in the menu.

I also have the 1931 Garnet Record, with a smaller version of the above photo along with the cast. Page 57 is the written account of the play:

Early in September the Senior Play Selection Committee began reading plays. They continued this until December when Pomander Walk was chosen. Tryouts were held and finally the play was cast.

The play was a great success, partly due to Fred Yocum, who was Business Manager and to Bob Cuthill, who was General Manager. Denny Jones and Arch Currie took care of the lighting. Elizabeth Channell designed the stage set and Charles Hearne and Ed Roberts were Stage Managers. The Costume Committee was headed by Edna Snyder while Ann Orr and Eleanor Wermouth designed the costumes. Ellen Pearson and Trimble Kent were Property Managers, Erwyn Kahler was Head Usher, and Betty Bonsall was head of the Art Committee. The entire class worked very hard and each member did something toward the success of the play.

Pomander Walk was a little settlement in England “out Chiswick Way.” There were five houses and the “Gazebo.” Mlle. Marjolaine Lachesnais (Lydia Ballard), lives in one of them. After much difficulty the Hon. John Sayle (Schuyler Simmons) wins her love and finally marries her. His father, the tenth Baron Otford (Samuel Butler), had in his youth, been in love with Marjolaine’s mother, Madame Lucie Lachesnais (Lucy Black). Pamela Poskett (Eleanor Whitmore) is a widow whose sole interest, outside of her design upon Sir Peter Antrobus (Bob Detweiler), lies in her cat, Sempronius. Brooke-Hoskyn (Walt Wernher) was the “social lion” of the settlement. The Rev. Jacob Sternroyd (Sam Wisdom) had a great time getting marriage licenses for everyone. Even Mr. Pringle (Harry Hartman) and Barbara Pennymint (Harriet Matter) fell in love. Jim (Bill Swann), Ruth Pennymint (Kay Wood), the Hon. Caroline Thring (Ann Orr), and the maids (Edith Bradfield and Ruth Brill) are the only ones who did not get married. Of course the Eyesore (Bill Kurtzhalz) didn’t, but he was the “clown of the show.” He kept the audience in hysterics all the time.

Most credit is due to Miss Kirk, who ably coached the play, but the class also wishes to thank all the others who helped to make the play a success.

Now that the scan is online, I don’t really need to continue to be responsible for the original. I am trying to find homes for family archives and other items for which I have become the unwitting curator… better that than have it all carted off to a thrift store when I cease to exist! More details here.