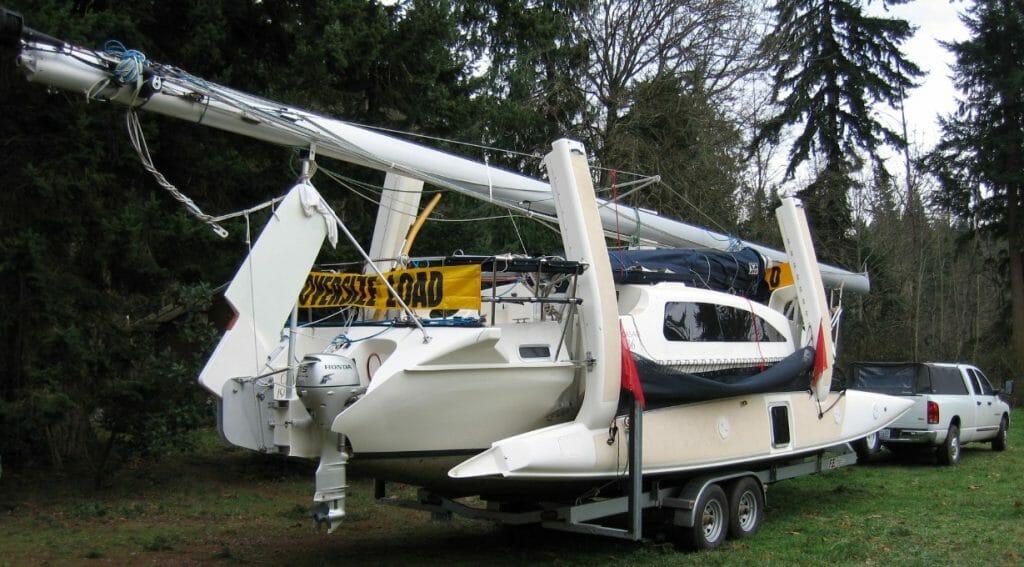 A huge transition has just occurred… Nomadness is now perched on her new FE trailer in my front yard, quite dwarfing NEWT, the truck that hauled her all the way from the harbor in Blaine. The mast is the same length as my house.

The next step is to find someone to do a bit of site prep in the woods next to the Microship lab, lay down some gravel, move the boat, then construct a carefully specified “non-building” to provide shelter during the next few months of projects. My plan at the moment is to design a couple of 16-foot-tall pyramids of some suitably stiff material, use them to raise the mast, then treat that as a ridge pole for a huge tarp that will then be draped over the boat and tied down securely enough to withstand the occasional windstorms. I’ve spent months researching “buildings” of various flavors, finding that the cost for something free-standing and code-compliant ranges from $3,000 to $15,000. I think I can keep the rain and corrosive tree-pee off for a few months with a budget that’s about 20% of the low-end figure, using the boat and trailer as the core structure of a temporary shelter.

The haulout was an adventure. With the able assistance (OK, direction) of Mark Gumley and Wayne Erickson, I spent the only sunny day of the past few weeks converting the ship from floating to rolling mode. The sails came down, along with the dodger structure, then we motored over to Westman shipyard for the epic mast-lowering. This was frustrating, as one of the key advertised features of this boat was the ability to raise and lower the mast with a winch and gin-pole… but Corsair evidently got lawsuit-shy with this 50-foot, 350-pound hunk of aluminum and started leaving out the requisite hardware around the time mine was built (2004). As such, I’m much less likely to get crushed, but have to spend $100 for crane service every time I launch and retrieve… an annoying trade-off that has me noodling over self-sufficient alternatives.

It was a bit of a dance, balancing my delicate boatlet between the nasty creosote-oozing pilings of an industrial shipyard a-buzz with welding and testosterone, sending Mark up the mast on an improvised bosun’s chair to position sling and downhaul, then carefully maneuvering the flying rig into a bolted-on stern crutch… poised to leap overboard at the first indication of system failure. But it worked, and the mast was slowly lowered into a state of transport-readiness.

That done, we motored to the ramp, where the first order of business was to fold the crossbeams to reduce beam from 24 feet to just under 10. This turned out to be much harder than it is on an F-27, but the always-resourceful Marcus jumped into his inflatable with 50-horse outboard at the stern and Joey-the-dog grinning on the foredeck, nosed grimy rubber against the port ama, and gunned the throttle. Dang, it worked… and after the fourth attempt we were prepared to pin it in place at the critical moment. The starboard side was easier: Wayne, a longshoreman in his other life, rigged a clever but less dramatic hack with winch and block.

It was now fully dark and getting cold. Using Wayne’s Dodge RAM instead of mine (he has the 4-wheel drive version), we submerged the new trailer and winched the boat aboard. With a roar and a few spinning wheels, Nomadness made the startling transition from graceful boat to massive payload, streaming salt water, gleaming in the streetlight, looking ungainly as hell. We swarmed over her, tying things down, rigging flags and OVERSIZE LOAD mini-spinnakers, readying her for the abrupt burst of speed after 3 months in the harbor where she had been hammered by windstorms and weighed down by 16 inches of snow… all but forgotten after the exquisite maiden voyage in August (was it ever warm?). Here, Mark is clambering out on the mast to secure the furler:

And then… I transferred the trailer to my truck, tested the lights, and seriously contemplated getting a motel and making this insane run in the light of day.

But the energy was high and the boat impatient, straining at her tie-downs as if poised to slip her mooring lines and fly with the beckoning winds. What the hell. I rumbled into the night and on to I-5, Wayne following with occasional cell-phone check-ins, getting to know the dynamics and occasional sickly oscillation that comes from not using a proper anti-sway hitch. Actually, I used my Equal-i-zer… inverted to level the trailer… but since the new rig has hydraulic surge brakes I could not attach the bars given the setup that came with the trailer (although the Equal-i-zer hitch does work with surge brakes in general). My diesel burn rate dropped from an average of 21.5 to about 12 and even the semis blew past me in the night, but I soon adapted to the 4-ton load, gave Wayne the OK to speed on home, and continued on a broad reach to Camano Island.

The messiest part, as always, was the last quarter mile. I stopped at my mailbox and unknowingly spilled my cell phone onto the road… then promptly ran over it with the trailer. Apparently the wimpy Motorola V710 is not built to withstand a couple of tons; I’m going to have to choose a more robust model next time. There were some dicey moments sneaking around the curve between the big Douglas Fir and a massive wall of paint-scratching blackberries, and my idealized image of gliding across the yard through the gaposis where I gave away two apple trees was dashed by muddy reality, but eventually I got her parked in a temporary slip by the shed… awaiting proper moorage. This has been a long haul, and it wasn’t easy to give up short-notice launch readiness in exchange for the practicality of having her by the lab, but it’s done, and the geeky bits are about to begin.