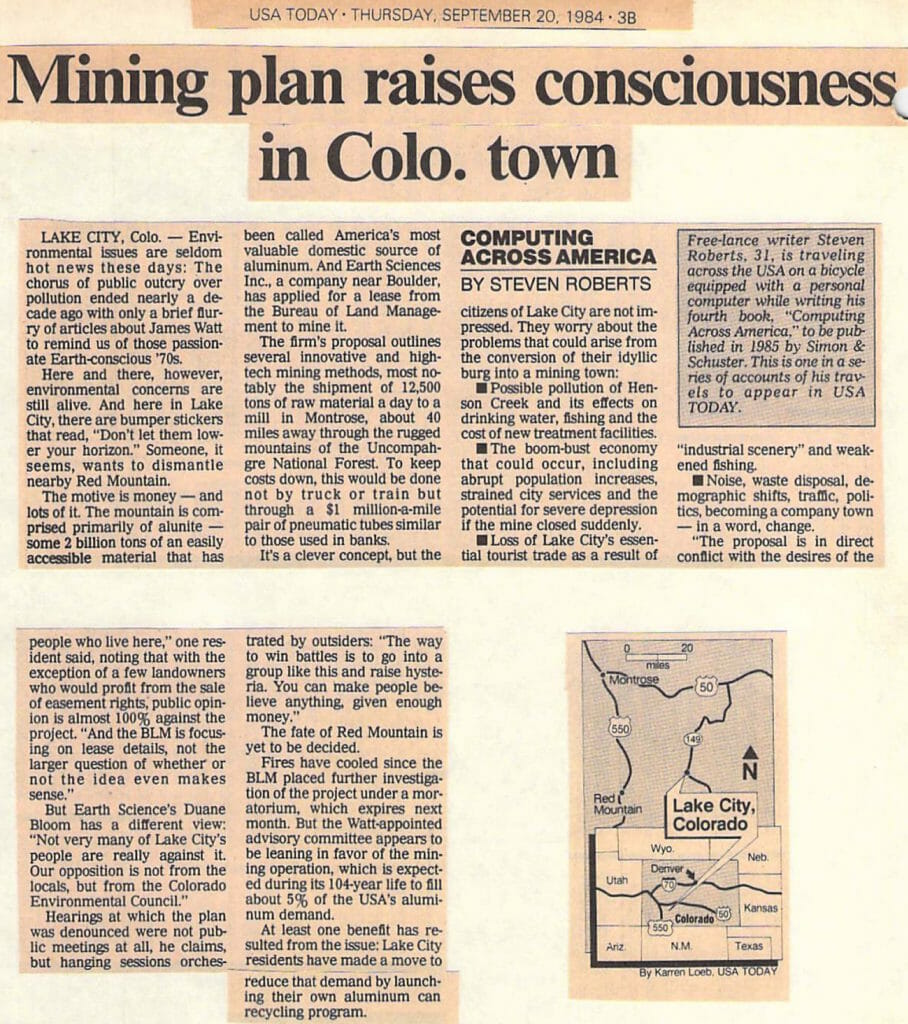 This was a bit of a departure from my usual material for the “Computing Across America” column in USA Today, but it was a hot-button issue while I was staying with a Lake City friend on my bicycle trip.

Lake City, Colo. — Environmental issues are seldom hot news these days: The chorus of public outcry over pollution ended nearly a decade ago with only a brief flurry of articles about James Watt to remind us of those passionate Earth-conscious 70s.

Here and there, however, environmental concerns are still alive. And here in Lake City, there are bumper stickers that read, “Don’t let them lower your horizon.” Someone, it seems, wants to dismantle nearby Red Mountain.

The motive is money — and lots of it. The mountain is comprised primarily of alunite — some 2 billion tons of an easily accessible material that has been called America’s most valuable domestic source of aluminum. And Earth Sciences Inc., a company near Boulder, has applied for a lease from the Bureau of Land Management to mine it.

The firm’s proposal outlines several innovative and high-tech mining methods, most notably the shipment of 12,500 tons of raw material a day to a mill in Montrose, about 40 miles away through the rugged mountains of the Uncompahgre National Forest. To keep costs down, this would be done not by truck or train but through a $1 mllion-a-mile pair of pneumatic tubes similar to those used in banks.

It’s a clever concept, but the citizens of Lake City are not impressed. They worry about the problems that could arise from the conversion of their idyllic burg into a mining town:

“The proposal is in direct conflict with the desires of the people who live here,” one resident said, noting that with the exception of a few landowners who would profit from the sale of easement rights, public opinion is almost 100% against the project. “And the BLM is focusing on lease details, not the larger question of whether or not the idea even makes sense.”

But Earth Science’s Duane Bloom has a different view: “Not very many of Lake City’s people are really against it. Our opposition is not from the locals, but from the Colorado Environmental Council.”

Hearings at which the plan was denounced were not public meetings at all, he claims, but hanging sessions orchestrated by outsiders: “The way to win battles is to go into a group like this and raise hysteria. You can make people believe anything, given enough money.”

The fate of Red Mountain is yet to be decided.

Fires have cooled since the BLM placed further investigation of the project under a moratorium, which expires next month. But the Watt-appointed advisory committee appears to be leaning in favor of the mining operation, which is expected during its 104-year life to fill about 5% of the USA’s aluminum demand.

At least one benefit has resulted from the issue: Lake City residents have made a move to reduce that demand by launching their own aluminum can recycling program.