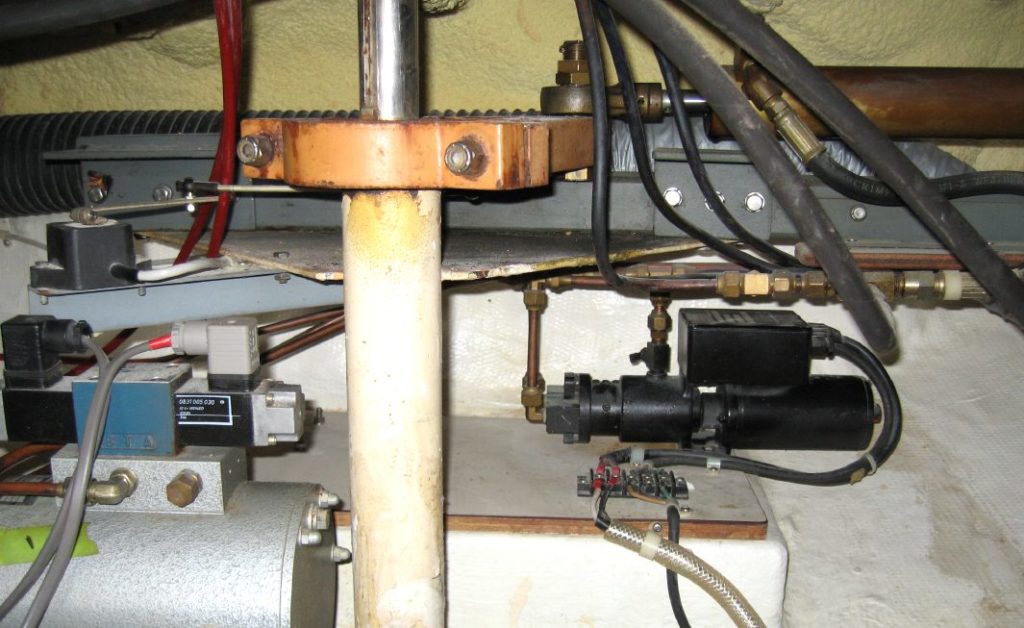 There is something refreshing about a deadline that looms with implacable insistence. Instead of the casual plasticity of self-imposed schedules, there arises an urgency tied to the plane tickets of house sitters and the contractual inflexibility of marina move-out dates.

Given all that, we have recently noticed an increase in the completion percentage of the lists (clearly defined tasks, purchases, project management documents, general to-do, and so on). It is difficult to detect whether this is attributable to an actual increase in productivity or is just a growing reluctance to add new tasks, but really… who cares? The important thing now is more evenings like the one the other night with friends on Baccara and My Decade, as well as maximizing Time On Water even if the adventures are thinly disguised as autopilot commissioning, salinity-vs-power tests on the Sanitation Device from Hell, or a succession of pragmatic missions (Brion blessing the Hood in-mast furler, Andrew installing the Little Cod woodstove, prostrating ourselves before marine plumbers in the vain hope we might petition for a moment of their time, or even, dare I say it, learning the boat and just plain sailing).

What this translates into, from a bloggish perspective, is a backlog of news.

One of the big jobs that I’ve known about since before buying the boat is autopilot replacement… the clunky old Robertson not only suffers from a mysterious internal confusion regarding compass heading but was also associated with an industrial-scale continuously running hydraulic pumpset that would drive us mad while killing the batteries. “Replace autopilot” was thus one of the first items on the to-do list, a classic illustration of the inverse relationship between the number of words required to express a task and the number of hours required to complete it (the Roberts Law of Creeping To-Do List Complexity).

Given the monstrous 30 cubic inch Wagner N50-300 hydraulic cylinder that drives the rudder and the desire to have the new contraption play nice with N2K lingua franca, it didn’t take long to winnow down the available choices. I selected the Simrad AP24.

There are a lot of pieces to an autopilot system. A computer is at the heart, of course, with a separate display head providing a user interface. It needs to know the ship’s compass heading, rudder position feedback, and course data if proceeding to a waypoint rather than just maintaining a fixed direction. A remote control is essential, making it possible to drive the boat without being tied to the helm, and the “business end” is a motorized unit that powers the rudder back and forth without fighting other steering inputs (in my case, the wheel). And, given a navigation network that makes every data source available, a clever autopilot can also incorporate wind data to replicate classic wind-vane steering (great for the trades) or depth countour tracking along bathymetric features. It will even auto-tack and fine-tune itself to the apparent wind, adjust its servo gain to sea state, and so on.

What this all translates into on Nomadness is a lot of mounting and connecting, which of course immediately introduces interesting challenges (since nothing, on a boat, is ever quite as simple as it seems). The old pumpset used heavy copper hydraulic tubing instead of the more modern flexible stuff, I was unwilling to start cutting holes in the lower helm for the control head while the availability of Furuno’s long-promised NavNet 3D chartplotters is still a matter of considerable speculation, running long heavy power cables through the innards of a boat is hard, and pieces of the old pilot had to get out of the way.

Since I wasn’t quite willing to rip out the Robertson and leave a gaping hole to be filled someday by the back-ordered MFD8, I kluged a couple of felt-covered wood panels above the existing lower helm… and there installed the sexy Maretron DSM250 instrument display, an old GPS, the autopilot head, Kestrel 4000 weather instrument, Icom M72 handheld VHF, Zoom H2 audio recorder, and timer (with the little stuff all on velcro for quick removal). This is how it begins.

Terry from Anacortes Marine Electronics came over and did the hard hydraulic stuff, then once all the cables were run it was time to start testing. Basically, it came up pretty well, though we haven’t had a sea trial yet and the rate gyro compass still needs to be swung (calibrated to the boat’s considerable magnetic field). The Simrad user interface is a little ungraceful in places and it switches to Spanish if you hit the MENU key during rudder calibration, but still… I think it’s going to be very cool. One of the best parts is the WR20 remote, which is a hand-held device (with neck strap) that talks to a networked base unit via Bluetooth and allows full control over ship steering (as well as some clunky ability to view data pages from other systems). I can walk around the marina with this and still steer Nomadness and observe her coordinates… which is kind of a strange thought. I always did love remote-control toys.

As you may know from recent posts, one of the more annoying issues has been the plumbing… we really want to be free to wander around without having to tiptoe when it comes to discharge. The pieces are all in place and appear to be very well done, but the LectraSan – a gadget that seems to inspire love-hate relationships with voyagers – is not cooperating.

The symptom is a green-yellow blinky pattern that is reported to be due to inadequate current through the cabling, low battery, failing plates, or insufficient salinity. Since the plates seemed to be the only plausible cause, I gave it the muriatic acid treatment and was rewarded with a red LED and immediate shutdown, which means blown fuse or intermittent. More fiddling whilst lying in awkward positions, and then it was back to yellow-green. Raritan was not too helpful, reassuring me that “the unit is in the extended cycle and is treating properly” even though their manual says not to use it when this happens since it eats plates, and then, when pressed, advising me to pull out the poop-encrusted contraption and ship it to Florida or New Jersey. While that is quite an interesting toss-up, I am more tempted to use it as an artificial reef.

But a friend at the marina pointed out that the salinity of the mighty Swinomish should not be taken for granted, and that his LectraSan, in fact, is now including the identical failure mode in its repertoire of misbehaviors. A bit of research turned up the fact that the salinity in the open ocean is 35 PSU (Practical Salinity Units), or 35,000 parts per million of salt… while the Swinomish Channel, running back and forth between two shallow bays with much river outflow, ranges from 20-27 PSU at the north end down to 0-15 PSU south of La Conner, depending on phase of the moon and Skagit River discharge. The temporal salinity gradient might thus be keeping LectraSan current flow depressed (about 29 amps last night), triggering the error condition… so now we have yet another reason to flee this place of annoying cross currents and recently booted live-aboards for the timeless allure of open water.

Nobody ever said this was going to be simple!

I was going to wrap this up with a rhapsody on gizmology, one of the driving forces behind my chronic technomadness, but it’s time instead to go do some. And besides, the geeky bits sometimes seem to pale in the presence of the more pressing issues… having the magic carpet complete enough to spirit us away on a moment’s notice. I just got the ship’s FCC licenses (SSB and MMSI, plus Radiotelephone), the hard mattress in the aft stateroom now has a latex layer, and the pile of boxed products is now noticeably reduced as their contents have become integrated into the ship.

Oh, and a quick footnote, speaking of geekery: I’ve been unable to get automatic RSS working here, since apparently Blogger only does it for Blogspot-hosted sites. I’m unwilling to manually edit XML each time, so I munged the Feedburner files (I think) to just point to the front page. If you know how to fix that so the RSS/Atom/whatever happens automatically, please let me know.

Cheers from the not-so-salty sea,
Steve