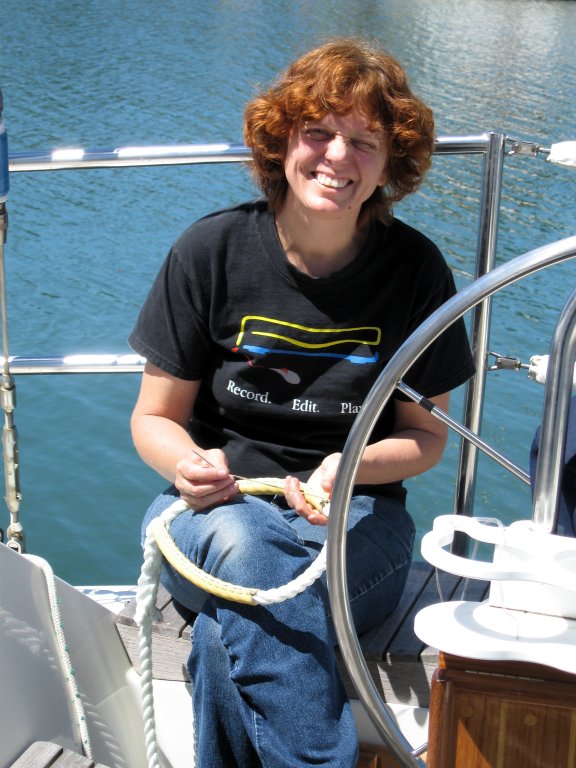 “Just a minute,” I told Captain Jerry, when he popped by the boat to announce that the pile of Dungeness Crab was ready over on Baccara. “Sky is sewing chafing gear and I’m chasing cables.”

“Those are forever jobs,” he replied with a twinkle. “The crab is ready now!”

Yah, it’s high season… and our friends had just hoisted a hefty trapful in a brief sailing foray out of this weird quasi-brackish backwater. It’s time: I have a yet-untested crab ring, a shellfish license, a boat, I-68 for re-entry from Canada, and even a winsome and willing first mate:

But jeez, these last few days before departure are insane. We’re sleeping on the boat now, and the homestead is in the capable hands of a new friend who emerged from the vapours of the Net after a long correspondence with Sky. Cooking aboard is less mysterious, the tools are getting stowed, and it is now much less startling for me to find all the parts needed for a project right here in the nomadic lab. But still… the frenetic sense of a million little jobs is seeming increasingly incongruous whilst bobbing gently in the wakes of passing stinkpotters.

Some is fun, of course, like watching things flicker to life (and getting a clean bill of CANbus health from the borrowed Maretron N2K Meter). Nothing like a cluster of LCDs at sunset to gladden the heart of an old geek…

I’ve also been severing umbilici, both real and symbolic. One of the real ones was the anachronistic wall-wart running the Top Global 6800 EVDO router (though I would now much rather have the Cradlepoint CTR500). Being tied to AC to run a device whose entire purpose is to route local WiFi to a wireless Internet connection is a little weird. So I fixed it:

But that was easy. The reverse engineering jobs are more challenging… like slurping diesel tank levels onto the N2K bus. This shouldn’t be hard, in theory; the input side is an ancient technology that basically incorporates the resistance of a “sending unit” into a voltage divider and displays the result on a meter; the output side is a magic little black box with analog on one end and NMEA 2000 on the other. But like many things on this boat, the reality is arcane and confusing. The resistances of the three tanks look more or less reasonable, and once I fixed a wiring error in the gauge that precluded simultaneous backlight and fuel-level sensing, it even showed a more or less plausible reading which, although reassuring, didn’t correlate with the actual level observed by removing the inspection plate on the starboard tank:

(I am not at all happy with the color of the fuel, the severe gunk revealed in some of the photos, or the discovery that the tank isn’t as full as I thought… increasing the probability that over the winter I have been inhaling air through the vent and condensing it into an invisible zone of water with a corresponding biocline that is home to filter-clogging bugs. Also, the prospect of a 150-gallon fillup at bend-over prices is not at all appealing.)

Anyway, this is one of those things that starts as a simple to-do list item and burgeons into multiple notebook pages, research into tank cleaning, exploration of sensor alternatives, and whimpering as Nigel Calder warns about the perils of exactly what I see here. But hell, maybe I can get away with quickly burning off the ancient stuff, doing a fill-up while calibrating the existing sensors, and relegating this to the ever-more-burdened back burner. Yah, right. Nothing is ever that easy on a boat.

A very familiar phenomenon in projects of this scale is yak shaving – “any seemingly pointless activity which is actually necessary to solve a problem which solves a problem which, several levels of recursion later, solves the real problem you’re working on” (credited to the MIT AI lab and widely Googlable for examples). Usually this translates into rising frustration as you range further and further from the original task, chasing parts to build a fixture for the temporary tool needed to test the bifurcated widgetframus that you will use to increase the refrangible densiosity of the thing you are actually trying to DO, damn it. But sometimes you get lucky, and the yak shaving accidentally knocks other items off the list… like yesterday, when I was trying to uncover a fuel tank and ended up extracting the ancient dinosaur of a watermaker that has been very much in the way on a lot of levels. The boat’s roll angle changed by at least a degree when I wrestled the pumpset onto the dock, and I now have room for the svelte Katadyn 40E that has been patiently outliving its pickling since I bought it last year.

Throughout all this, my faithful cat, Java, has been watching grumpily as more and more familiar items (including me) disappear from her home of 10 years… and even though she covered about 25,000 miles around the US as a catlet way back in the heyday of the speaking biz, she’s been growing moss between her furry toes in the woods of Camano. The other day I decided to shake her up a bit, so I hauled her off to the boat without warning…

She had never really seen this much water, and seems as enchanted as I am with the play of light… though I suspect she may have self-preservation in mind more than adventure. She also has a fondness for Dungeness crab.

Well, a frenetic time makes for a scattered posting, but the myriad snippets fade into a homogenous blur if not immortalized in snapshots of pixels and words. Tuesday a diver will attempt to conquer the thicket of biology that threatens to take root and render Nomadness anything but, and trips to the lab are now starting to feel more like “visits” than “going home.” By this time next week, we’ll be properly afloat.