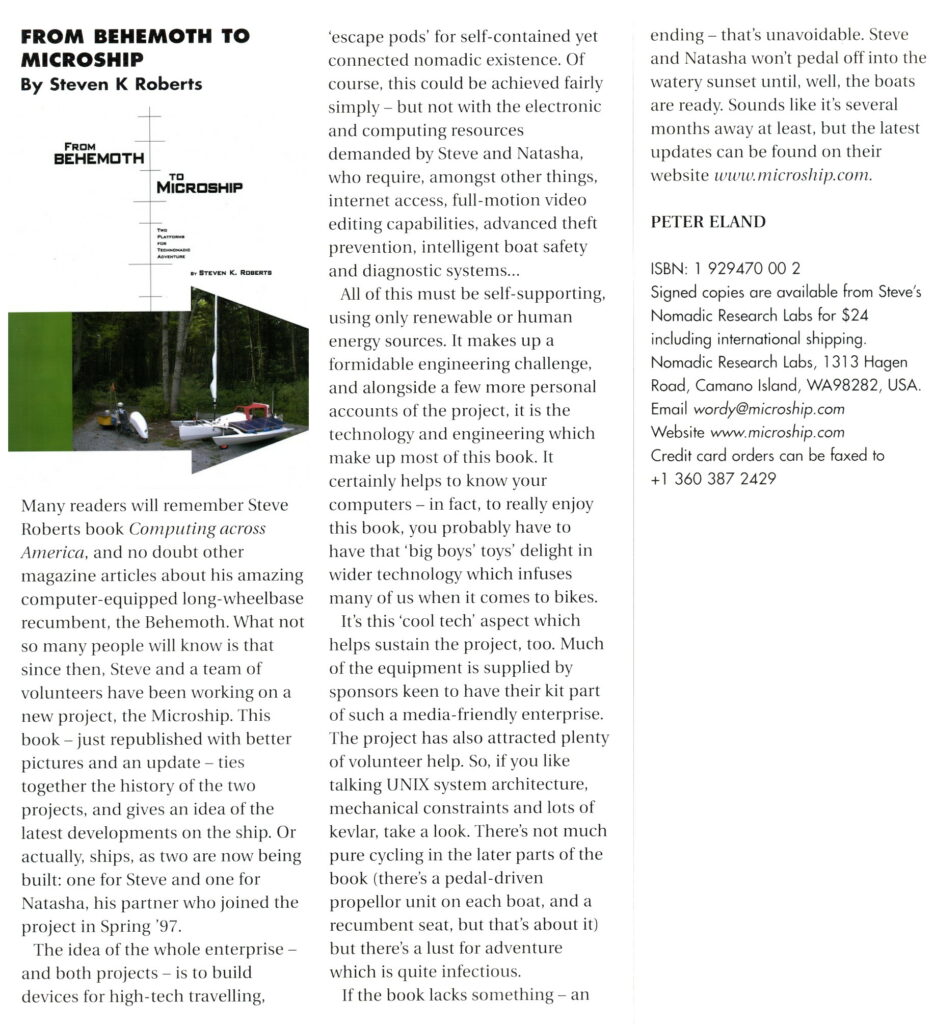 Many readers will remember Steve Roberts book Computing Across America, and no doubt other magazine articles about his amazing computer-equipped long-wheelbase recumbent, the Behemoth. What not so many people will know is that since then, Steve and a team of volunteers have been working on a new project, the Microship. This book — just republished with better pictures and an update — ties together the history of the two projects, and gives an idea of the latest developments on the ship. (or actually ships, as two are now being built: one for Steve and one for Natasha, his partner who joined the project in Spring ’97.

The idea of the whole enterprise — and both projects — is to build devices for high-tech travelling, ‘escape pods’ for self-contained yet connected nomadic existence. Of course this could be achieved fairly simply — but not with the electronic and computing resources demanded by Steve and Natasha, who require, amongst other things, Internet access, full-motion video editing capabilities, advanced theft prevention intelligent boat safety and diagnostic systems…

All of this must be self-supporting, using only renewable or human energy sources. It makes up a formidable engineering challenge, and alongside a few more personal accounts of the project, it is the technology and engineering which make up most of this book. It certainly helps to know your computers — in fact, to really enjoy tins book, you probably have to have that ‘big boys’ toys delight in wider technology which infuses many of us when it comes to bikes.

It’s this ‘cool tech’ aspect which helps sustain the project, too. Much of the equipment is supplied by sponsors keen to have their kit part of such a media-friendly enterprise. The project has also attracted plenty of volunteer help. So, if you like talking UNIX system architecture, mechanical constraints and lots of kevlar, lake a look. There’s not much pure cycling in the later parts of the book (there’s a pedal driven propellor unit on each boat, and a recumbent seat, but that’s about it), but there’s a lust for adventure which is quite infectious.

If the book lacks something — an ending — that’s unavoidable. Steve and Natasha won’t pedal off into the watery sunset until, well, the boats are ready. Sounds like it’s several months away, at least, but the latest updates can be found on their website www.microship.com.

<obsolete ordering info redacted, but there are a few copies in our online store>

There is something fun on the next page, by the way….