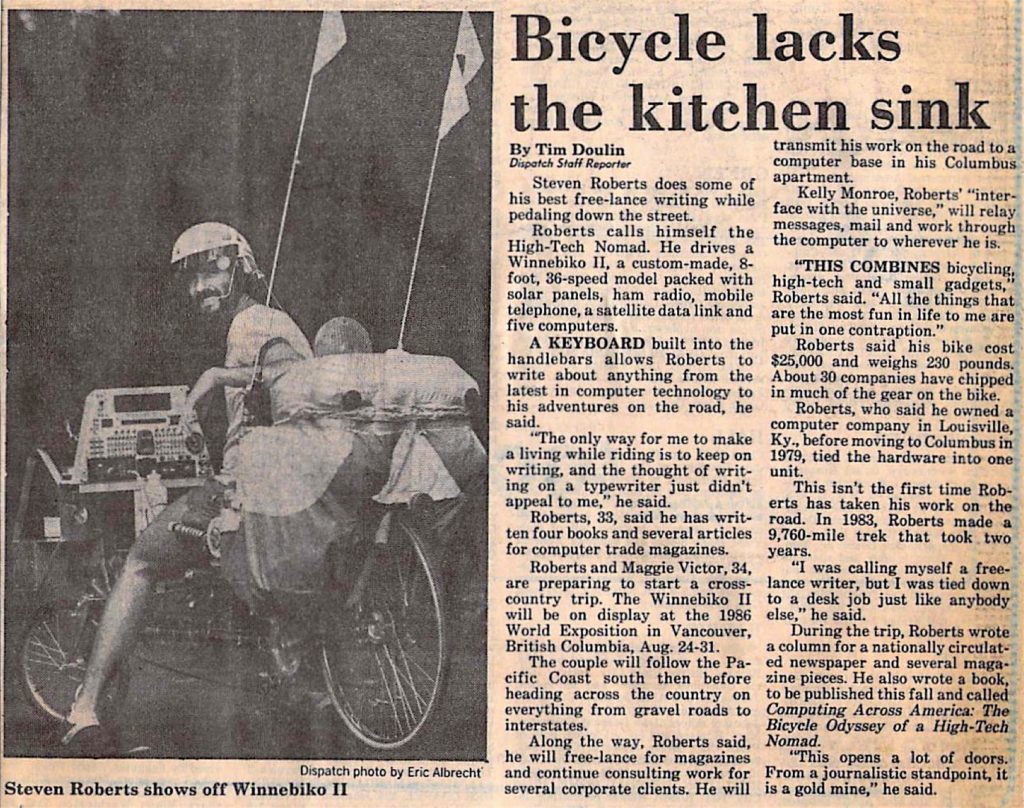 This article in my home-town paper appeared just before we drove the van to Vancouver to display the shiny new Winnebiko II at Expo ’86, and has the distinction of being one of the most amusing titles in the entire collection of media binders.

Steven Roberts does some of his best free-lance writing while pedaling down the street.

A keyboard built into the handlebars allows Roberts to write about anything from the latest in computer technology to his adventures on the road, he said.

“The only way for me to make a living while riding is to keep on writing, and the thought of writing on a typewriter just didn’t appeal to me,” he said.

Roberts and Maggie Victor, 34, are preparing to start a cross country trip. The Winnebiko II will be on display at the 1986 World Exposition in Vancouver, British Columbia, Aug. 24-31.

The couple will follow the Pacific Coast south then before heading across the country on everything from gravel roads to interstates.

Along the way, Roberts said, he will free-lance for magazines and continue consulting work for several corporate clients. He will transmit his work on the road to a computer base in his Columbus apartment.

Kelly Monroe, Roberts’ “interface with the universe,” will relay messages, mail and work through the computer to wherever he is.

“This combines bicycling, high-tech and small gadgets,” Roberts said. “All the things that are the most fun in life to me are put in one contraption.”

Roberts said his bike cost $25,000 and weighs 230 pounds. About 30 companies have chipped in much of the gear on the bike.

Roberts, who said he owned a computer company in Louisville, Ky., before moving to Columbus in 1979, tied the hardware into one unit.

This isn’t the first time Roberts has taken his work on the road. In 1983, Roberts made a 9,760-mile trek that took two years.

“I was calling myself a freelance writer, but I was tied down to a desk job just like anybody else,” he said.

During the trip, Roberts wrote a column for a nationally circulated newspaper and several magazine pieces. He also wrote a book, to be published this fall and called Computing Across America: The Bicycle Odyssey of a High-Tech Nomad.

“This opens a lot of doors. From a journalistic standpoint it is a gold mine,” he said.