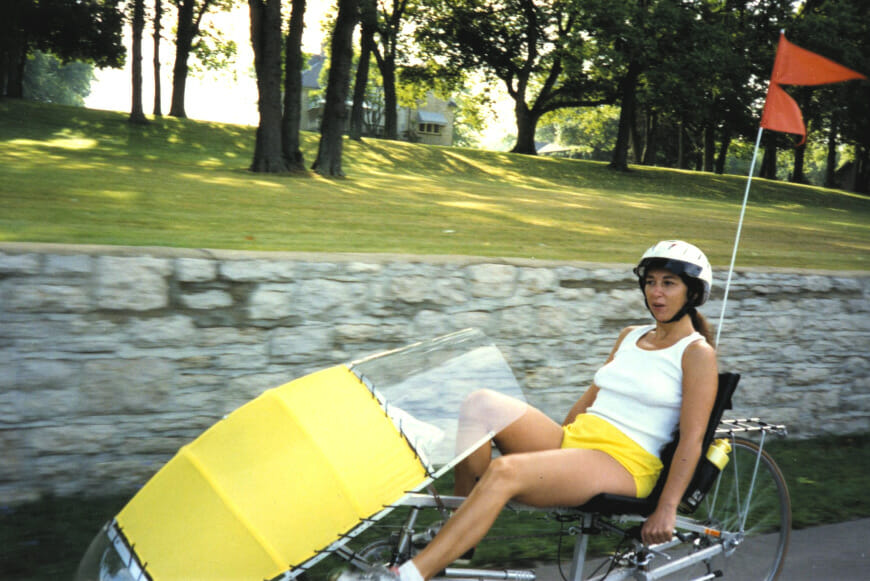 And so it begins. I am writing from a motel room in Colorado, Columbus far behind, the road suddenly a reality. Before I start telling stories, two bits of additional background are necessary.

First, the general plan. We’re driving a van to Vancouver (then a car to Carson City, of course, followed by a brisk walk to Waukegan and… oh, never mind). The Winnebiko will be on display at Expo ‘86 for a week, then we’ll spend a month, more or less, in Seattle — with the intent of finishing the wiring and software design. Then the road, at last, with the van sold or driven back to Ohio.

Second, the reason for the word “we” in the last paragraph.

During my first Great Escape, a major theme was love — to put it gently. “I have both freedom and security,” I was fond of saying, going on to rhapsodize about networks, travel, friends and the surprising new twists in romance that come from living in Dataspace.

But people have often suggested that the first word of  Computing Across America should be replaced with something else, and it has occasionally even occurred to me that the variety of on-the-road encounters might have had more to do with late-blooming adolescence than True Love. On one level, of course, it was Everyman’s dream-come-true; on another, it was a dangerous flirtation with a dizzying variety of pathogens with transient delight as the only reward.

My only true love was the Other Woman… that sweet piece of asphalt known as “The Road.”

It’s time for a new approach.

Maggie and I met six months ago, eyes sparkling across a smoky jazz bar, the awareness of Something Significant as tangible as the articulate guitar riffs filling the air between us. Flowing black hair, high cheekbones — pretty, poised, and smiling as if waiting for my arrival. We met with exuberance, celebrated the event with passion, and shared the kind of bliss generally associated with falling in love. Even the cat couldn’t stand being in the same room with the two of us, and yes, we even quoted Gibran.

Six months later, we’re still at it, falling in love over and over. Nice change, doing that with the same person. And yes, my sweet cyclemate is going with me on this adventure: she glides along on her own solar-equipped recumbent, long hair wafting in the breeze, tan legs pumping, a smile as wide as the highway lighting her face. Yes, she’s going with me, and as I tap the keys here in the ham-operated Frontier Motel she’s out there gatherin’ provisions for the road ahead.

OK. Now the background is complete. The stories begin at last.

Phew. This was a day, a major day, a day of mountains and impressions and exquisite desolation — a welcome change after yesterday’s 925-mile marathon drive from Columbia, Missouri to Boulder, Colorado.

Boulder Canyon: echoes of that time 16 years ago when I pedaled unprepared and silly into the beginning of alpine winter only to turn back within a week. Different now, a new eye, a new purpose. We clambered the rocks, gazed at nascent vastness, played hide and seek among the boulders. Boulder itself (the town) is now expensive, gentrified and trendy, still echoing its recent hippie heritage but too smooth somehow… we ate in the “last American Diner” under the sounds of 50’s music (Duke of Earl, Little Town Flirt) and pressed on, forgetting our resolve to park and explore.

Nederland (a shop called “Gopher Baroque”). Ward (“Thank you for stopping in-Ward,” I joked). Sweet silence and that unforgettable Colorado character that’s so easily forgotten in suburbia. Vastness, smiles with Maggie, and the refreshing brisk cold that chases torpor and clears the psychic pipes—the road a thousand miles of mental floss. Colorado, at last.

At Estes Park, preparing to head west into Rocky Mountain National Park, we saw the crowds — the bicycles, cleats, and Yakima racks. Cold, wearing inappropriate shorts, we pressed through the masses and found ourselves in the middle of the Coors Classic, a world-class bicycle race with the likes of Greg Lemond, sponsor logos and support teams everywhere. Sounds of French, Italian, Aussie, German. Crowds concentrated at the starting line — and at every curve, breathless for action. We found a place to stand above the crowd-heads and watched the start of the 55 mile circuit; minutes later a tight line of powerful human-machines blasted by at nearly 30 mph, raising goose bumps with their intensity, honking wildly up the home-stretch grade in what, to them, must have seemed a continuous roar of claps and cheers. But then the rain began, slicking the track, breaking one head, and slowing the pace. We stocked up on exotic chocolates and pressed further into the mountains, climbing, climbing, until even the trees gave up the effort and all around us was only cloud and rock.

Rocky Mountain National Park is a spectacle of unimaginable magnificence, Trail Ridge Road rising into the clouds to 12,183 feet — above tree line, into the tundra. We stopped frequently. On one giant slope, far enough from the road for quiet to rule at last, I stood alone on a rock outcropping and savored the sensation of massive wind-driven fluidity. Maggie watched me for a moment, and then bubbled into a sudden exultation of irrepressible childlike exuberance, closing the space between us in an open-armed dash and appearing warm in my arms. Light rain ticking ripstop. Hair beaded with droplets. Warm, warm human holding me in a place primordial, vast, humbling. A kiss.

The love of this moment pervaded the day, each stop another discovery, another step further from the habit of suburban mediocrity. Visibility a van-length; occasional lines of headlights appearing bright on white and passing into our past, sometimes a sign, sometimes a solar-powered bathroom that flushes with oil. We stopped at that one, confirmed the relative specific gravities of oil and water, and walked into the tundra — trail-bound, hushed in blowing cloud, somewhere in the skies of America. Tiny flowers, tiny beasts; an ecosystem fragile, a place bizarre. Closer we grew.

Down the mountain, over the divide, west at last. The sky show of evening kept our faces to the windshield, gaping out and up at a confluence of mountains, lake, and sky that evolved from moment to moment like a concerto — bound by theme, constrained by style and key, yet free to roam through variations infinite until all scores are settled and the tonic nigh. Sunset itself was anticlimactic: we turned the volume down and devoted ourselves to finding a home for the night. And it was thus we came to be in Granby.

“KA8OVA,” I told the man behind the counter, “and that’s KA8ZYW out there in the van.”

So began the stay at the Frontier Motel, presided over with humor and delight by Pat and Rich Agnew. They promised to let us take a late Jacuzzi and sent us off to eat at the Longbranch — an unlikely place in this frontier town. Food exquisite, the Smothered Mexican Combination alive from item to item unlike the homogeneous sameness of most such dishes; Maggie’s trout perfect. Ya never know in a place like this — the chef is European, sick of big cities. Maggie’s thinking of writing a companion book, a book by my companion, a compendium of eateries and recipes discovered through the endless wanderings of two sensory mendicants. Maggie might not put it quite like that, but that’s the way it feels.

Tired bad, but last gasp:  tub room. Frolic in the bubbles, moans lost in the wet roar, door open to the night pouring steam and admitting more of that crispy Colorado air. Earlier, when we’d left the room, I’d locked the key inside and now I had to play cat burglar to regain entry without waking our friendly hosts. Brought to mind a moment about 24 hours earlier, somewhere in the eastern Colorado plains, when I locked the keys in the van. Not like me, really, any of this. I climbed in through the sunroof, attracting more than one startled glance.

Just a jaunty way to hop into my van, ma’am — I used to drive a convertible.

And now, west again. Three days to make the drive to Vancouver, a lifetime of sights in between.