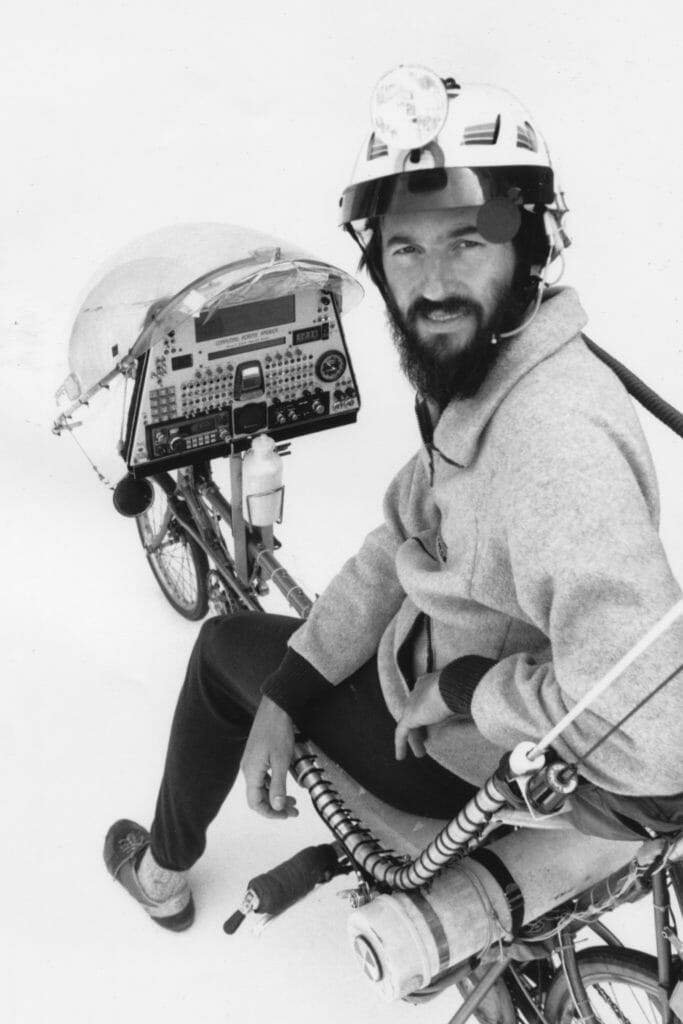 Part of my series in Computer Currents during the Winnebiko II epoch, this celebrates the magic of packet radio… data communications on the ham bands while mobile. This technology was an early hint of what we now take for granted, with a computer in every pocket!

In those days, exchanging messages with others required a deep understanding of the technology, network architecture, and obscure command-line interfaces. It wasn’t easy to do, but it was absolute magic… imagine stepping out of a diner in the 1980s to find the bike console blinking with an email invitation for shower and a place to spend the night. Transformative stuff.

On-line and On the Air

I’m writing this column on the bike, playing the handlebars like an electronic flute as I pedal the midwest away.

Words appear on the console LCD as around me passes the hazy, muggy farmland of central Ohio. It’s not a particularly inspiring sight, as sights go… but my mind is elsewhere.

A few moments ago, you see, I had a thought about a friend in Palo Alto, California, the kind of thought that would normally result in a mental note to send a card one of these days. (We all know how that goes.) But instead, I sent him E-Mail — from the bike — while rolling.

The process was simple enough. Flicking a few console switches, I fired up the bicycle control processor, the Tandy Model 100 “text engine,” and the packet data communication system, With subtle fingertip motions. I typed c w8cqk on the handlebars.

The response was immediate: *** CONNECTED TO W8CQK. Now that I was linked to a nearby BBS via a 1200 baud 2-meter radio modem, sending a cross-country message was easy; I just keyed in the text and directed it to my friend’s call sign at the Palo Alto packet bulletin board system (N6IIU-1). Sometime in the next day or so, he’ll log on via radio and find it in his mailbox.

Packet radio can be used just as easily for “live” contacts: a few weeks ago, I was in Califomia pedaling to Mountain View while chatting digitally with a fellow in Morgan Hill (who was also mobile, en route to Monterey). I cycle into towns and meet people on-line before even getting off the bike… and everywhere, I find the swirl of chat-style communication that we have come to associate with the on line “CB” simulators. On top of all that, of course, there are standardized methods for file transfer — including graphic maps of the evolving network itself to help us navigate through the complex swirl of new systems.

There’s a certain thrill in this — and not just because I can do it on a rolling bicycle. This communication is taking place through a self-sustaining, indestructible network — a network without a corporate substrate. Hit a psychological Control-S and think about that for a moment.

Interesting implications, eh? Every node in the packet network is privately owned, automatic, and cognizant of its neighbors. These systems spend a lot of their time forwarding message traffic — and there are a number of backbone paths for rapid long-distance datacomm. (The “wormhole,” for example, is a satellite link between the Bay Area and College Park, Maryland… so easy to use that it’s almost startling.)

Where has all this come from? How does it work? And most important, what does it mean to the growing number of people who are beginning to sense that Dataspace is the ultimate stable information home? 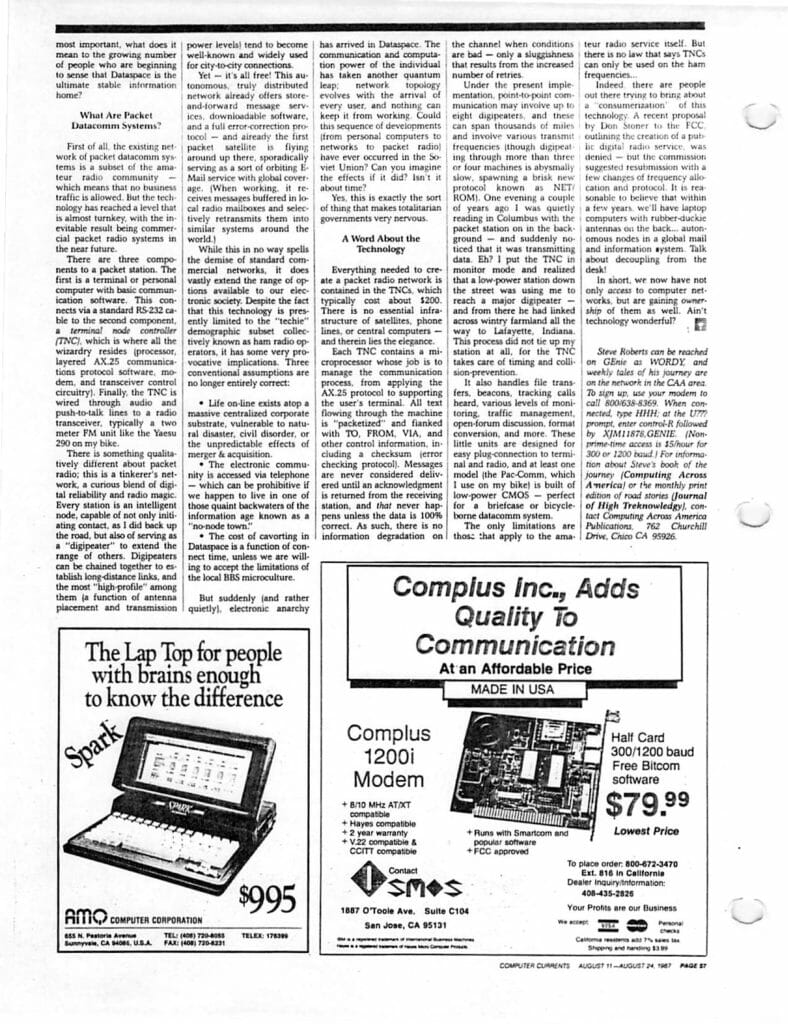 What Are Packet Datacomm Systems?

First of all, the existing network of packet datacomm systems is a subset of the amateur radio community — which means that no business traffic is allowed. But the technology has reached a level that is almost turnkey, with the inevitable result being commercial packet radio systems in the near future.

There are three components to a packet station. The first is a terminal or personal computer with basic communication software. This connects via a standard RS-232 cable to the second component, a terminal node controller (TNC), which is where all the wizardry resides (processor, layered AX.25 communications protocol software, modem, and transceiver control circuitry). Finally, the TNC is wired through audio and push-to-talk lines to a radio transceiver, typically a two meter FM unit like the Yaesu 290 on my bike.

There is something qualitatively different about packet radio; this is a tinkerer’s network, a curious blend of digital reliability and radio magic. Every station is an intelligent node, capable of not only initiating contact, as I did back up the road, but also of serving as a digipeater to extend the range of others. Digipeaters can be chained together to establish long-distance links, and the most “high-profile” among them (a function of antenna placement and transmission power levels) tend to become well-known and widely used for city-to-city connections.

Yet — it’s all free! This autonomous, truly distributed network already offers store-and-forward message services, downloadable software, and a full error-correction protocol — and already the first packet satellite is flying around up there, sporadically serving as a sort of orbiting E-Mail service with global coverage. (When working, it receives messages buffered in local radio mailboxes and selectively retransmits them into similar systems around the world.)

While this in no way spells the demise of standard commercial networks, it does vastly extend the range of options available to our electronic society. Despite the fact that this technology is presently limited to the “techie” demographic subset collectively known as ham radio operators, it has some very provocative implications. Three conventional assumptions are no longer entirely correct:

But suddenly (and rather quietly), electronic anarchy has arrived in Dataspace. The communication and computation power of the individual has taken another quantum leap; network topology evolves with the arrival of every user, and nothing can keep it from working. Could this sequence of developments (from personal computers to networks to packet radio) have ever occurred in the Soviet Union? Con you imagine the effects if it did? Isn’t it about time?

Yes, this is exactly the sort of thing that makes totalitarian governments very nervous.

A Word About the Technology

Everything needed to create a packet radio network is contained in the TNCs, which typically cost about $200. There is no essential infrastructure of satellites, phone lines, or central computers — and therein lies the elegance.

Each TNC contains a microprocessor whose job is to manage the communication process, from applying the AX.25 protocol to supporting the user’s terminal. All text flowing through the machine is “packetized” and flanked with TO, FROM, VIA, and other control information, including a checksum (error checking protocol). Messages are never considered delivered until an acknowledgment is returned from the receiving station, and that never happens unless the data is 100% correct. As such, there is no information degradation on the channel when conditions are bad — only a sluggishness that results from the increased number of retries,

Under the present implementation, point-to-point communication may involve up to eight digipeaters, and these can span thousands of miles and involve various transmit frequencies (though digipeating through more than three or four machines is abysmally slow, spawning a brisk new protocol known as NET/ROM). One evening a couple of years ago I was quietly reading in Columbus with the packet station on in the background — and suddenly noticed that it was transmitting data. Eh? I put the TNC in monitor mode and realized that a low-power station down the street was using me to reach a major digipeater — and from there he had linked across wintry farmland all the way to Lafayette, Indiana. This process did not tie up my station at all, for the TNC takes care of timing and collision-prevention.

It also handles file transfers, beacons, tracking calls heard, various levels of monitoring, traffic management, open-forum discussion, format conversion, and more. These little units are designed for easy plug-connection to terminal and radio, and at least one model (the Pac-Comm, which I use on my bike) is built of low-power CMOS — perfect for a briefcase or bicycle-borne datacomm system.

The only limitations are those that apply to the amateur radio service itself. But there is no law that says TNCs can only be used on the ham frequencies…

Indeed, there are people out there trying to bring about “consumerization” of this technology. A recent proposal by Don Stoner to the FCC, outlining the creation of a public digital radio service, was denied — but the commission suggested resubmission with a few changes of frequency allocation and protocol. It is reasonable to believe that within a few years we’ll have laptop computers with rubber-duckie antennas on the back… autonomous nodes in a global mail and information system. Talk about decoupling from the desk!

In short, we now have not only access to computer networks, but are gaining ownership of them as well.