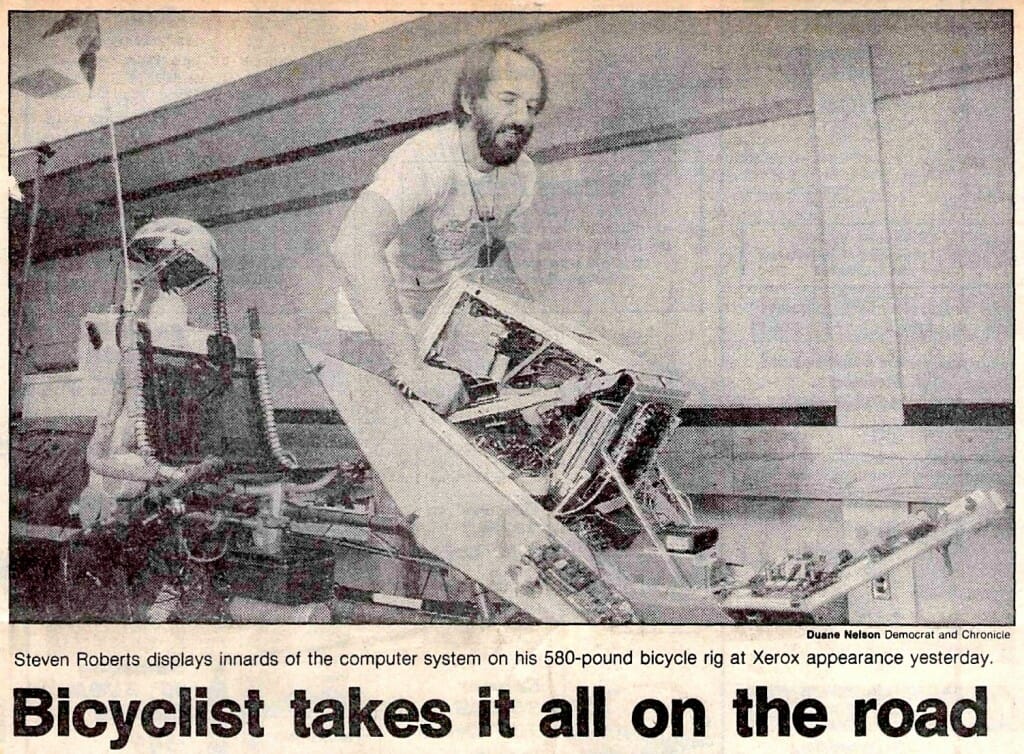 1992 was a year of zipping around the US in the mothership (a truck/trailer rig with mobile lab/office and a deployment system for BEHEMOTH), visiting companies and schmoozing for future lab space. This one was particularly fun, enabled by a Xerox engineer who had been on my mailing list for ages… and of course they gave the local paper a call. Here’s the result:

Xerox hopes he can inspire its researchers

Nine years ago, Steven K. Roberts quit his job, sold his Columbus, Ohio, home; and embarked on a bicycling journey he calls a “tour-de-force of gizmology” — riding and writing his way across America.

In that time, Roberts, 39, has become a cult hero among computer freaks and aficionados of electronic wizardry: He’s written a book called Computing Across America, and has been profiled in publications such as The Wall Street Journal and USA Today.

“I’m kind of driven by whim and weather,” Roberts told an audience of more than 100 at Xerox Corp.’s Webster Research Center yesterday afternoon. “If you’re too obsessed with where you’re going, you lose sight of the right here.”

His appearance — for which he was paid an undisclosed honorarium — was part of a regular colloquy series Xerox holds at the research center.

“If one person gets an idea from this, it’s worth the time,” said spokesman Jeffrey J. Simek.

Roberts returned to the road this year after a three-year layover in California’s Silicon Valley, where he built his third computer-equipped, reclining bicycle.

Called BEHEMOTH (for Big Electronic Human-Energized Machine… Only Too Heavy), the 580-pound, trailer-towing rig contains six computers, several ham radio systems, a heads-up display, a cooled helmet, a satellite uplink, a cellular telephone with modem and facsimile capabilities, an answering machine, a global positioning navigation system, a six-level security system, 82 watts of solar panels to power the bike’s systems, a compact disc player, a head-guided mouse, and other gadgetry too numerous to list.

The bike, built partly with equipment from corporate sponsors, would cost $1.2 million to replace, Roberts said. Using keys on the side-mounted handlebars, Roberts can write as he pedals, answer electronic mail from friends and admirers or contact acquaintances he hopes to visit or stay with. He said he’s ever in search of adventure or romance.

Roberts, tall, with longish dark hair and a beard, regaled Xerox employees during a 90-minute talk in which he detailed BEHEMOTH’S operation and recounted a few of his many adventures out on the road. His one-liners, interspersed between jargon-laced descriptions of his equipment (which themselves were accompanied by knowing nods from the audience), drew raucous laughter.

Like the time in Seattle when the helmeted Roberts pedaled up to a drive-through window at a Taco Bell, scaring a restaurant worker into speechlessness.

Giving his best Terminator impression, Roberts turned slowly and said: “Give me a burrito — resistance is futile.”

The nomad also likes to leave a tape recorder running when he’s not near the bike, just to hear onlooker’s reactions. Once, in East Texas, two passersby could be heard talking about the bike when one remarked, in a drawl, “Damn… that dude would survive a nuke-u-lar war.”

His next project: an amphibious version of BEHEMOTH.