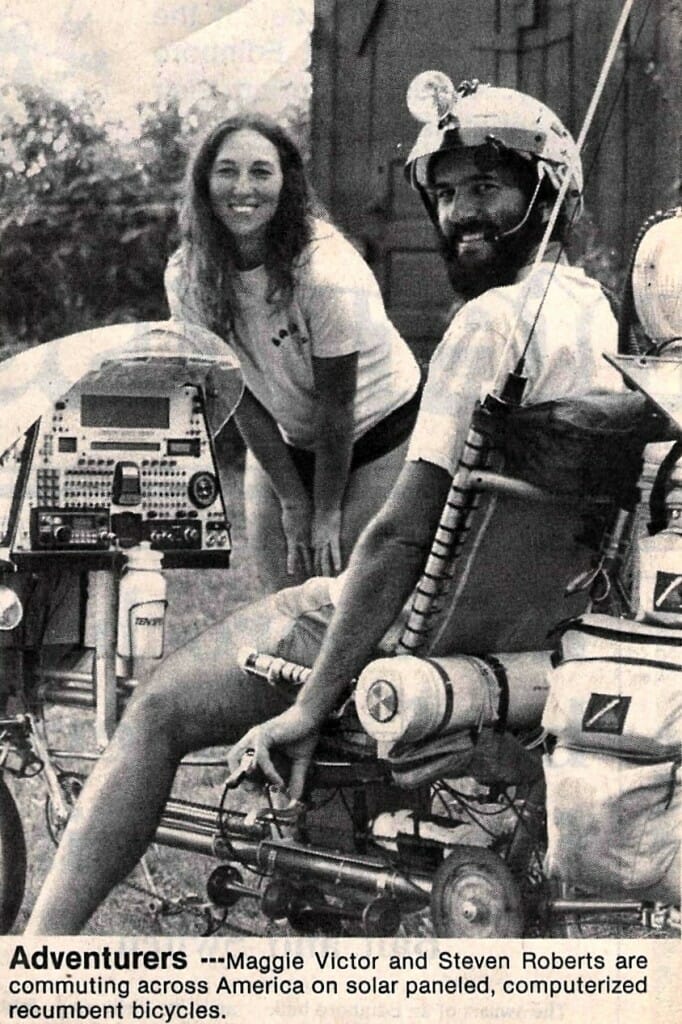 After Maggie and I left Columbus (the second time), we pedaled northeast through a brutal Ohio summer and turned right at Lake Erie. Every day or so, we chatted with local media, but this one stands out in my mind for the cute photo… and the maple syrup farm of our host. Ohhh, the yummies…

(Erie was my birthplace, so while in the neighborhood we tracked down the old house where I spent the first three years of my life. It was eerily familiar, which was somewhat unexpected, and I walked around feeling tall and old, taking photos to send to my parents in Kentucky.)

Two very unusual bikes traveled to Edinboro this past week. The riders of these bikes stopped at Janet Woods house on Fry Road.

Steven, a self taught custom engineer, gave up a successful business and ranch home in suburbia because he felt “too tied down.” Steven’s solution was to design an ingenious personalized interactive mobile office on his recumbent bicycle. The bike has been Steven’s home and office since 1983, and yields 12,000 miles.

One year ago, while in Columbus, he met his partner Maggie. It was their first date and soon after she also quit her job, sold her car and belongings to travel with Steven.

Steve uses an on-board word processing system to type as he rides. It is made up of a handlebar keyboard which works by combination finger coding comparable to playing the flute, and designed by Steven.

Steve and Maggie met their Edinboro host, Janet Woods, at Erie Peninsula during a Lakeside bike hike. They are all members of the Erie Bike association, and since Janet also owns a recumbent bike (minus the fancy computerized systems) they soon became friends and Janet invited the couple to stay in her home.

The couple was in this area because Steve wanted to visit the place in which he was born, Erie. From Erie, they drove down Route 99 to Oliver Road to get to Janet’s home.

They enjoyed the weather here since they are used to a very hot climate and humid weather as in the west. The couple said that Edinboro was “a beautiful area which they really enjoyed.” They loved being in the country and Janet said they enjoyed her fresh vegetables from her garden.

Since Steven started his travels, he now finds that he is “more optimistic than when he started,” though many people suggested to him that he would soon feel the opposite.

Because Steve does much of his work through a GEnie phone system, he says ” I have genuine close relationships with people I’ve never met. Most relationships are beginnings and endings because I’m just passing through.”

The couple say they don’t fear getting into an accident even though they’re always close to traffic. Actually, their biggest problem is other people who get into accidents because they’re watching them.

Steve and Maggie say they will continue riding until they get tired of it.

Steven has gotten lost a few times and once rode through the desert with a 103 degree temperature and no water.

Despite a few pitfalls, Steven’s advice is that if you have a dream, go for it. He says that he did and he’s never regretted it.

As for exactly where the couple is going in the future, Steven says that “if you think too much about where you’re going… you lose respect for where you are.”

Posted in Media - Winnebiko II and tagged Edinboro
← A Life on the Road – CyclistModem Up, Move ’em Out – Computer Currents →