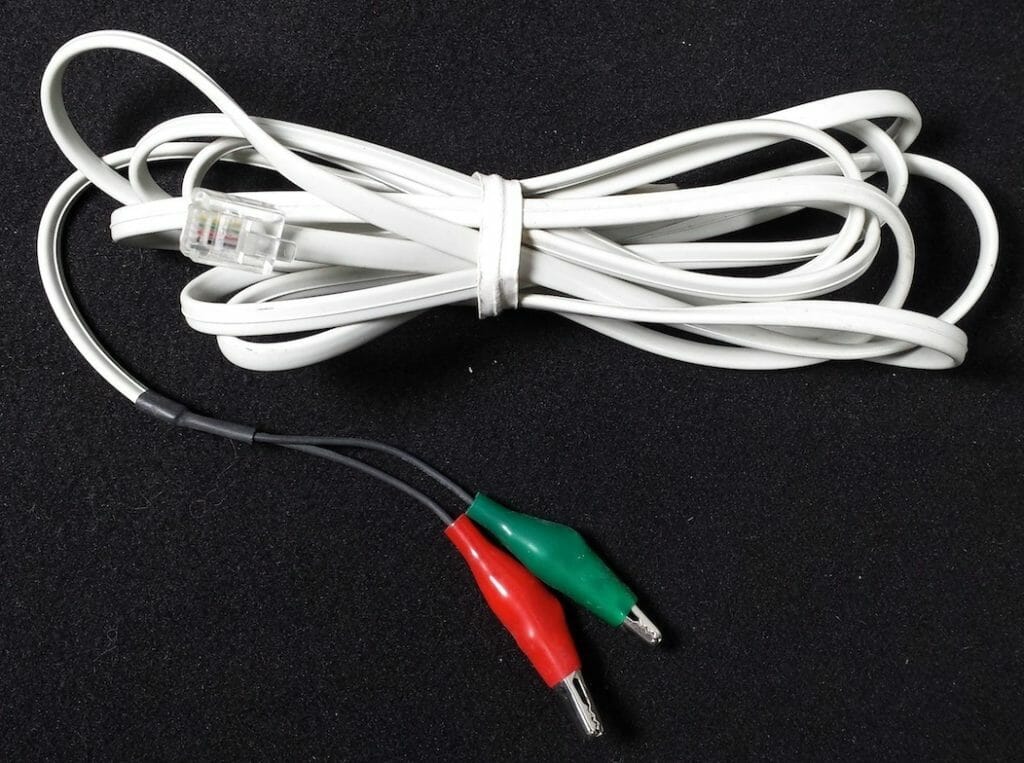 It’s easy to forget how much we had to busy ourselves with the low-level hardware just to get a net connection… physically connecting to phone lines, dealing with bulky and sometimes error-prone acoustic couplers, long-distance dialup to the nearest network node (making connect-time charges even worse). The cable in the photo above was an essential tool, when opening up a phone or removing a wall-plate to get at the phone line. This article was written while bicycling northeast in western Pennsylvania, and uploaded from a maple syrup farm in Edinboro with the Winnebiko’s odometer at 12,870 miles.

I’m helpless without my umbilicus.

I can compute my days away, conjuring rolling text files like a gypsy power-user as I pedal along the highways with more chips than chain links… but if I can’t tie myself to a twisted pair now and then I might as well jettison all this heavy gizmology at the start of the next hill. Computers would be about as useful as cellular phones in the Sahara.

But making that on-line connection isn’t always as easy as it sounds, especially out here in the wilds of America where local nodes are the stuff of science fiction and you still have to say 31 digits out loud to phone home. The communications tool-kit of a high-tech nomad must accommodate much more than that old familiar modular phone jack — unless you have lots of file space and no urgency. If you’re of a mind to wander, you must equip yourself to interface with phone lines everywhere… to the point of hauling climbers and alligator clips for poletop E-mail sessions…

Seriously, wandering around with a laptop computer and depending on the networks for communications isn’t quite as trivial as the rear-panel phone jack would suggest. Let’s look at the accessories required to make a reliable connection anywhere.

The first choice, of course, is always direct-connect — and I have found it necessary to carry a small stuff-sack of cables and adaptors to cover various situations. In particular I use two six foot male-to-male cords, one female-to-female adaptor, alligator clips, and one duplex adaptor that has two sockets and one plug. This might seem excessive, but in some primitive phone systems it is necessary to talk to an operator even when making a WATS or credit card call, requiring enough cables to connect both the computer and a phone.

Despite occasional nuisances like this, life is easy when all it takes is the delicate “tink” of a modular phone jack to make the connection.  But sometimes — in motels, phone booths, and rural homes — you might encounter telephones that were installed back before the days of modems… or units that, for one reason or another, are designed to discourage “tampering.” This calls for heavy artillery.

The obvious solution is an acoustic coupler, and I have been carrying one that plugs into the H-P’s rear-apron phone port. They work quite adequately if you can live with 300 baud, though there can be problems with noise sensitivity in the less-than-ideal setting of a phone booth (try wrapping the coupler in a towel if interference is a problem).

A clever device called the Blackjack allows you to avoid acoustic couplers whenever it is possible to unscrew the mouthpiece of a standard telephone handset (they’re glued onto pay phones, unfortunately). I have found it useful in motel rooms, where most telephones, for some reason, tend to be hardwired into the wall.  The Blackjack replaces the mouthpiece with a rubber cup having a modular jack in the middle, into which you simply plug the standard direct-connect cable. Once this is done, autodialing and 1200 baud communication are approximately as easy as they should be. (There is a problem with the first few thousand Blackjacks shipped, by the way; the units depended upon non-wiping contact between the large steel ring and the circuit board that holds the modular jack. It doesn’t take long for corrosion and dirt to make this a flaky connection. The manufacturer suggests soldering a bit of wire braid in there to improve reliability.  I would go further and use a tiny screw, solder lug, and stranded wire down to one of the circuit board pads. The devices are handy enough to justify this extra effort. If you have one, pull it apart; you’ll see what I mean.)

With these items in your laptop computer pack, you’ll only rarely be stranded without network access. Don’t forget to carry all applicable lists of dial-up nodes around the country, including direct-access numbers for those times when regional connections seem unreliable. It’s also worthwhile to carry listings of local BBS numbers, since this can be a quick and easy way to find help if you have trouble with the networks.

This raises an issue that I touched on in my last column, by the way: the problem of no-node towns. In this information age, these are the backwaters, the places limited in growth potential by the aggressive long-distance charges that accrue whenever someone in a nodeless burg visits Dataspace. You see them on-line sometimes: plaintive voices from the wilderness, staying only long enough to upload, download, say hi, and disconnect. Our network culture is stressed by opposing influences: the need to flee the madness of the city, and the urge to stay in areas where data communication is not taxed out of reach by long-distance carriers.

All I can suggest, until online access becomes truly global, is that you formalize as much of your network use as possible — automating such processes as mail transfer and RT/SIG/BBS participation. Be conscious not only of rates changing with the time of day, but also the system slack periods during which you don’t have to pay a connect-time premium for user overloading. Also, don’t hesitate to put pressure on your on-line vendors to support more towns with local nodes — especially towns where you know of many frustrated or would-be users.

This article, by the way, was begun while pedaling from Pymatuning Lake to Erie, continued between Erie and Edinboro, edited under a sugar maple tree, and transmitted from a farmhouse phone line. Ain’t technology wonderful? If I had to depend upon matter-transfer, I’d be out of business.