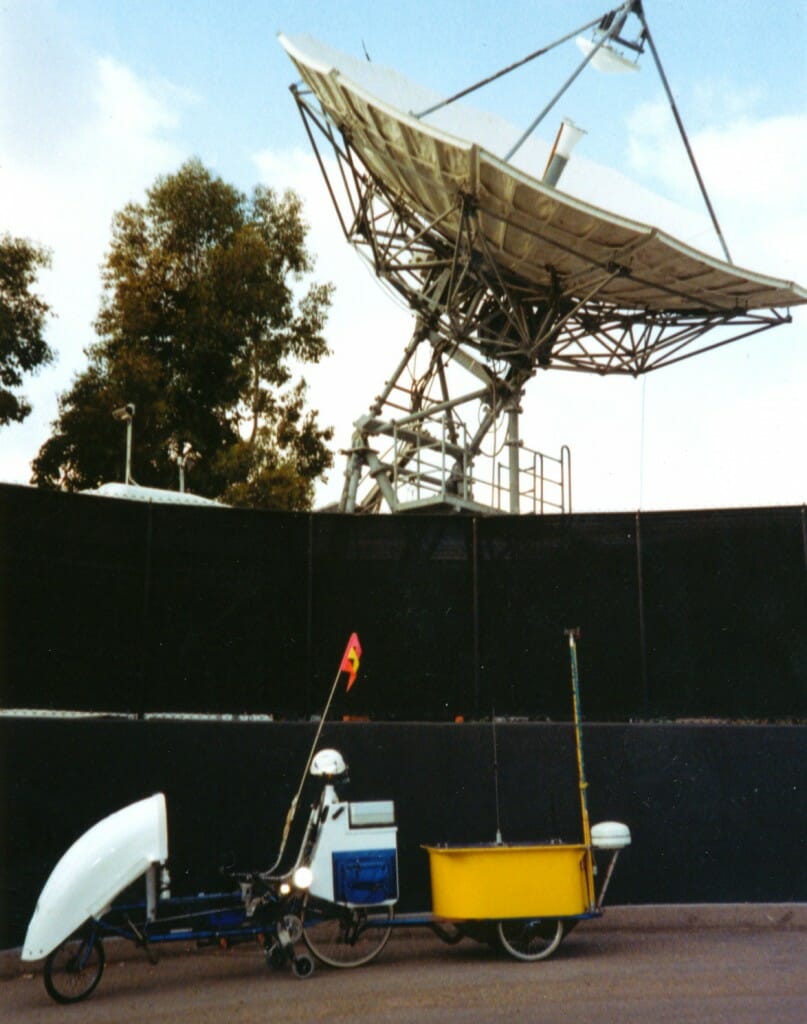 You know, sometimes this whole thing seems deliciously insane. Off the deep end. Wigged out… big time. It seldom appears to me in that light, fortunately, but occasionally I have a moment of shifted perspective — perhaps while lying under this monster trying to reach a buried socket-head cap screw with a ball driver in my fingertips, perhaps peering into the OrCAD files, or perhaps just showing it to a visitor and having a moment of empathy.

Whatever triggers it, the feeling is the same: I’m living an oxymoron. Industrial bicycle touring? Four years of full-time work on a bicycle, aided by dozens of freelancing professionals, serious R&D tools, a few subcontractors, a lab in Silicon Valley, and about 140 sponsors? All I wanted to do was go for a bike ride. The dream was so clear: living the simple life, cruising beautiful lands, seeking love and adventure while turning out a few spirited tales to keep the camp stove stoked and the bearings lubed, hanging out online, playing with ham radio, writing books while pedaling, staying linked via satellite to networks and tracking systems, hacking real-time code in campgrounds… oops, there I go again. The simple life. Right.

The problem is that I’ve become a technoid yuppie hobo. Wanting it ALL creates a real problem when your home is a bicycle. Not that I’m complaining, mind you — I’m having the time of my life — but still, every now and then it just seems like the most outrageous madness imaginable. Especially when I realize that in 17 weeks I’ll truck this thing to Omaha, of all places, then pedal shakily east, my out-of-shape knees throbbing, strange rattles stopping me for roadside tweaks, the whole gestalt of life on the road slamming me full in the face once again with all its gritty intensity. Crowds at restaurants (“Just one question,” someone always asks, not realizing that it’s not just one question: “What’s all this stuff DO?”). The daily quests for food and a place to sleep. The undercurrent of security paranoia, constant exposure to unpredictable strangers in potentially lethal vehicles, sudden honks of unknown intent, teeth-clattering roads, narrow motel-room doors, gray days of soaking rain, and through it all a recurring sense of insanity touched with moments of profound sweetness. 17 weeks until I roll BEHEMOTH out of this windowless lab and back into the wide, wide world of unknowns, at once alluring and terrifying despite 16,000 miles of experience on previous releases.

It sounds abstract and unmistakably mad, but there’s something about passion that makes it all work… and this piece I wrote for the Nomadness journal last year nails it.

Given that passionate buildup, I guess I owe you a whiz-bang development in bike-tech this issue! OK, here it is: BEHEMOTH is now connected to the network around the clock, via direct satellite data link. (NOTE: Substantial technical detail about this is in my Interop session from 1992)

No, I’m not kidding. On a small aluminum platform at solar-panel level behind the trailer is a 12″ diameter radome about 7″ tall. Inside, a little 14 GHz antenna steered by a stepper motor tracks the GTE GSTAR satellite 22,300 miles above the equator at 103 degrees. This primarily handles bidirectional mail traffic, but occasionally the antenna glances east to take a fix on a tracker satellite and triangulate its own location. While this doesn’t have the precision of the Trimble GPS, it does automatically stamp each data transmission with the location of the bike (within about 1,000 feet) and interfaces smoothly with a whole tracking system that’s already in place… handling almost 15,000 trucks, boats, cars, and airplanes around North America. In fact, my base-office PC now shows a road map on its screen, with BEHEMOTH’s location noted in purple and its travel history as a dotted blue line.

A coax cable pair links the radome with the main unit — a shock-mounted black box that now occupies the forward basement of the trailer (with a nice low center of gravity, adding significantly to that all-important road-hugging weight). This unit provides an interface to the bike’s computer network, making it a component in the whole communication and security system. At the moment, since it’s in the early phase of testing, I’m using the standard LCD terminal usually provided for the driver, but efforts are already underway to link it to the mail server in the bike’s SPARCstation and, at the other end, build a seamless connection to internet.

The system that makes all this possible is the Qualcomm OmniTRACS satellite terminal, and folks, this is some SERIOUS magic! It’s the kind of thing that makes the writer in me wax rhapsodic…

I mean, think about it. I’m already used to ham radio and the wonders of HF propagation, getting only a minor thrill from making a contact with Sweden on the amount of power in a typical Christmas tree bulb. But this is another level beyond that. Transmit power is 1 watt (somewhere in the pocket flashlight range), and the antenna’s aperture is 5 degrees wide and 40 degrees high, centered around 40 degrees elevation to insure coverage anywhere in or near the US. How much of that 1 watt makes it to the satellite drifting quietly out there in the Clarke belt, roughly four times as far from here as the diameter of the earth? What’s the path loss? It’s uncanny: I can take off the white radome and roll the bike in a circle, and that little silver antenna keeps pointing at the same spot in the sky — inhaling messages from Qualcomm’s Network Management Center in San Diego and uploading anything I dump into the buffer.

Operationally, this eliminates my dependence on a number of less reliable communication links, though I’ll keep a few as backups. There’s still a place for the CellBlazer modem, of course — when I need blinding speed to move large files like captured video frames, 10 kilobaud to the nearest cellular MTSO will be much more appropriate than the 165 bits/second of the satellite link, and well worth the air time charges (which, for some reason, seem to be among the most un-sponsorable of all nomadic commodities). And I’ll still use AMTOR and packet on ham radio, though only for non-business traffic. But the OmniTRACS terminal is rapidly becoming the centerpiece of BEHEMOTH’s mobile communications resources.

Since this technology was designed with high-value, sensitive cargo in mind (like military munitions shipments), there are quite a few system-level features that make it attractive. The network management center is staffed 24 hours a day, and a pin on the terminal’s interface connector is for a panic button. Having instant MAYDAY capability on demand — transmitted via satellite along with my latitude and longitude — makes this a major addition to the bike’s security system. And the plan now is to upload a telemetry block and brief text message every few hours, not only keeping the base office advised of all activity but also feeding the road fantasies of any “workstation traveler” who wants to ride along with me via the magic of electronics.

As implementation proceeds, I’ll have much more to report on this latest addition. Just for amusement, by the way, I added up the number of satellites that in one way or another will communicate directly with the bike. There are about 30 (including the constellation of 24 GPS satellites now 3/4 of the way to completion and four of the ham radio “OSCAR” birds created by AMSAT and UOSAT). This all extends the original model of high-tech nomadness:

Once you move to Dataspace, you can put your body anywhere you like.

What, aside from passion and satellites, has been happening in the bikelab? A few things:

The new fairing is under construction by Dave Berkstresser — he made a paper maché model with the aid of my old Zzipper lexan fairing, and has been carving nacelles into it for the headlight, Trimble GPS antenna, reflectors, and so on. This will be used to mold a Bondo “plug,” from which will be pulled a fiberglass female mold, which will finally be used to do the real thing in Kevlar.

Custom blue cordura packs of great beauty have been made for the RUMP by Jesse Newcomb, who doubles as a SCSI wizard and Stanford radio deejay. These will be sealed onto the fiberglass sides instead of my original flush doors, which turned out to be almost impossible to seal without lots and lots of gasket-compression latches. They’re quite waterproof, offer easy-access space for small items, unzip to expose the SPARC bay (left) and the fridge (right), and, hopefully, in an accident will help protect the fiberglass.

I just finished the power conversion panel, mounted on a comm bay sidewall across from all the battery management hardware. This area includes a power entry module (mounted with PEM nuts, of course), the Resonant Power Technology 12V 10A switcher for charging from the AC line, a Statpower inverter to run 110V appliances from bike power, and the HV supply for the 1mW HeNe laser (hey, ya gotta have a toy).

Finally, there’s been a lot of pondering here (with the aid of Geoff Baehr and a few other networking gurus) about how to make the Ethernet connection between Mac, PC, and SUN environments. The smoothness of the on-board network will have a lot to do with riding pleasure, so we’re trying to make the right choices up front. So far it looks like Xircom’s Pocket LAN adapter for the Ampro PC, LRU’s Nodem for the Mac SCSI port, PC-NFS on the former, MacX on the latter, the SPARC doing just what it was designed to do, and about 10 feet of coax to tie ’em all together. World’s smallest multi-platform 10 MHz LAN…

I was explaining the bike to a ham in Osaka on 10 meters the other day, speaking carefully across the language barrier. When I turned it back over to him, he replied with enthusiasm: “Ah, Hari Davidson!”

Kanpai from the bikelab!!!