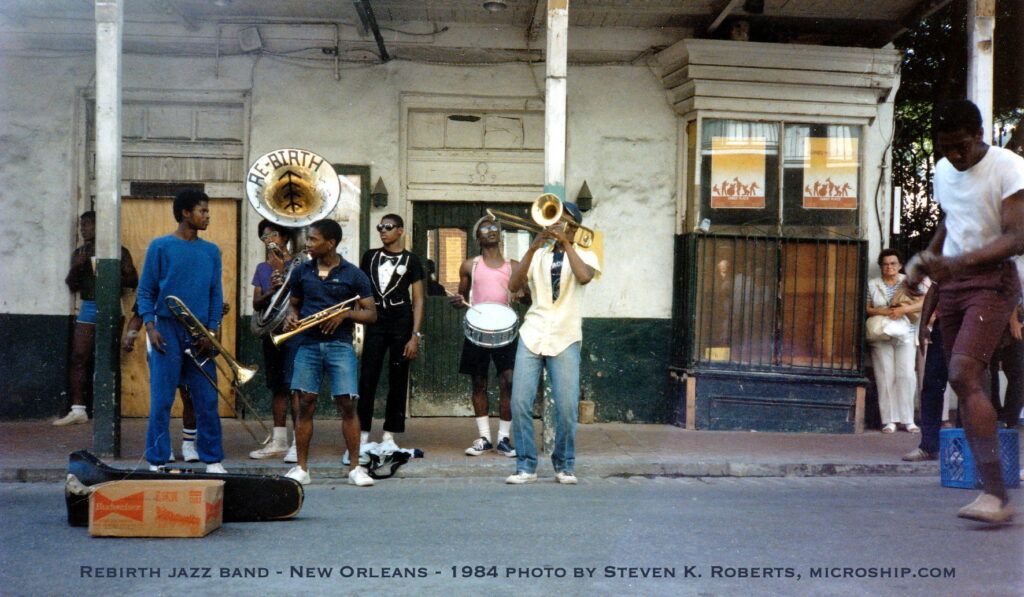 Above: the Rebirth jazz band in 1984 (photo by Steven K. Roberts)

NOTE: We were in New Orleans July 9-12, 1988, exhibiting the bike and signing copies of Computing Across America at the 107th annual conference of the American Library Association. This little impressionistic story is not about that event, however, but about what happened when we ventured out of the Olivier Guest House to explore the French Quarter.

There’s a sort of melancholy about this city, you know, a strange melancholy that excites the lusts and touches the soul… and every descent from our balconied French Quarter suite into street-level turmoil makes the keyboard fingers itch. Stories lurk in the dark eyes that glower from shadows, in the antics of children marked by street life, in the crenelated faces of those who were here to watch the first electric streetlights sharpen their familiar shadows. This is a rare thing in post-video America: a city’s identity proclaimed by every street, every guitar lick, every face, every shot of Jägermeister swilled before breakfast in Molly’s Irish Pub.

And in the deep sultry night the rhythms of cultures mingle. Stand at Toulouse and Bourbon and let them shake you — a thrumming confusion of blues, rock, jazz, Dixie, and a passing nuclear-powered automotive rap machine with enough oomph to perform CPR on the driver. Swirling through the violent acoustic crossfire is a motley fluid of drunken humanity, and if my metaphors seem mixed… it’s no accident. So is the reality.

People! Blacks from the projects, street-wise, white eyes darting between the blues man’s golden sax and tan legs that lure imaginations past the hem of a passing red miniskirt. Tourists of all flavors, ambling with too-deliberate ease along a path that avoids the ruffians — eyes alert to the approach of hustlers, drunks, or the titillating shopfronts of commercial naughtiness. Sixties carryovers, ponytailed, attitudes revealed less by hard-rock style than by a sort of Rockwell hardness index of the eyes. Hawkers, luring people into doorways to glimpse nude women writhing on smoky stages. Cops, jaded and confident, frisking passers-by with a glance and arresting the city’s descent into behavioral entropy by their very presence. The rich, too well dressed, slumming. The bottom out-of-sight poor, eyes pleading, slumped against dirty walls in visible dejection. Con artists, accosting the naive. Musicians, easy in their element but disturbingly ordinary-looking off stage, commuting the side streets with battered instrument cases. Mimes, eloquent and graceful, filling cash boxes with the wordless poetry of dance. Hookers swaying practiced hips under the lacy incongruities of Frederick’s. Librarians on furlough from the conference, walking in close wide-eyed groups in this place far from Kansas. Ordinaries, who could be up to the most heinous of evils and never show it. Gays, laughing their way down the street with hands on each other’s bottoms. Cabbies lending a touch of hard-edged New York raucousness with ready honks and impatient driving styles. Whooping college students, hell-bent on having a good time, clutching paper-cupped Hurricanes while getting down in coarse parody of the bloods who lend authenticity to what might otherwise degenerate into a Daytona Beach. Old coots, young nimble break-dancers, lost drunk high-school kids, businessmen recovering from business, toughs on missions of darkness and terror, brain-damaged druggies slurring curses, and the gaudy human echoes of Mardi Gras. And above all, such a variety of bodies and faces that no stroll through the maelstrom can fail to yield arousal, disgust, longing, fear, awe, nostalgia, and laughter (sometimes… all by the same person.)

Jackson Square. Jax Brewery. Café du Monde. The shops and museums of Royal Street. The city by day is awash in tourism, an economy based on T-shirts, beignets, ceramic masks, artwork, and endless variations on the almighty souvenir. For 75 cents, you can knock back an oyster shooter — a raw gob of glistening gray flesh swimming in a dollop of Bloody Mary mix. At Mr. B’s Bistro, the bartender muddles an Old Fashioned while keeping up a running commentary on local food, music, and shops. At Molly’s breakfast, fogged penitent eyes and tortured foreheads mark the hung-over. It’s all here: portrait artists competing for sittings, joggers in the park, calliope toots under rising columns of riverboat smoke, sunsets over the cathedral, fleshy old women in ghastly pastels clutching beaded handbags, a pricey gallery of Lennon and Erte, bored horses with flowered hardhats standing before idle buggies, coarse propositions muttered to any female on the street, a cappella falsetto soul scatting, mingled languages, heart-pounding glimpses of flesh and ecstasy, ripoffs, good deals, brutal humidity, and interludes of iced cappuccino to cool the sweat.

And what delights me most in all this is that it knows itself, celebrates itself, procreates itself like a giant mutant amoeba. New Orleans is its own species, not a homogenized amalgam of malls, billboards, and suburban conformity; this city rejects the ordinary by seducing it, assimilating it, and changing it forever.

It’s hard to leave this place. I write now at a worn table in Molly’s, dark walls around me plastered with yellowed business cards dating back to the 60’s. The clientele is varied: hungover Smiley asleep against the pay phone, a woman in too-tight leather, a street-scarred longhaired Asian, a scattering of tattooed regulars. Another perfect omelette just met its match, and I alternate between coffee, water, and Jägermeister while trying to capture something of this town. And oddly, I find I don’t want to go.

Cities usually chase me away with noise and danger. This place has both in abundance, but I think there’s no hurry… and I certainly don’t miss the hot smelly bus and its load of clutter. I know this little place down on Decatur where the jambalaya can make you crazy…