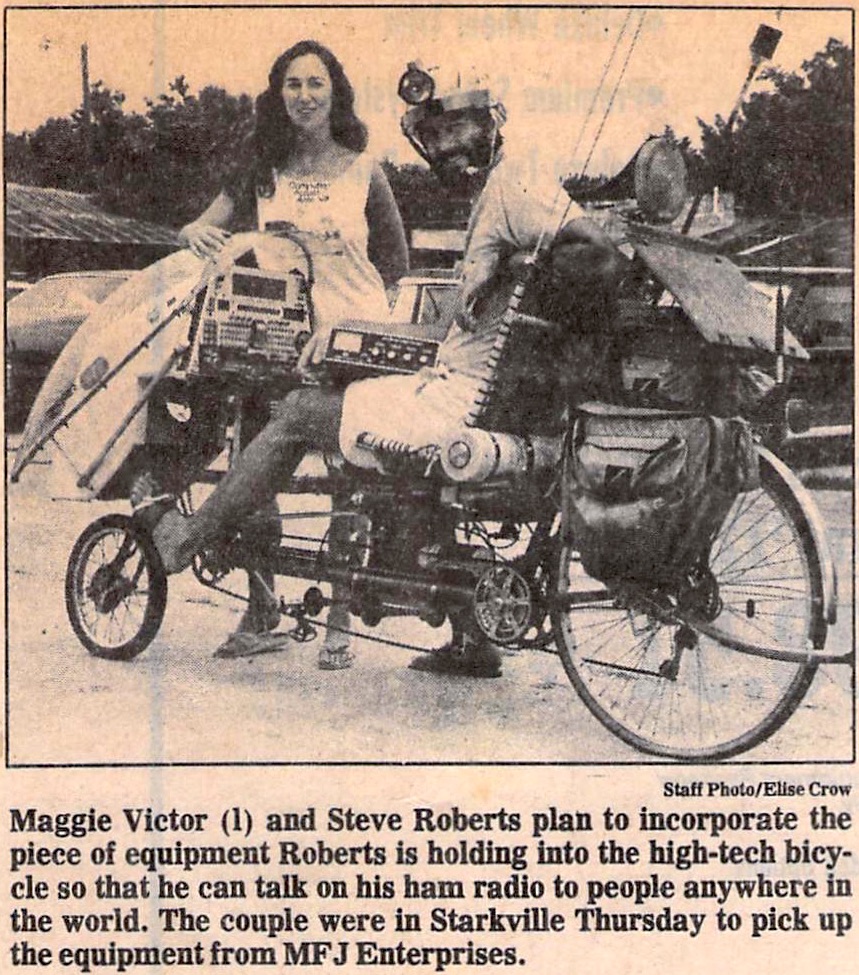 A visit with MFJ in Starkville, Mississippi to pick up a couple of antenna-system accessories for the upcoming BEHEMOTH led to this story in the local paper…

When Steven K. Roberts got fed up with his $2,500-a-month lifestyle as a consultant in Columbus, Ohio, he decided to create a lifestyle full of his passions.

“I was tired of working so hard only to pay the bills,” Roberts said. “That was irrational.”

So with his loves of bicycling, traveling, adventure, computers, amateur radios and publishing, Roberts left Columbus, Ohio, behind.

For the past five years he has traveled 16,000 miles across the United States on his bicycle — if it can still be identified as that. Roberts’ bicycle has five computer systems, a computer keyboard, a ham radio, antennas, a solar screen, a trailer carrying a lap-top computer among other items, and, his latest addition, a cellular phone.

His bike hasn’t always been so loaded, though. Starting out, he had a lap-top computer and a solar panel. But traveling through west Texas, Roberts said he was frustrated with all the ideas he lost while riding. So with about two-years worth of work, Roberts revamped commercial equipment and built other pieces himself to create the bike he now rides.

He put a computer console between the handlebars and added handbars to the sides of the seat, with which he steers the bike and types at the same time. By pressing combinations of eight buttons on the handbars, Roberts can type up to 30 words a minute. His computer can also talk — from telling people not to smoke to sounding an alarm if someone tries to tamper with it.

With all of his equipment, Roberts maintains a business to support himself. As a freelance writer, he has written four books and writes a monthly column for “73,” an amateur radio magazine. Roberts can transfer the work from his computer on the bike to his lap-top computer. From there, he transmits by telephone to his home office in New Albany, Ind. He can also receive messages and mail from his base through the computer system.

Roberts said he logs about 65 miles a day peddling his 275-pound bike. Along the way, he usually stays with some of the 3,000 contacts he has made by attending ham radio shows across the country. Other times he opts to camp and sometimes he “credit card” camps, or stays in hotels.

Roberts said he does get tired of riding around after about six months to a year on the road. During his breaks,he writes, consults or works on his bike. But after a few months, he gets the “itch” to get back on the road.

“It’s addictive,” Roberts said, describing his lifestyle as “full of new beginnings with enough stability to tie everything together.”

After the first 10,000 miles of what he termed an “epic bicycle tour of the U.S. and the world,” Roberts returned to Columbus to do some consulting work. During that time he met Maggie Victor, fell in love, and asked her if she wanted to go for a “bike ride.” Six months later, after selling her house and equipping another bicycle with a ham radio and a solar panel, the two were off on their ride. Victor has logged about 6,000 miles so far.

The two were in Starkville Thursday to get some equipment from MFJ Enterprises, which makes accessories for ham radios. Roberts, who had met owner Martin Jue at a ham radio show, said MFJ has two pieces of equipment for ham radios that he wants to combine and condense to give him the capability to talk to people anywhere in the world from his bicycle.

He said MFJ may market the combined product after he does the testing for it. Putting a piece of equipment on a bicycle puts it to the test, Roberts noted. “If a cellular phone can function on a bicycle, you know it can function just about anywhere,” he added.

Although they brought their high-tech bicycles to Starkville, this time around Roberts and Victor are traveling by an old school bus. This way they can update Roberts’ bike and more efficiently promote his latest book, “Computing Across America,” full of tales of Roberts’ days on the road. Work on his bike will include adding a larger screen to his console so that he can have a complete mapping system on his computer. He also plans to build a new trailer that is entirely covered with solar panels to increase his computer energy.

Today the two will leave Starkville for New Orleans to sell his book at the American Library Association convention.

Has Roberts’ lifestyle caught on? As far as high-tech cyclists, Roberts said he knows of no imitators. “But I have triggered people to take off and pursue their dreams,” he added. “That’s what I want to do — encourage people to do what they really want to do.”