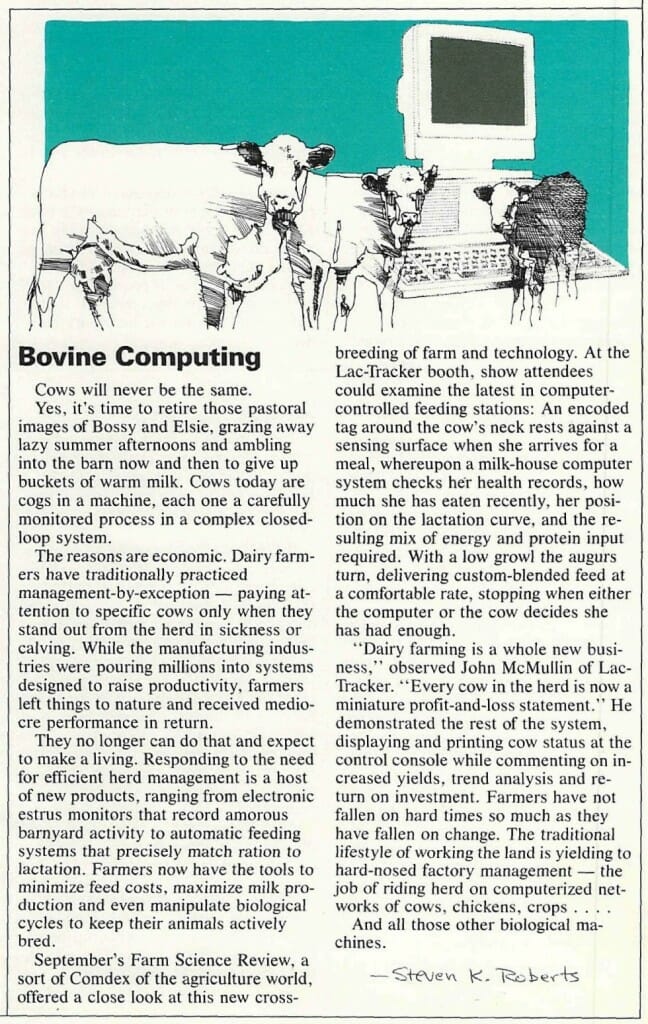 During the ’80s, I got into a kick of finding interesting computer applications in unfamiliar fields, then writing about them for my favorite magazines. Interesting stuff always happens at the boundaries between specialties, and this let me be a productive dilettante, surfing the knee of the learning curve without having to spend too much time immersed in any one field.

I returned to Ohio after the first 10,000 miles of bicycling, trying to figure out what next. Thus ensued a brief freelance writing phase that included an interview with a new optical disc manufacturer… which turned into actual employment for about six months (nothing like 8 hours a day in an office to remind me of why I loved the road!). But this little piece for CompuServe’s magazine was… about cows.

Cows will never be the same.

Yes, it’s time to retire those pastoral images of Bossy and Elsie, grazing away lazy summer afternoons and ambling into the barn now and then to give up buckets of warm milk. Cows today are cogs in a machine, each one a carefully monitored process in a complex closed-loop system.

The reasons are economic. Dairy farmers have traditionally practiced management-by-exception — paying attention to specific cows only when they stand out from the herd in sickness or calving. While the manufacturing industries were pouring millions into systems designed to raise productivity, farmers left things to nature and received mediocre performance in return.

They no longer can do that and expect to make a living. Responding to the need for efficient herd management is a host of new products, ranging from electronic estrus monitors that record amorous barnyard activity to automatic feeding systems that precisely match ration to lactation. Farmers now have the tools to minimize feed costs, maximize milk production and even manipulate biological cycles to keep their animals actively bred.

September’s Farm Science Review, a sort of Comdex of the agriculture world, offered a close look at this new cross-breeding of farm and technology. At the Lac-Tracker booth, show attendees could examine the latest in computer-controlled feeding stations: An encoded tag around the cow’s neck rests against a sensing surface when she arrives for a meal, whereupon a milk-house computer system checks her health records, how much she has eaten recently, her position on the lactation curve, and the resulting mix of energy and protein input required. With a low growl the augurs turn, delivering custom-blended feed at a comfortable rate, stopping when either the computer or the cow decides she has had enough.

“Dairy farming is a whole new business,” observed John McMullin of Lac-Tracker. “Every cow in the herd is now a miniature profit-and-loss statement.” He demonstrated the rest of the system, displaying and printing cow status at the control console while commenting on increased yields, trend analysis and return on investment. Farmers have not fallen on hard times so much as they have fallen on change. The traditional lifestyle of working the land is yielding to hard-nosed factory management — the job of riding herd on computerized networks of cows, chickens, crops…

And all those other biological machines.