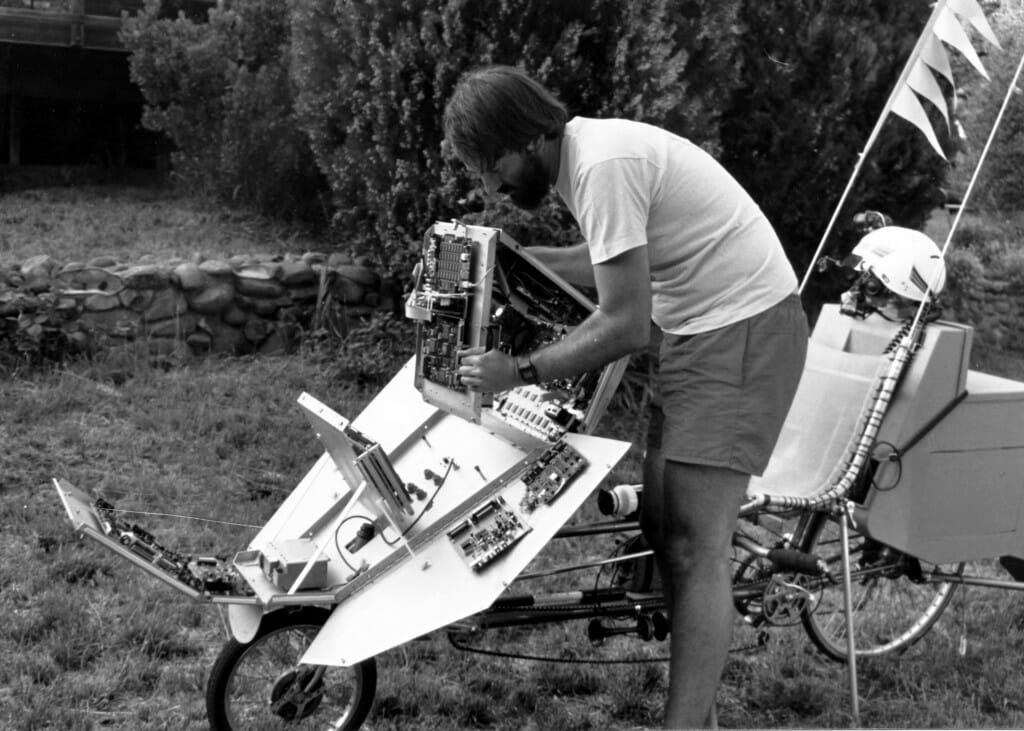 By the beginning of 1990, on the heels of the Santa Cruz earthquake and before moving over to the Sun Microsystems lab in Silicon Valley, I was trying to build energy for the upcoming adventure by finding others to form a technomadic community. This went out to my Nomadness mailing list:

Hello from the Winnebiko lab! Last year, I posted an  invitation to a few special people who want to abandon their current  lifestyle and hit the road on a human-powered network node,  freelancing for a living while traveling full time with a small ad- hocracy of like-spirited nomads. I got some fascinating responses…  and some are seriously interested.  Now it’s time for one more “CQ”  before we start firming up the initial community.

I am currently in the Santa Cruz area, building the Winnebiko  System 3. It’s getting completely out of hand:  barely recognizable as  a 54-speed recumbent bicycle, it is becoming a mobile satellite earth  station, computer network with WAN links, file server, unixycle,  robust ham shack, human interface research project, solar power  system, and complex real-time control environment with 8  computers (not including the embedded systems).  It’s all quite  insane… and exquisite fun.

But there’s something missing. I’ve been living a wildly  stimulating life on the road, made up of beginnings and endings —  first by traveling 10,000 miles solo, and then via another 6,000 miles  with Maggie.  What I’m trying to do now is reach “intellectual critical  mass” by assembling a nomadic community of freelancers, all sharing  the fundamental support resources of base office, email systems,  account management, and logistical support… and all benefiting from  the publicity and energy of the whole group. I foresee many years  of open-ended bicycle travel with 4-10 people, each plying a trade,  consulting, writing, doing video, or otherwise making a living through  the magnificent information tools that are now available. Inevitably,  some will drop out after a few months while others will join… there  are no contracts or obligations beyond the simple desire to live a life  of high-tech nomadic adventure shared with a few special friends.

There’s a lot to this idea, and it takes a while to explain. I have  thus put together a lengthy document entitled “Call to Nomadness,”  and this letter is just a feeler to see if you’re interested in receiving a  copy (level 1 filter, so to speak). During the next six months or so,  we will be working more and more closely with the few wild spirits  who are ready for major change, and NOW is the time for us to start  finding out who they are! There are a staggering number of projects  to complete between here and departure.

If you are restless, hungry for adventure, tired of the same old  routines, capable of making some kind of freelance living, curious  about the world, willing to get a ham license, unfazed by steep  learning curves, free of major encumbrances, and intrigued by this  crazy idea, please contact me. At this stage, it’s all exploratory, so  don’t worry about committing yourself to anything — just let me  know if you seriously think you might be interested and I’ll send you  a detailed explanation of the whole concept. I hope to hear from  you!

Posted in Nomadness Reports
← The Spectrum ProbeCall to Nomadness →