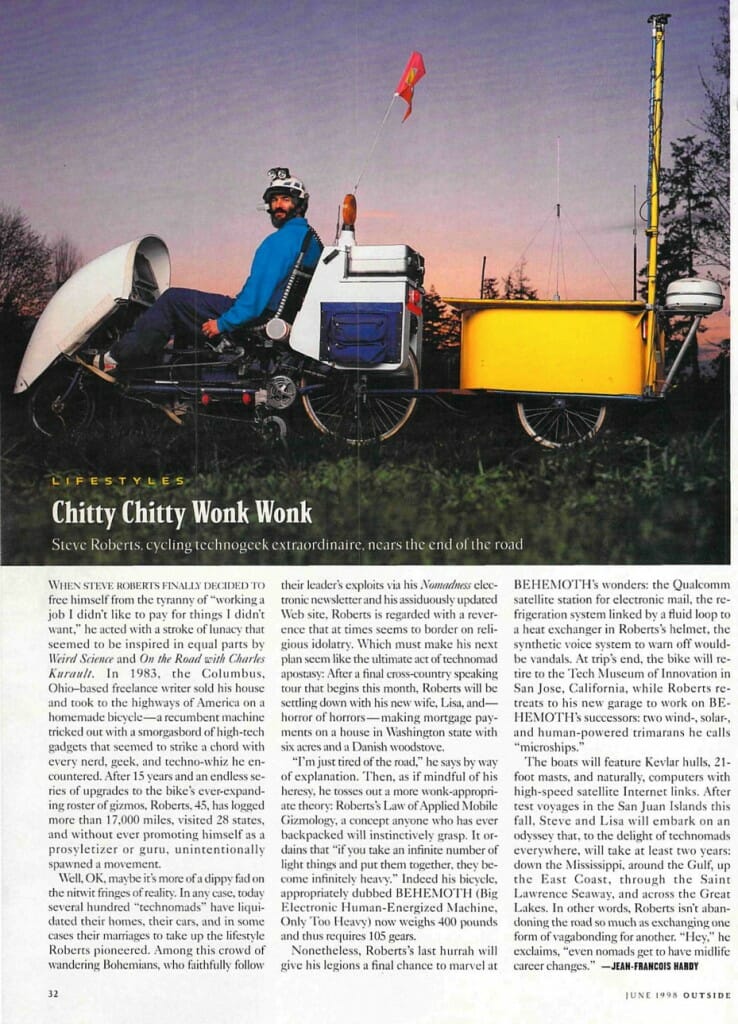 This article appeared just as I was settling down into the new Microship lab on Camano Island, Washington… for what I thought would be a 2-year development project. The piece is a reminder of the danger inherent in publicly predicting expedition plans; boat-building has a way of dragging on for decades, and life keeps evolving. Stories published during major transition phases tend to be particularly inaccurate in retrospect, though this one is well-written and has a most unusual slant. It was fun being in Outside Magazine, one of my favorite armchair-adventure escape rags!

by Jean-Francois Hardy
Outside Magazine – June, 1998
Photo by Rex Rystedt

WHEN STEVE ROBERTS FINALLY DECIDED TO free himself from the tyranny of “working a  job I didn’t like to pay for things I didn’t want,” he acted with a stroke of lunacy that seemed to be inspired in equal parts by  Weird Science and On the Road with Charles Kurault. In 1983, the Columbus, Ohio-based freelance writer sold his house and took to the highways of America on a homemade bicycle — a recumbent machine tricked out with a smorgasbord of high-tech gadgets that seemed to strike a chord with every nerd, geek, and techno-whiz he encountered. After 15 years and an endless series of upgrades to the bike’s ever-expanding roster of gizmos, Roberts, 45, has logged more than 17,000 miles, visited 28 states, and without ever promoting himself as a proselytizer or guru, unintentionally spawned a movement.

Well, OK, maybe it’s more of a dippy fad on the nitwit fringes of reality. In any case, today several hundred “technomads” have liquidated their homes, their cars, and in some cases their marriages to take up the lifestyle Roberts pioneered. Among this crowd of wandering Bohemians, who faithfully follow their leader’s exploits via his Nomadness electronic newsletter and his assiduously updated Web site, Roberts is regarded with a reverence that at times seems to border on religious idolatry. Which must make his next plan seem like the ultimate act of technomad apostasy: After a final cross-country speaking  tour that begins this month, Roberts will be settling down with his new wife, Lisa, and — horror of horrors — making mortgage payments on a house in Washington state with six acres and a Danish woodstove.

“I’m just tired of the road,” he says by way of explanation. Then, as if mindful of his heresy, he tosses out a more wonk-appropriate theory: Roberts’ Law of Applied Mobile Gizmology, a concept anyone who has ever backpacked will instinctively grasp. It ordains that “if you take an infinite number of light things and put them together, they become infinitely heavy.” Indeed his bicycle, appropriately dubbed BEHEMOTH (Big Electronic Human-Energized Machine, Only Too Heavy) now weighs 400 pounds and thus requires 105 gears.

Nonetheless, Roberts’s last hurrah will give his legions a final chance to marvel at BEHEMOTH’S wonders: the Qualcomm  satellite station for electronic mail, the refrigeration system linked by a fluid loop to a heat exchanger in Roberts’ helmet, the synthetic voice system to warn off would be vandals. At trip’s end, the bike will retire to the Tech Museum of Innovation in San Jose, California, while Roberts retreats to his new garage to work on BEHEMOTH’s successors: two wind-, solar-, and human-powered trimarans he calls “microships.”

The boats will feature Kevlar hulls, 21 foot masts, and naturally, computers with high-speed satellite Internet links. After test voyages in the San Juan Islands this fall, Steve and Lisa will embark on an odyssey that, to the delight of technomads everywhere, will take at least two years:  down the Mississippi, around the Gulf, up the East Coast, through the Saint Lawrence Seaway, and across the Great Lakes. In other words, Roberts isn’t abandoning the road so much as exchanging one form of vagabonding for another. “Hey,” he  exclaims, “even nomads get to have midlife career changes.”

The bike actually moved to the Computer History Museum (link opens to photos), though I flirted for a while with The Tech… I am no longer in the relationship mentioned in the article… the Microship trimaran has been replaced by a much larger vessel… and the photo was taken in my front yard on Camano Island (where I am no longer living). 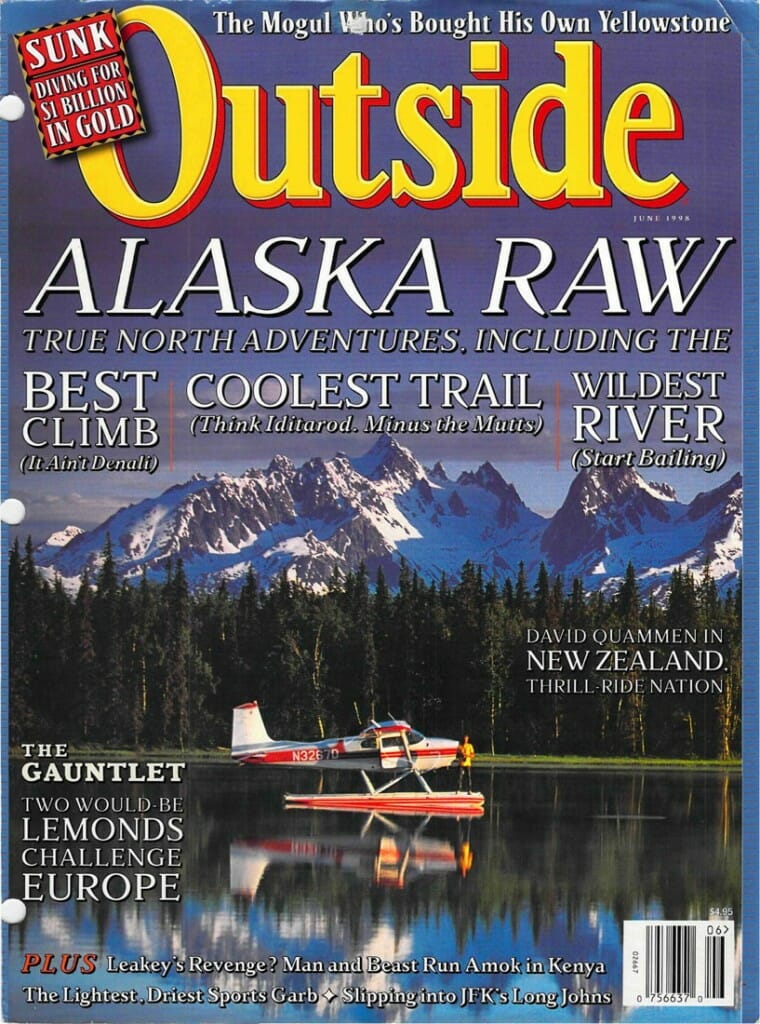