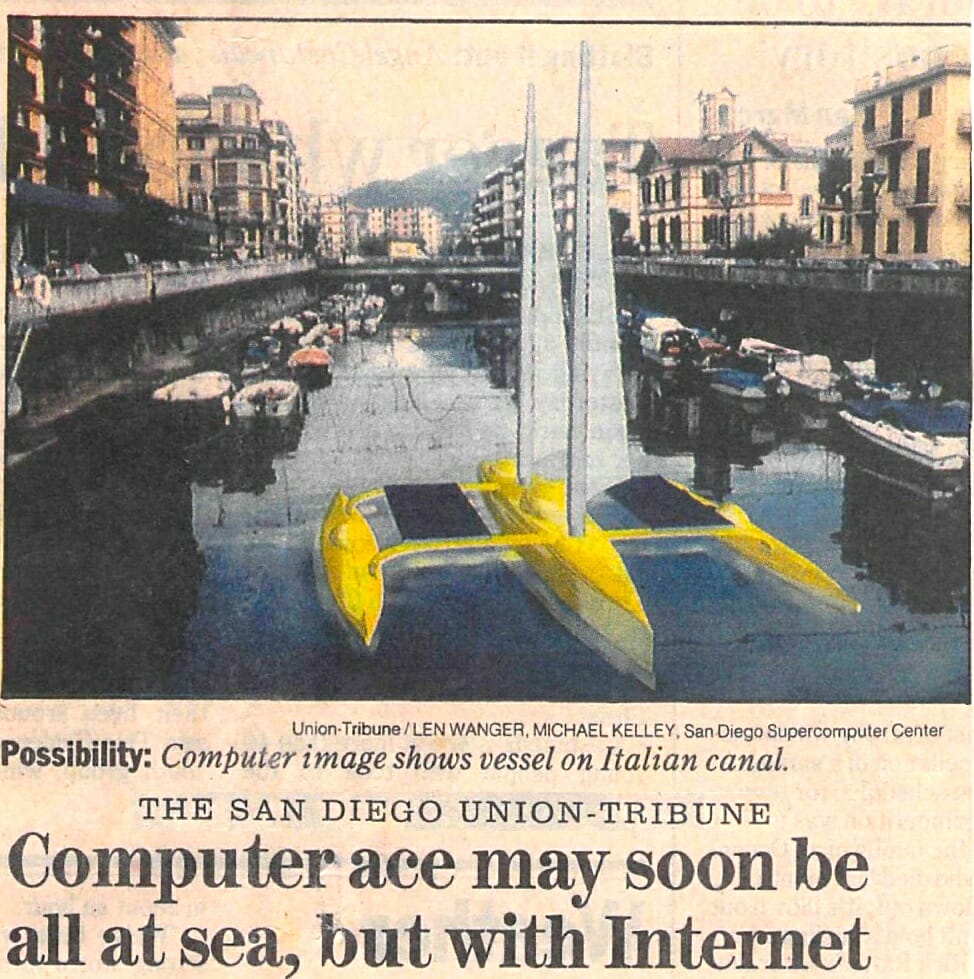 This article came out while I was starting to work with groups of engineering students at the University of California, San Diego… I landed there as adjunct faculty, and taught a projects class in exchange for lab space and eager humans. I think some of the “old guard” was wondering what a non-academic bozo was doing with prime real estate in the building, but we had some excellent successes… and a flurry of media, as always, helped smooth the way.

This photo was done by Len Wanger using modeling tools at the San Diego Supercomputer Center.

Steve Roberts’ life is a testament to what can happen when wanderlust is infused with an enthusiasm for computer communications.

Self-trained, Roberts left behind a more traditional American Dream in Ohio a decade ago to take to the open highway on an elaborate bicycle that he equipped with a computer, modem and satellite receiving dish. Everywhere he went, he could send and receive messages on the computer as he pedaled.

“I realized what I was doing was boring, and I was paying for things I didn’t want anymore — a house, insurance, and a station wagon,” Roberts said, recalling his decision to leave.

In the ensuing years, he biked cross country, attracted a flood of media attention, made hundreds of friends through the Internet computer communications network, fell in love “on line” a time or two and wrote a book about his adventures.

Now, Roberts, 41, has settled, albeit briefly, in La Jolla at the University of California San Diego while he plots his next adventure — taking to the water in a tri-hulled sailboat that also has an elaborate computer station for writing and communicating.

“I got tired of the highway,” he said recently. “It was becoming a day-to-day struggle just to survive.”

Roberts is a visiting scholar at UCSD through the spring of next year, when he expects to launch the new vessel. He is designing and building it with help from engineering and computer science students who not only receive course credit but some practical experience that Roberts thinks they may be lacking. Finding college too confining, he himself dropped out his freshman year and never returned.

He undertook the first of what became three bicycle journeys after realizing what he had passion for. He jotted down a list of that included: computers, travel, writing and “cool gadgets.”

“The obvious thing was to see if I could blend all of what I cared about into a lifestyle,” Roberts recalled. The vessel is just the latest expression of those passions.

On the bike, he considered himself a nomad taking a new home day to day, yet connected to others by computer.

“I live in the network. My home is everywhere and no place,” Roberts said in the gray concrete campus office where he sometimes sleeps under his desk on a futon when he works late into the night. He is not paid by the university but earns his living by writing a newsletter, giving talks and providing some computer consultation.

The last version of the bike, which is parked in his UCSD lab, includes a keyboard fit into the handlebars, which are positioned on either side of the low-slung seat. A computer screen is poised before the driver’s position, and a tiny version attached to his helmet.

A radio receiving dish allowed him to send information to a satellite, where it was reflected back to a dish on Earth and into the Internet. A large solar panel behind the seat provides energy.

Roberts’ trips are a sort of computerized version of a recurring American theme of taking to the road on a journey of self-discovery. John Steinbeck, for one, did it with a dog and chronicled his adventures in Travels with Charlie.

Shortly after he started the last and most elaborate bike trip, though, Roberts realized it was time to leave the highway.

“I did 1,000 miles and I starting thinking about water, and I was having atlas fantasies again,” Roberts said.

Bearded and wearing shorts, a T-shirt and sandals, Roberts seems in his element in the UCSD lab in brisk exchanges with students who manipulate wiring and circuits as they resolve technical issues of building the computers for the new boat.

The boat they are designing will include a main hull where he will sleep and from which he will guide the boat. It has two detachable kayaks that also provide stability. He calls the trimaran Sea Moss Microship, and from it he can write on a computer in the main hull as he stands. He also will have a ham radio.

Another computer operates the boat’s electronic systems, and the entire operation will be waterproof — including the computer keyboard and mouse. Solar panels that rest between the main hull and the kayaks will provide power. He will even have a laptop computer he can take with him when he docks somewhere.

The sailboat can be driven by the wind, and solar energy or Roberts’ own pedaling can power the craft’s propellers.

Roberts likes the stimulation of creating, of new beginnings.

“There’s a lot of energy in the beginnings of things,” Roberts said. “A lot of doing is exploring and learning. The real pleasure is in the learning curve. It’s passion and curiosity.” He is learning Japanese now because he considers it interesting and fun and it represents another means of communicating ideas.

As happened with the bike projects, most of the boat’s computers and other hardware is donating to Roberts in a sort of intellectual barter. For example, the main hull is being designed with volunteer labor from Robb Walker, a partner at Nelson-Marek Yacht Design, the group which designed the Stars & Stripes, Dennis Conner’s boat that won an America’s Cup.

Already dozens of individuals and companies, including many local businesses, have contributed to the enterprise. Walker said they do so in exchange for feedback from Roberts about how the technologies work and ideas for improvements.

All those involved become connected into “a tremendous transfer of creative ideas,” Walker said.

Roberts was drawn to San Diego because he knew people at UCSD and at area technology companies — and he was attracted by the water. He interested the university in a two-year position as a visiting scholar.

UCSD viewed his stay as a way to provide practical training and teamwork for the computer and engineering students, said Clark Guest, an associate professor of electrical and computer engineering who is Roberts’ faculty sponsor.

Once under way, Roberts hopes to involve high school students nationwide by taking water temperatures and sending the information through Internet and on into schools. He said he hopes that project could increase interest in computers and geography.

One big question that remains unanswered is where he will sail.

He has thought about going up the coast, into Canadian waterways, up the East Coast or even through the canals of Europe. He’s not sure, and may not know even after he starts.

He still gets suggestions every few days from friends he’s never met in person but who reach him though his Internet address: [redacted].

He remembers how he was perplexed on the bike trip by fellow bikers who had such a precise schedule that they told him the exact day they would arrive at the Pacific Ocean.

“What if you fall in love, or climb a mountain on the way?” he remembers thinking. “If the meaning of the trip is the end, then everything between is an obstacle.”

Roberts is looking for a travel partner, though. There’s room on the boat for another person, he noted, adding, “I’m looking for a companion to be a nomad with me.”