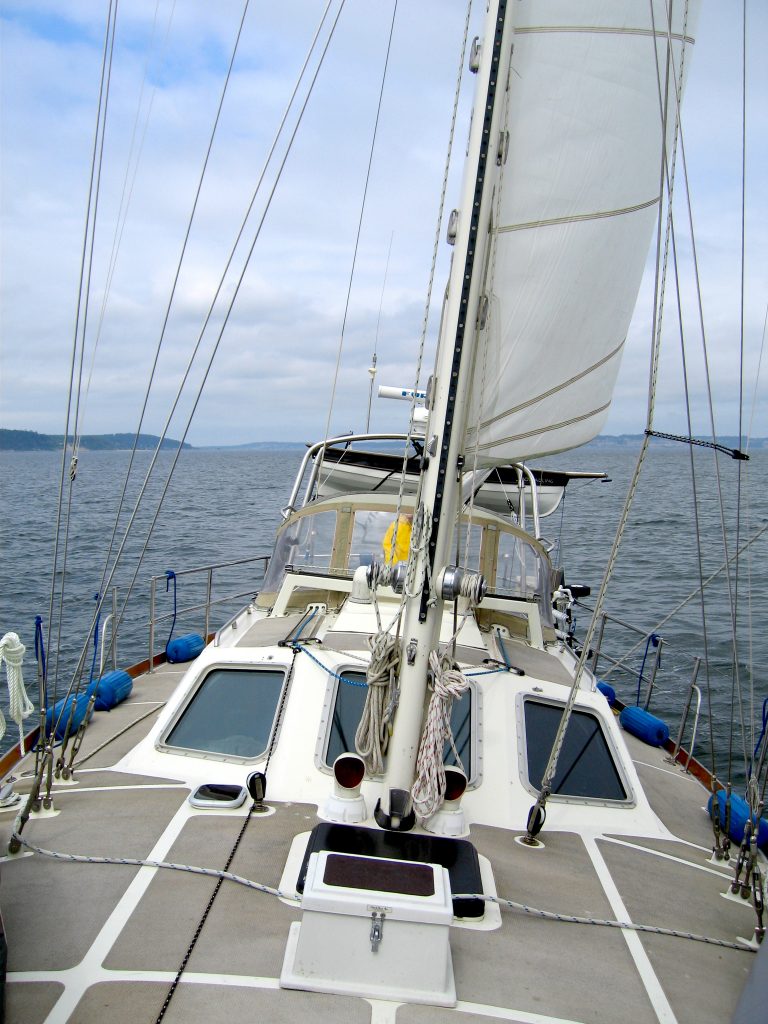 The modular approach to ship system fabrication is starting to manifest itself as little pools of parts in the lab… good thing we resurfaced those crusty old particle-board workbenches a few months ago! The current lab-based projects are:

This makes sense from a development standpoint, given that the boat is an hour and a half away. Weeks slip by as I shuttle back and forth, piddling at measurements and brainstorming, fixing things, and getting immersed in whatever I didn’t go there to work on. Like, how did I end up in this huge water project? Oh yeah, I remember… I opened the space above the starboard fuel tank to install the Wema level sensor, thought I’d check to see if the watermaker would fit there, didn’t like it, considered alternatives, and ended up thinking it would be great on the aft head wall along with a filtration system. So now I’m deep into fittings, rotameters, pressure regulation, TDS monitoring, and a coherent user interface involving over a dozen valves.

And no, I haven’t installed the Wema sensor in the starboard tank yet.

This business of being finite is no less annoying than it was during my more youthful technomadic projects, but of course it is harder now that the toys are growing bigger as the protoplasm grows creakier. I’m not looking forward to some of the projects that are more essential and less alluring… like dangling over the stern with an angle grinder to take dinghy-wounds down to bare metal before infinitely patient rust succeeds to the point where I have to throw another log on to compensate for additional breezes through the cabin.

Much easier to research gadgets online, refine system drawings, and spin ’round in my chair now and then to play the piano for a bit.

Actually, that is not so far out of context as it may seem… there’s real pleasure in this new musical pursuit, now 2 years along. I’ve played flute all my life, but never with any formality (and certainly never with sheet music, except as an abstract graphic crutch for something I could already play by ear… “oh, it goes up here“). I think one of the pleasures in this nascent ivory tickling is the engagement of wetware bits that are not otherwise being used much; it’s a real stretch for these slothful old neurons to get my fingers moving in synch with the chicken-scratchings on the page, but the result is startlingly visceral and I refine it obsessively.

Kind of like sailing. Music is non-intellectual yet immediate, and it wraps around such an elegant conceptual infrastructure that every new discovery is an “aha” moment that reveals the next puzzle in the midst of the rush from clearing up the previous one.

Mathematics is music for the mind. Music is mathematics for the soul.
– Anonymous

Since my “life’s work” seems to be characterized by blending all my passions into some kind of nomadic quest, it is only natural that this is going to have to be shoehorned in. The communications console is the logical place, as it already incorporates both computer-controlled crossbar switching (like my old Auxbar design) and a sexy audio mixer. I don’t really know where the piano will go; I’ll probably end up buying a cheapie and hacking it to fold in half for stowage. That’s very much back-burner at the moment, but inevitable.

The photo below is Grand Central Station from the Microship project, consisting of audio, video, and serial crossbar networks running in networked FORTH 68HC11 boards from New Micros:

I’ve been tempted to re-use this (among other things, it works, which is a huge plus), but in the interest of scalability I’m using USB-controlled latching relay boards for much of the signal routing. They have near-zero insertion loss, and can be controlled by a small always-on micro, with the boundaries separating audio, video, PTT, and even antique RS-232 endlessly flexible (unlike the strict “data types” imposed by the crossbar design above). It’s interesting, though, to see that this problem remains central even 15 years later; part of the whole Shacktopus vision is a unifying layer that erases boundaries between gadgets, and I have yet to find a more effective approach than simply folding everything into a consistent switching matrix with a suitable UI on top.

This brings me back to the console, which has been a sort of mental catch-all zone for yet-to-be installed geekery. Now that I’m laying out panels with actual-size radio templates and the like, I’m finding myself doing a use-case analysis to figure out what is really needed (and where). This is the payoff from the shakedown cruise: such noodlings are no longer abstract.

The fun puzzle is mapping these very overlapping and intertwined conceptual spaces into actual hardware involving scarce console real estate and bundles of cable. Until recently, I have been assuming that the existing “inside helm” would remain more or less inviolate territory, and the “geeky bits” would all be compressed into what was originally the nav station. Devices that bridge these spaces, like the main Mac LCD, would be on a swing-arm mount to allow use wherever I happen to be sitting.

I’ve run this photo before, but it’s worth including here for visual context:

(That image is a year out of date, lacking the wood stove and the new instrument cluster at the helm… but it is the only wide-angle shot of the pilothouse I have. It was taken by the broker, Cindy Mettler, whose job it was to make the boat look spacious for the Yachtworld listing.)

Now that I’ve spent 2.5 months aboard, I have a more practical view of how this needs to work. The comm console (past the galley on the left) should incorporate radios, audio stuff, and tinkering tools; that’s the most open work desk, and is the obvious spot for front-panel-intensive equipment that is not directly involved in boat operations.

The inside helm, at the right surrounding the big chair, actually has a lot of open space. Everything below the DC breaker panel is obsolete and going away, and the upper right quadrant of the helm itself (above the Yanmar diesel control panel that is peeking around the chair) is a Robertson autopilot that has already been replaced. Looks like the perfect spot for a high-brightness LCD owned by a Mac Mini, running MacENC as well as a browser for access to the ship server. The outside helm, where I actually spend most of my time while piloting, will have an appliance chartplotter for maximum turnkey reliability, but the Mac solution is a much more flexible use of console real-estate below.

If I need system goodies anywhere else, then I can use a laptop. There’s a hotspot in the boat anyway, so it doesn’t really matter where I’m sitting.

This approach is very liberating, and is a clean break between ship fundamentals and the overlay of gizmology. It also allows better spillover into underutilized console space above the table to starboard, and cabling over there is much easier (especially where power is involved). This is going to be fun.

One quick bit of news before I wrap this up… I finally broke down and converted a month’s worth of eBayage into auxiliary propulsion for Nomadling (the dinghy), in the form of a Yamaha 2.5 horsepower 4-cycle outboard. I know. It’s hard to be an electric-vehicle purist when I already drive an 18-ton sailboat with two big diesels on board, but I need to reliably make a 10-mile commute each way between lab and moorage to avoid the 54-mile alternative via truck. A quart of gas should do it while being more fun in the process (assuming I’m not trying to haul the table saw), and it’s really a sleek little contraption… but I’ll reserve judgement until I actually try it in open water sometime in the next few days.

The smaller the boat, the bigger the adventure!