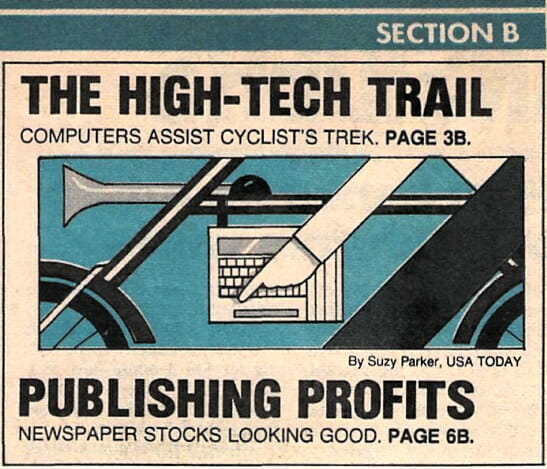 This article by John Hillkirk was hugely pivotal in my early media coverage… and it set the stage for a series that I wrote for USA Today over the next few months. The idea of staying connected with a portable computer while traveling was just starting to filter in to public consciousness, and my quirky take on this was colorful enough that it began to take on a life of its own...

On his 8-foot bike with a notebook computer strapped behind him, Steve Roberts hardly looks the electronic hero he has become.

But this 31-year-old has turned on computer users with a new and daring quest: Riding across the USA to discover how computers are affecting people’s lives.

Since leaving Columbus, Ohio, Sept. 28, Roberts has crisscrossed — usually at 20 mph or less — about 4,400 miles of big cities, small towns and countryside. He’s paying his way by writing two books — one called Computing Across America — and numerous magazine articles about the experience.

Without computers, his journey would have been impossible. Nearly half of the hundreds of people he has met and stayed with learned about his adventure through CompuServe, a national network of more than 100,000 home computer owners. The network costs users $6 or $12.50 an hour, depending on the time of day.

Though many CompuServe members never physically meet, they pass information, gossip and the latest word about Roberts’ travels by hooking their machines to telephone lines.

“Just leave your number,” Paul Edwards, Roberts’ friend and CompuServe user in Sierra Madre, Calif., told USA TODAY. “I’ll have him call you.” A day later, Roberts received the message during a stop in New Orleans and called back.

The computer network, he said, “is the electronic equivalent of a pub. With CompuServe, I have a stable social life even though I’m traveling. I really don’t feel disconnected at all.”

When he wants to check in with his secretary in Columbus, submit a magazine article for publication or find a place to stay, Roberts hooks up his 4-pound, Tandy Model 100 computer to a modem — a device that enables computers to send and receive information over telephone lines.

As soon as he signs on to CompuServe as “Wordy” (his password), Roberts is instantly greeted electronically by friends and well-wishers. “Where are you tonight, Wordy?” “How’s the trip going?” they ask. Others offer meals or lodging for a night.

More than a connection to his electronic friends, computers are his livelihood. Before he left Columbus, Roberts sold his three-bedroom, ranch-style home. After paying his debts, he left the city almost penniless.

“I was a free-lancer, but I realized I was still chained to my desk and my home,” he said. Then, “I realized I could fund the trip with words.”

The vehicle for that trip is his custom-made bike. On the front is an array of solar-energy cells that provides 5 watts of power for his lights, a security system, citizens band radio, yacht horn and computer. For those few times when he can’t find a place to stay, a dome tent is strapped to the back of the bike.

Joked Roberts, “I call it my electronic cottage on wheels.”

So far, he’s discovered interesting problems in the way universities teach computer science. He’s also realized how computers are starting to make even the most dreary, traditional jobs more pleasant.

But overall, “Personal computers don’t have much relevance to the average person. A good percentage don’t have any intelligent idea of what they are.” Still, he thinks we’re getting to the point where “Even people who aren’t computer-literate will see their usefulness.”

How far will he travel? “Who knows? Maybe I’ll go two years in a figure 8 pattern around the U.S. But if you plan too much on going somewhere, you lose sight of where you are.”