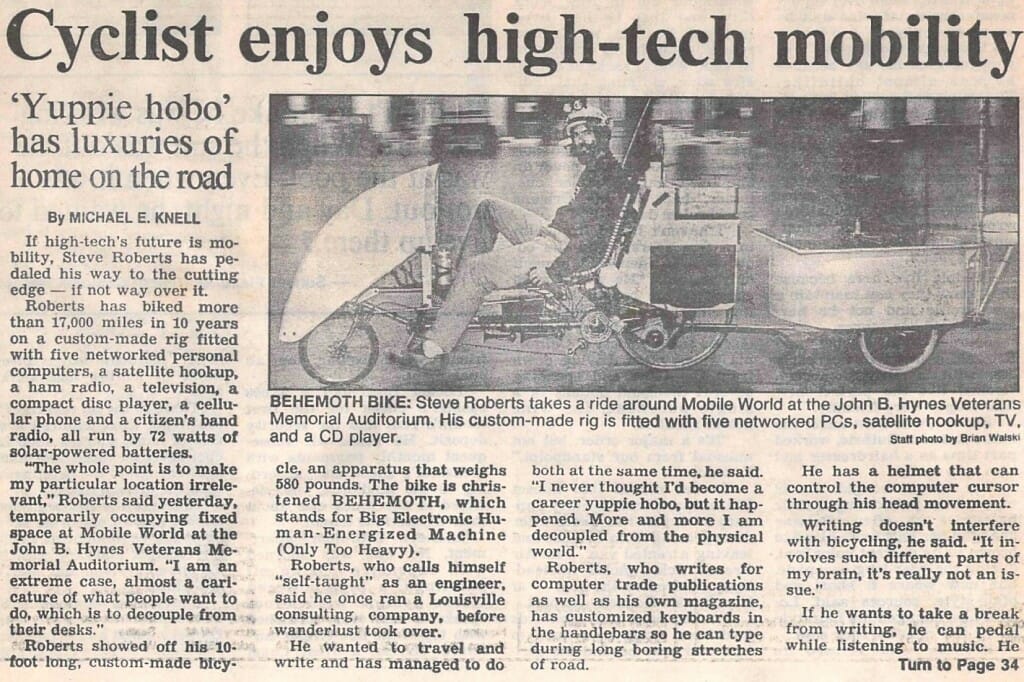 During the extended 1991-93 speaking tour, I trundled into Boston to do the Mobile World Expo… I recall a rush-hour plunge into traffic with my mobile lab in tow, parking challenges in the city, and a few brushes with union trade-show workers who didn’t want me rolling my own exhibit around… but it was otherwise a great show. While there, I had a few visits with local media, including this one…

‘Yuppie hobo’ has luxuries of home on the road

If high-tech’s future is mobility, Steve Roberts has pedaled his way to the cutting edge — if not way over it.

Roberts has biked more than 17,000 miles in 10 years on a custom-made rig fitted with five networked personal computers, a satellite hookup, a ham radio, a television, a compact disc player, a cellular phone and a citizen’s band radio, all run by 72 watts of solar-powered batteries.

“The whole point is to make my particular location irrelevant,” Roberts said yesterday, temporarily occupying fixed space at Mobile World at the John B. Hynes Veterans Memorial Auditorium. “I am an extreme case, almost a caricature of what people want to do, which is to decouple from their desks.”

Roberts showed off his 10-foot-long, custom-made bicycle, an apparatus that weighs 580 pounds. The bike is christened BEHEMOTH, which stands for Big Electronic Human-Energized Machine (Only Too Heavy).

Roberts, who calls himself “self-taught” as an engineer. said he once ran a Louisville consulting company, before wanderlust took over.

He wanted to travel and write and has managed to do both at the same time, he said. “I never thought I’d become a career yuppie hobo, but it happened. More and more I am decoupled from the physical world.”

Roberts, who writes for computer trade publications as well as his own magazine, has customized keyboards in the handlebars so he can type during long boring stretches of road.

He has a helmet that can control the computer cursor through his head movement.

Writing doesn’t interfere with bicycling, he said. “It involves such different parts of my brain, it’s really not an issue.”

If he wants to take a break from writing, he can pedal while listening to music. He can also listen to CB radio, which he called “culturally useless, but occasionally practical”

Roberts is looking for some market-savvy entrepreneur to help turn some of the bike’s devices into products, but admitted that not all his ideas are salable.

“Some stuff here may be cool but it’s not marketable.”

Take the bike’s sophisticated electronic security system. If you tried to take it, it could page Roberts, phone police with an appeal for help or offer a synthesized voice warning, “Do not touch this or you will be vaporized by a laser beam.”