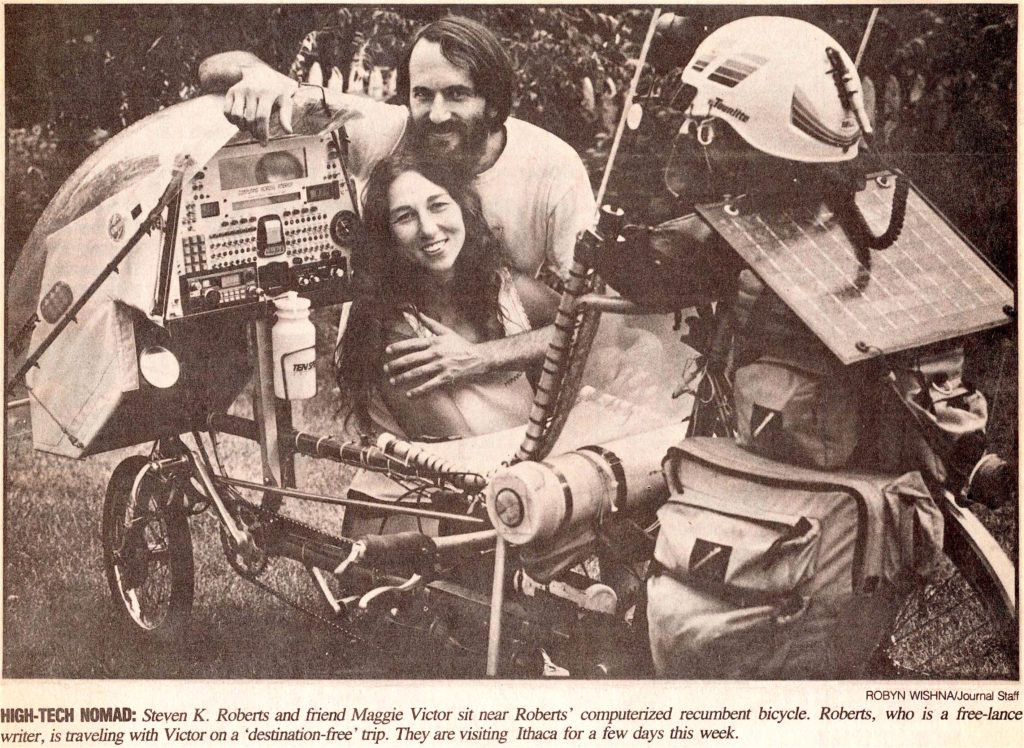 This story by James Ainsworth in the Ithaca Journal was unusual for this epoch of the journey… his fascination with the implications is palpable and he focused on the personal side, in the space of a short article hinting at a sense of cultural transformation. I was delighted to find this in the binders… along with that gorgeous photo of Maggie above. This is a snapshot of a magical time, as we made our way across New York in that summer of 1987. (One of my favorite stories from the road, The Other Woman, was written the next day while visiting a dear friend in Ithaca… this was an epoch of passion and introspection, systems running smoothly, the world changing all around us as we pedaled deeper into dataspace… physically rootless, yet connected ever more strongly to a growing online community.)

A high-tech nomad is wandering through Ithaca.

Steven K. Roberts has been living on a bicycle since 1983, covering more than 13,000 miles of coast-to-coast geography on the North American continent. The 34-year-old has written four books — including a textbook on microcomputer design — and numerous magazine articles.

He is publisher of the Journal of High Treknowledgy, running the operation from five computers, a ham radio, three modems, a shortwave radio and telephone access pack charged by solar panels.

His office is an 8-foot, 225-pound bicycle. The equipment on the recumbent bike includes a tiny TV set, pressurized water supply, packet data communication, digital test equipment and one million bytes of memory and 25 meg disk. He also designed a keyboard with eight keys that serves as a handlebar — allowing him to write and edit while still pedaling.

The low-riding, aerodynamically efficient recumbent allows Roberts to carry 450 pounds of equipment and baggage comfortably — five to seven times more than the average touring cyclist — by using more back and leg power.

Roberts would not say how much all this high-tech mobility cost. He said he embellished a basic recumbent, which one bike shop spokesman estimated could cost $800 to $1,000, with equipment contributed by about 60 companies.

Whether he’s taking in the vista on Colorado’s Continental Divide or the lowlands of Key West, Roberts saves his written and edited material until he is ready to transmit it via telephone wires or satellites to friends or publishers anywhere in the world.

Through the GEnie computer network, the Dialog system of 280 computer data bases, his short-wave and ham radios, and the new packet data satellite communication, this wanderer on wheels plugs into an international decentralized information network that brings a new meaning to the information age’s “global village.”

The archetypal computer whiz kid said he defended himself against aggressive peers by creating an electrically charged, 15,000-volt, double-barrel squirt gun and later escaped an Air Force assignment in Guam by demonstrating a “schizoid personality disorder with passive-aggressive trends.” He never had a penchant for formalized schools.

He dropped out of college after half a year as a freshman engineering student at Rose Polytech in Indiana because he decided it “would do more harm than good.”

“I don’t consider that relevant at all. My education was driven by passion and curiosity much more than the fear of tests,” Roberts said. “The typical problem with engineers is they take their tools so seriously it defines the way they solve problems and the shape of their work.”

Roberts’ textbook, Industrial Design with Microcomputers, which has sections on “Natural Language,” “Art and Engineering,” “Visual Perception” and “Holistic Analysis,” reads more like a Buckminster Fuller treatise than a how-to technical manual.

Is Roberts a harbinger of a new high-tech ontology or a pedaling pedagogue of some sort of meta-industrial lifestyle? Is his mission to critique the ecologically unbalanced, sedentary complacency of 20th century living?

“I’m doing this because it’s an exciting way of life and the bottom line is it’s fun,” Roberts said. “I’m trying to make people feel better about themselves. The world is a better place than the media makes it appear,” he said.

“The typical American way is to work at something you don’t like and live in a place you are neutral about to earn money for a few things you do like. I find that sort of tragic.”

Roberts is not alone in his journey. Maggie Victor, 35, met Roberts in February 1986 and six months later quit her job and sold almost all her material possessions to acquire her own high-tech recumbent. Since their initial excursion from Seattle to San Francisco in August that year, Roberts and Victor have logged about 3,000 miles together.

Victor described their relationship on wheels as a “moving experience.”

“This is definitely the most exciting thing I’ve ever done — this adventure,” Victor said.

Roberts said he will continue his destination-free sojourn until “I burn out or find some place I really want to stay.” While the trek generally is open-ended, they plan to leave Ithaca Saturday and eventually stop in Washington, D.C., for the International Human-Powered Vehicle Conference in late September.