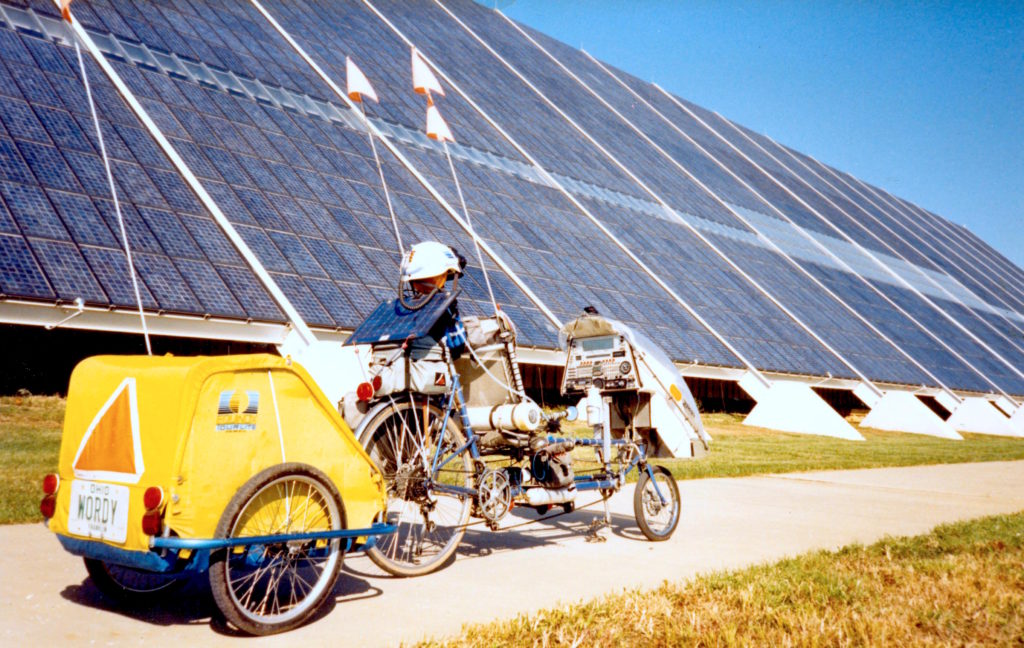 During my bicycling adventures, I often spoke of the essential tools that were integrated into a liberating system… recumbent, laptop, solar panels, network connection, and base office. This lively column had so much reader feedback (bypassing the editor, who had no clue about the galvanizing effect of including my email address) that I began to think of it as a conversation… and their questions drove the choice of topics, leading to this subject far from the usual focus of the magazine. I also wrote a more technical article, including the schematic of this bike’s power system, in 73 Magazine.

I think a lot about liberation these days.

Computer networks and data communications have freed me from the tyranny of “place” and solar power frees me from the utility companies; a constant theme of this column has been “beating the freedom versus security trade off.” Everywhere I go, I hear the wistful rhapsody of those who sense my liberation, and I tell them how I took the chains that once bound me to my desk, installed them on my bike, and now drift slowly around America with whim, weather, and deadlines my only constraints.

There are a few key technological devices that have made all this liberation possible. A bicycle that can painlessly haul 255 pounds. Online networks. Laptop computers. Microfiche. Ham/packet radio. And — running everything but the wheels — a solar power system that has kept me away from AC outlets since I was in the Pacific Northwest.

There’s a lot of free energy in that sun up there, pouring a kilowatt per square meter down onto our heads like an inexhaustible source of venture capital. But we mostly ignore it (perhaps building houses with south-facing windows or solar tub heaters now and then) even though there’s enough free power available to render Iranian oil irrelevant and expose nuclear power as an expensive joke. Someday, as a culture, we might understand that well enough to put the utilities in their place and bring “economy of scale” to the photovoltaic industry.

But it will take a while, if present public awareness of solar power is any indication. My “Winnebiko” is a rolling example of technology’s liberating potential, and one of its most visible features is the pair of bright blue Solarex photovoltaic panels that keep the 30-odd circuit boards chugging away. Yet the questions are appalling: “Does that run the wheels? Burnyourlahts? Is that a solar heater, or some kind of map? How often you have to replace those? How can those run your lights when there’s no sun at night? Are you with NASA?”

This stuff is simple, folks! Solar panels and batteries are appliances, easy to install, and still easier to use. My lightweight, bicycle-borne solar power system has been running five computers, a disk drive, a stereo, ham radio equipment, a security system, extensive lights, and various other accessories for years — all without government research contracts or daily fidling. I stress this point because photovoltaics are now quite mature enough to be removed from their lingering status as high-tech novelties and put to daily use.

Here, in fact, is all that’s going on: there are two robust 12-volt batteries in the bike, (totaling 9 amp-hours; 4 Ni-Cd and 5 lead-acid), each charged by a ten-watt semicrystalline silicon panel at up to 2/3 of an amp in full sun. The various loads, whether headlights or microprocessors, are powered by the batteries via fuses, switches, and in many cases,high-efficiency switching volt age regulators. That’s it.

I’ve added a few extra features to this essential structure, of course, mostly to improve the system’s flexibility and fixability. Since one panel is angled forward on the front of the bike, and the other is on the rear, there is a switch called SOLAR SWAP that reverses their relationship. This is handy if battery A is low and panel B is getting all the sun. Also, there is a switch called BATTERY SWAP that exchanges the batteries relative to the loads — useful when it’s nighttime and the lights have drained one of them. An auxiliary battery charger with an AC line cord is built in so I can recover from long night rides or cloudy days, and a digital display with a thumbwheel switch lets me monitor all system voltages and battery charge currents from the front panel. But the basic structure is just photovoltaic and battery… with a little off-the-shelf controller module thrown in to prevent overcharging in Arizona. (A schematic and more detailed tech info may be found over here.)

The Winnebiko system sports a lot more features than a typical photovoltaic application, largely because it has to be self-maintaining and flexible enough to support a variety of electric environments ranging from delicate CMOS logic to crude flashing taillights. But let’s look at a basic system that can be used by anyone who seeks independence from the power line.

The problem with many PC-look-alike laptop computers: built-in power-hungry disk drives. H-P uses an internal RAMdisk and Traveling Software makes a 2 Mbyte add-on for the Tandy 100/102, but the others all depend on moving parts. You bought a laptop to be free… but now you find yourself carrying chargers, extra battery packs, and maybe even adaptors for overseas power outlets. Long excursions into the wilderness are out of the question, and a significant amount of your attention is on that “% battery” figure.

But slip a lightweight solar panel into your pack or glue it to the outside of your briefcase. My Solarex SX-10 LITE units are about 12 X 17 inches and weigh 1.6 pounds; the company is introducing lighter, smaller 5-watt units this fall. Hook up two wires. If other laptops are like the H-P portable, they will quite happily accept the 12-17 volt charge current and soak free energy from the sun or even a reasonably bright sky (but please do not take my word for this; check with the manufacturer about the battery voltage and charge characteristics before blowing anything up!).

On a somewhat larger scale, you can add your own batteries and build a private electric utility that can also run radio gear and a packet controller — making your briefcase an autonomous free- floating mailbox and information processing system. The point is that effective power options are available, now that the current requirements of computers have been reduced to something on the order of a flashlight. For an appreciation of scale, consider that the Winnebiko’s local network of processors, all geared up for 1200 baud packet datacomm and actively passing messages through distant systems, uses about as much power as a typical Christmas tree bulb or night light — including the average energy required to transmit and receive signals over the 40-mile path to a repeater site!

Maybe some enterprising laptop computer company will build a machine with a photovoltaic case that charges the internal battery when closed and sitting in the sun. In the meantime, contact the companies noted below if you’re interested in taking advantage of this technology and moving one step closer to true mobility.

Cheers from the Finger Lakes…