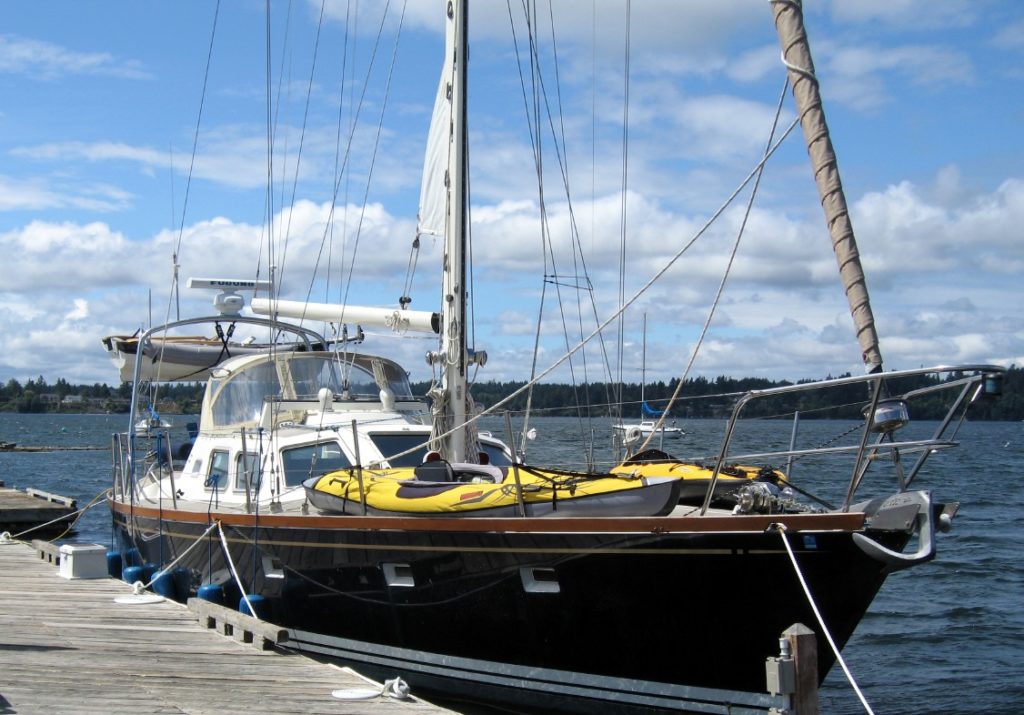 It’s interesting to watch the etymological gestation of a neologism. Twice now, Sky has referred to the folks who mysteriously appear at just the right time to catch lines as dock angels, and thrice I have performed the service for others… feeling a tonnage-proportional measure of the same gratitude I know well from my own uncertain performances. “It’s just docking karma,” I say in humble response to effusive words of thanks; “Scotty caught us the other day when we first arrived here. We love dock angels.” They smile knowingly, and immediately adopt the term.

We haven’t had any more truly horrific docking experiences since Everett… but that’s not enough to induce complacency. A backing test a few days ago indeed revealed highly squirrely behavior, though the Canadian buyer of my Corsair 36 trimaran made the brilliant suggestion that I try to isolate the problem by gunning it in reverse, dropping to neutral, and seeing how she backs inertially with only underbody influences as opposed to the swirl of propwash interacting with the keel.

This is but one of many learning curves that are yet in their early stages. I had a diesel mechanic come by the other day to diagnose low-RPM smoke on the main and a rapidly dripping raw-water pump on the genset; I’m taking her in next week for injector pattern-testing and a pump rebuild. The day after his visit, the Yanmar wouldn’t start… and following the advice of Calder I avoided pointless cranking and thought it through with the aid of friends, books, and forums. It turned out that the stop solenoid, which shuts off fuel at the injector pump, was sticking in the closed position. A fingertip released it and she fired right up.

A few dozen more events like this and maybe I’ll know enough about diesels to at least nod knowingly when someone describes a symptom.

Weirdly, most of my problems these days have to do with fluids. Diesel fuel measurement, leaking hydraulics in the pedestal steering pump, the yet-incomplete plumbing system, even a leak in the shower cabinet that alarmed me with water in the bilge… seems that I’m always trying to contain, exclude, consume, or eliminate liquids. Maybe that’s normal on a boat.

In the domain of electrons, which should be my forté, there are also a few puzzles… mostly related to Xantrex products. Even the little Link meter, a passive device that acts as a sort of fuel gauge for the batteries, continually forgets the capacity of the bank and displays misleading info. The built-in Prosine 2.0 inverter spews RFI and strangely cycles connected laptop chargers. And the little toy 400-watt inverter gives up at a quarter its rated power output and starts mewling pathetically. I’m about to pull it all out and replace it with Outback gear (including the MX60 for solar charge control, with recycled Microship panels hanging off the radar arch).

This shakedown (now 118.5 miles along) is proving to be highly worthwhile… mostly in the sense of helping separate the important projects from the fanciful ones. It’s even saving dollars (whatever those are these days); I’ve streamlined the nav system and eliminated a lot of redundancy in the original specification. We’re still not sure how all this will shake out logistically, but the next phase of ship projects will be very tightly focused compared to the vague activities of last winter that accomplished too little.

I am slowly getting to know the new gizmology, and although the Maretron tank-level adapter is still not making much sense, I did manage to get their sexy rate gyro compass calibrated in the very sloppy magnetic environment of my steel boat. This was accomplished by firing up the network display and following instructions, which basically had me execute a series of steady circles in calm water at a couple degrees per second. Since there was a little current running in Drayton Passage, it made for an entertaining track:

(I was actually a little concerned that residents of shoreside houses might find the behavior aberrant enough to justify calling the authorities, but fortunately we went unnoticed and didn’t have to explain our ferrous wheels.)

Zooming way out, here’s the big picture of our last two on-water days, before falling into the vortex of Boston Harbor and the social swirl of Sky’s ex-life…

The social part is at least half the fun of this, you know. There is a tangible sense of community among sailors, for just being on a boat implies passage through a series of filters including the irrational desire to be out there fixing fluid leaks in exotic places while battling gales and currents. We dined with a delightful couple who covered 25,000 miles around the world on a 50-foot ketch named Skybird and wrote a book about it… I helped them set up a blog.

Duly inspired, Sky started a blog of her own, and I think it will be fun to watch. She has a lot to say, I tellya what.

But you know, aside from all the complexity, bulging design notebooks, ridiculous expenses in a flailing economy, occasional junk hardware, surprise leaks, and the white-knuckled terror of drifting sideways between rows of expensive boats without being able to bring the bow around… there is still magic afoot. It is all too easy to cling to a vision of something you want to do someday, yet watch life pass as dreams are slowly replaced by acceptance.

There is no better time than now.