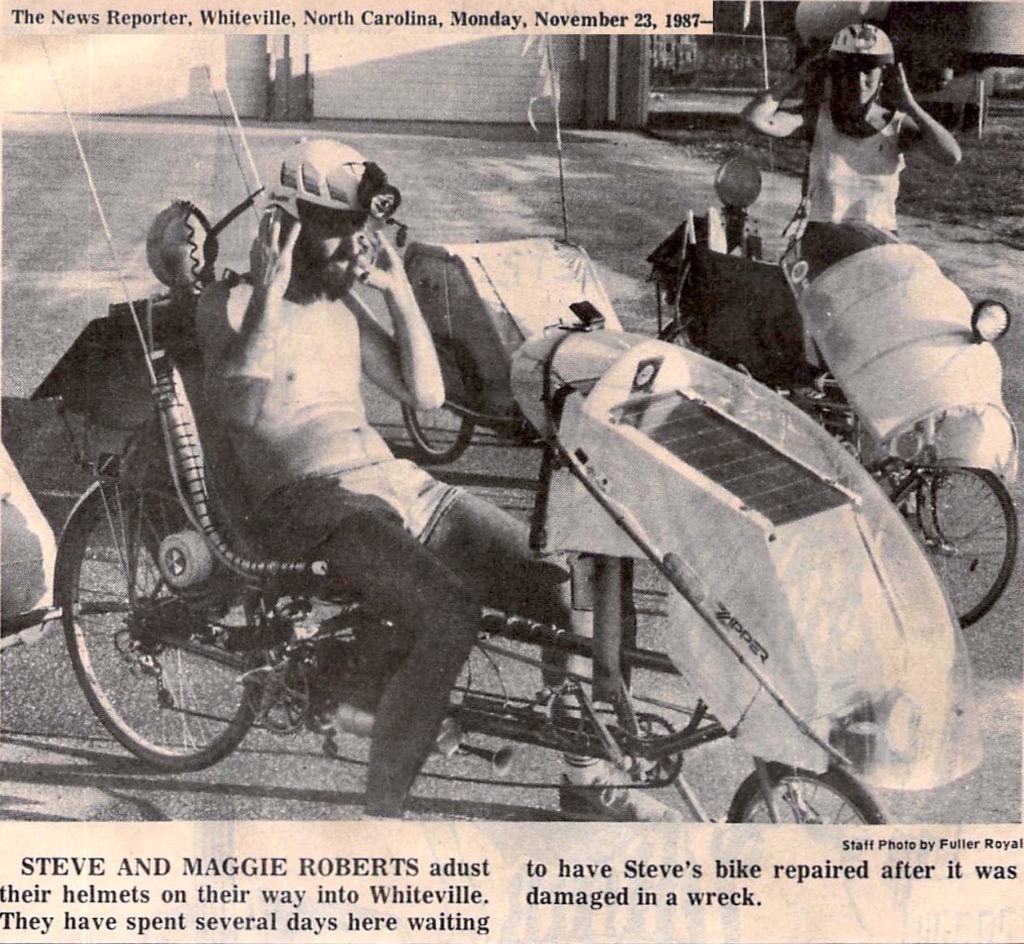 This was an intense moment… only 7/100 of a mile after leaving the home of our delightful hostess in Whiteville, North Carolina, an old man opened his pickup door in front of me. The resulting injury had lifelong implications, although I didn’t realize it at the time… now, over 30 years later, I am dealing with chronic pain from the compression fractures that damaged a couple of lumbar vertebra that morning. It also yielded a lively story for my readers, entitled “Blood in the Spokes.”

Naturally, an accident involving a high-tech computerized bicycle and a bearded guy from the north is big news in small-town America, and this was the local news story.

Two long-distance bikers who spent two pleasant days in Whiteville last week had a streak of bad luck as they were leaving town Friday.

Steve and Maggie Roberts were less than half a block from Clarabel Thomas’ home when a motorist opened a pickup truck door into the path of Steve’s bike. The end result was a trip to the hospital for Steve, and a delay of several days to have his bike repaired.

The Ohio couple, who now list a Cary address because they have an office there, called Mrs. Thomas last week after they saw her name in a national biking publication. She invited them to spend the night, or as long as they wished, before traveling south.

The couple attracted a lot of attention as they pedaled in on their recumbent bicycles. They’re much longer than ordinary bikes, steering is done from grips below the seats, and the front wheel is smaller than the rear wheel. And they were pulling small trailers behind their long bikes.

Each bike is equipped with a ham radio which they use to communicate with each other and to other ham operators. Steve’s bike weighs 275 pounds; it is an electronic cottage on wheels, the only one of its kind in the world.

Whew! We’re talking about Steve Roberts, a high-tech nomad, and his Winnebiko II! And he’s computing across America!

This amazing machine has been Steve’s home and office since 1983, he said. Using the on-board word processing system and handlebar keyboard to write while he rides, he explores American culture, returning nightly to the satellite-based global information networks that have become his electronic home.

A freelance writer and consultant, Roberts said he had a house, car and lawnmower which he trashed in order to “hit the road.”

“I was spending everything on a lifestyle I didn’t like,” he said. “I was stuck in Columbus, Ohio in a house I didn’t like.” His new lifestyle allows him adventure and he pays for it by writing as he goes. He can write as he travels because his computer is hooked to the handlebars of his bike.

He and Maggie are able to communicate by using the ham radio with speakers in their helmets. The radio also puts them in touch with others who often issue invitations for overnight visits.

Maggie joined Steve on the road two years ago. They met in a small jazz club in Columbus.

“Well, sell your car, quit your job, trash your lifestyle and get your ham radio license,” Steve told her.

Long distance biking affords them adventure, but there are also unpleasant experiences. One is rain.

Steve said he doesn’t like to dwell on the unpleasant moments, because he doesn’t want people to single out those over the pleasantries.

Steve’s fourth book, Computing Across America: The Bicycle Odyssey of a High-tech Nomad, is a wild celebration of adventure covering his first 10,000 miles. It tells about his encounter with convicts in the Maryland woods, the ice cave in Colorado, the ultimate blind date in Key West, dehydration in Utah, and life in Dataspace.

He also publishes a bi-monthly, The Journal of High Treknowledgy.

After Steve’s bike is repaired, he and Maggie will travel south to find warm weather as he continues to write. And he’ll continue to travel under his personal philosophy that, if you think too much about where you’re going, you lose respect for where you are.