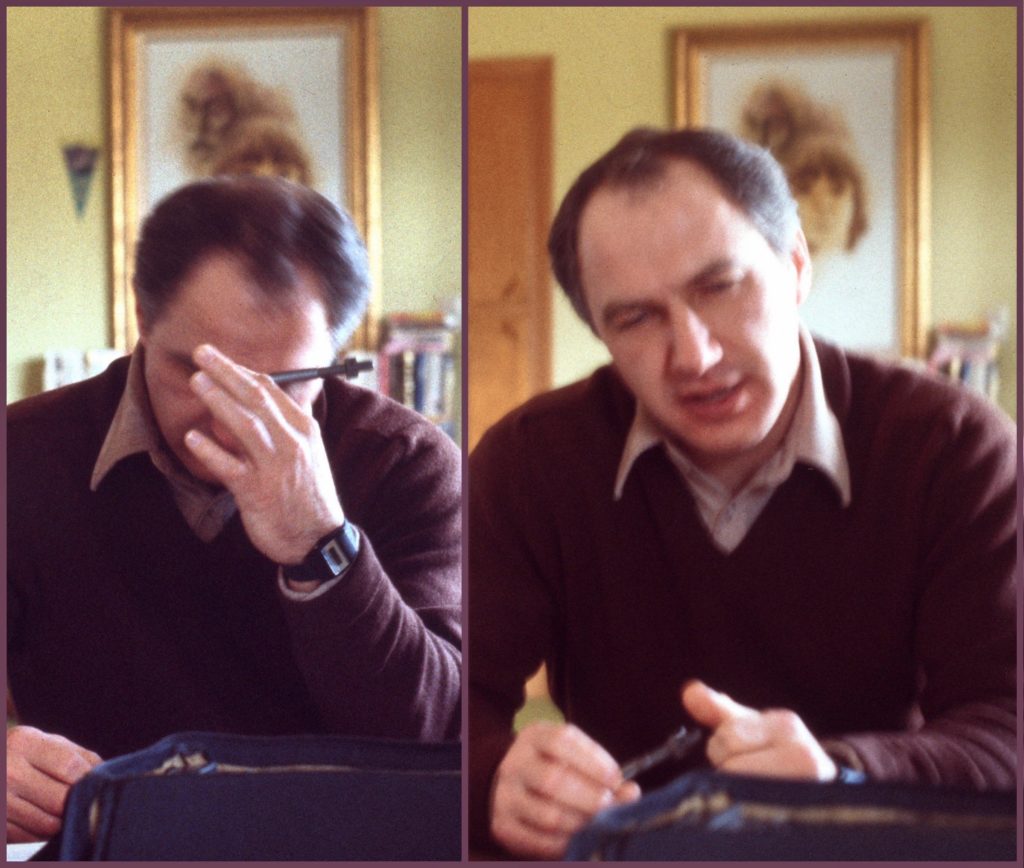 Back in Ohio, in the early eighties, one of my best friends was Frank Feczko, shown in the photos above and whom you can meet in Chapter 2 of Computing Across America. He was involved in lots of my entrepreneurial projects, and I often ended up at their house for dinner… getting well acquainted with his three daughters. The one in the middle, Marla, was about 9 during this time, and many years later Frank sent me this sweet essay she wrote about me for a high-school English class.

Steve Roberts is a man whose individualism is a trait I will never forget. As a friend of my family for almost 10 years, he has showed me that life can be informative and interesting as well as fun. He is a high-tech nomad bicycling across America on a computerized, solar-powered paneled recumbent, a bike that he built himself.

Mr. Roberts is a free-lance writer who got more-or-less sick of suburban life and took to the road to travel around our country visiting all types of people along the way. Sure, he’s been considered weird by some, but once someone realIy knows him, they say that he’s just, “a really neat guy.”

Mr. Roberts has passed on to me little-known knowledge that he has accumulated through his life. He showed me how to make mosquitos explode (by squeezing your arm while the mosquito is sucking blood. Its snout gets stuck in your skin and too much blood enters its body, causing the insect to explode) and how to correctly shoot flies on the wall with a rubber band (and kill them!) . One time he came over with a plastic dry-cleaning laundry bag, bunches of candles, and some string. Mr. Roberts and my dad slaved over this for about an hour, then they took us kids out to the field behind our house. It was a hot air balloon! We lit the bundle of candles and slowly but surely, the homemade hot air balloon rose high into the sky.

Mr. Roberts has touched all the members of my family — each in different but important ways. I think my younger sister (Nicole) and Mr. Roberts got along the best because their brains functioned the same way. They would always be joking around doing something, whether it be wrestling on the ground or playing a challenging game of chess. My mother would love to cook for Mr. Roberts, for even though he made plenty of money, he always spent that money unwisely and never had any food to eat. I can remember quite a few times that Mr. Roberts would come begging for food because he was so hungry (NOTE: or too lazy to cook for myself!). His interest and knowledge in astronomy quickly hooked (Jody) my older sister’s interest, and we spent many cold nights outside on the porch squinting through telescopes to view the universe. Best of friends, my father and Mr. Roberts would always be visiting garage sales, flea markets, bike stores, and anywhere else weird they could think of to go. Mr. Roberts, being so much younger than my dad, brought out a fun and carefree side of my father that I rarely saw. As for myself, I have found Mr. Roberts to be an enlightening source of information and a true confidant.

In 1984, Mr. Roberts set off on a bicycling odyssey that changed his life and his future as a free-lance writer. Until then, he had been a semi-normal suburbanite in Dublin, Ohio, a divorcee with a daughter, Emily, who lived with her mother in Akron (NOTE: Cincinnati). Heading south from Columbus on the start of the trip, Mr. Roberts and his Winnebiko gained much news coverage, appearing not only on local 6 o’clock news programs, but also on P.M. Magazine and the TV show The Amazing World of Guineas Records as ”the highest high-tech bike in the world.” Mr. Roberts and his girlfriend/companion Maggie met many interesting new friends along the way. Computing Across America, the book Mr. Roberts wrote about his journey, was published and sold quite well in bookstores. He also wrote and published bi-monthly accounts of his journey, titled Journal of High Treknowledgy. Here is a sample of his writing: “In mid-July sun my skin had become brown and sweat-glistened — on impulse I made certain of my solitude and then disrobed to creep nude through the wilderness, sneaking up on rabbits, touching cacti in wonder, and pondering the unity of things…”

Without Steve Roberts in my life, I think it would have been significantly more boring. Currently, my family gets postcards from Mr. Roberts and Maggie as they travel around America, but it’s just not the same as when he lived close by. We miss him, and hope that one day he will decide to come back and live here again.