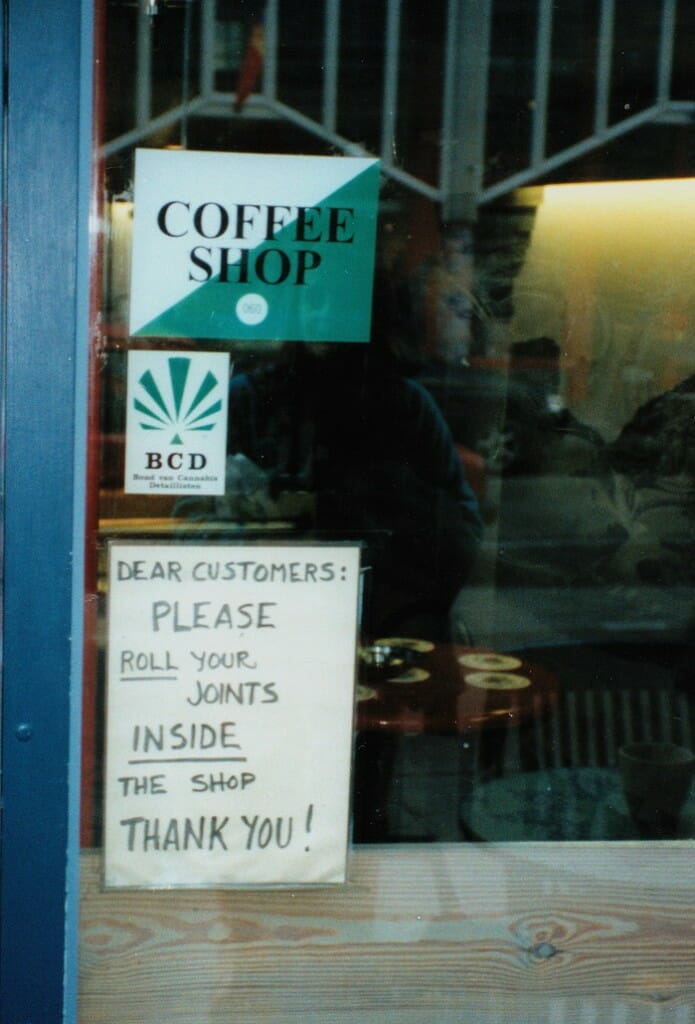 Ah, this one really takes me back to a simpler time. This was a break from the immersive Microship project, which by then was an all-out mad push hampered by unanticipated absurdities (like the landing gear) as well as the ongoing necessary distractions of speaking tours, interviews, and research. My partner of the epoch hailed from London… and she took me for a ramble through her old stompin’ grounds. This piece is my impressionistic take on a 3-week geocultural non-sequitur.

“The key to productivity is to rotate your avoidance techniques.”
— Too Much Coffee Man (Shannon Wheeler)

I recently discovered an interesting phenomenon: turning one’s back on an obsessive full-time activity and going away for awhile can have therapeutic effects. It’s funny… my whole life is oriented toward travel and adventure, yet building the tools to do this in a way that pushes my peculiar geek-expressionist buttons has become so all-consuming that the bottom line (fun) is often forgotten. I had a taste of it last month during the amphibian test sail… a little teaser of good times to come… the first kiss.

But the past three weeks have been a complete non-sequitur. Lisa, a Londoner whom I met 2.5 years ago via the Net, has been craving a chance to revisit her roots… and despite the tyranny of the TO-DO list and a firm launch date, I could hardly stand idly and watch her frolic alone in the pub, club, dub, and grub scenes of Europe.

So we crammed ourselves into the profoundly tiny seats of a British Airways 747 one afternoon. One would think they would offer legroom for tall people in these monstrous conveyances, but alas, not in cattle class… though they do make up for it with unlimited free alcohol. I discovered after patient experiment that the long bones of my upper legs cannot fit in parallel between two reclined seats unless I’m also playing footsie with the person in front of me, a questionable practice that elicits baleful stares over the seat back. We finally staggered off the orthopedic torture chamber after a few hundred hours of jouncing through the sky, wheeled our heavy baggage on a free cart through Heathrow, and staggered onto the Tube… a vast and efficient underground train network we would come to know well over the next few days. And suddenly we were in the thick of it.

My first impressions of London, after a year and a half on quiet Camano Island, were of unrelenting urgency, noise, a melange of languages, city smells, cheap celphones that have changed the culture, and cigarettes everywhere. We go weeks without catching a whiff of tobacco on the West Coast; in London, people who don’t smoke are a bit unusual (though slowly becoming less so as the nonsmoking meme spreads). But the universal odor was somehow less irritating than it would be in the States… all part of the intensity of a grand old city trying to balance general socioeconomic decline with the frenzy of competition and crushing cost of living. Gasoline, for example, averages about 75 pence/liter… or over $4.50/gallon… three times what it is in the States. This might be one of the reasons for the pervasiveness of sleek tiny cars and efficient public transport, although even if gas were cheap, driving in London is hardly for the faint of heart. It’s surprisingly easy to get used to the left side of the road, but the roundabouts and fiendishly narrow roads take a bit longer.

It was all strangely familiar, however — London has provided a lifetime of media images, Monty Python sketches, music, ear-tickling accents, and the Anglophilic underpinnings of American life. Being there was a dose of Anglo without the philia: surrounded matter-of-factly by architecture and place names that have been parroted in American suburbia, there was a poignant sense of decaying grandeur overlaid by hard-edged fast-paced reality. It was like meeting a white-haired woman in turn-of-the century garb… expecting a frail lavender-scented caricature of her era but discovering instead a profane and spunky old dame who muscles through a crowd with no-nonsense grace, skins up a spliff, knocks back a pint, and keeps one eye on the suspicious bloke in the corner. Another stereotype shattered, one of my great pleasures.

But damn, was it exhausting. We escaped almost immediately to Liverpool, joining Lisa’s ex-husband, Alexei, and his partner, Justin, in putting on a laser show at an exhibition by Jamie Reed (album cover artist for Sex Pistols and Afro Celt), hanging out with various interesting characters in the streets and pubs of this beautiful port on the Mersey that was built on the profitable slave trade. Everywhere in England there is a sense of sometimes-painful history and lingering voices of the past — not just in the form of monuments and tourist attractions but simply the relentless presence of Old Stuff… funky and crooked alleys, convoluted musty buildings, old worn stone, and (unlike the States) casual historical comments threaded through everyday conversation. To us, history is still a novelty, hovering somewhere between school subject and Kodak moment. In Europe, history is in your face whether you care about it or not.

Another ongoing side trip was a sort of chautauqua through Lisa’s past: we walked the grounds and wooded hideaways of the boarding school in Stamford where she survived a turbulent and formative youth, stayed in Peterborough with Eva (who took her in after she lost both her parents at 13), quaffed a few pints in the world’s oldest pub in Nottingham, hung with old friends in Leicester, tubed around London to party with pals from Crouch End to Peckham Rye, and wandered randomly in low-level tourist mode including the obligatory Thames cruise. The whole affair added a sort of balance to our odd relationship: Lisa dropped into my life with a rucksack in 1997, and although I’ve certainly heard tales of a supposed past before she materialized from the vapors of the Net, it was all rather like a fictional biography concocted to flesh out the character of a story… vague timelines and sketchy descriptions with a gratuitous anecdote or two thrown in to add color. But now her adorable girlfriends and creative “ex” have become my friends as well, and this miniskirted electronic waif seems somehow more real. I glance over at her now as she lies reading on the couch in the throes of severe jet lag, one hand idly stroking a much-relieved Java (who discovered a few hours ago that we had not, after all, been consumed by predators).

Ahem. Yes, it was a strange trip, this 3-week immersion into other realities. The Paddington rail disaster happened while we were there, shaping the news for weeks as the privatized components of mass transit tossed the blame back and forth with increasing rancor. Connectivity was easy, with cybercafes common and a PC with browser in every home we visited — I set up a travel account at my.yahoo.com and grew addicted to the front page features such as portfolio tracking and customized news, as well as the ability to read mail from POP servers without having to scatter .forwards all over the place. It was all novel on countless levels, though: whizzy cheap GSM phones are common and cheaper than landline, the commercial-free TV is channel-limited and ignored by most of the people we know, showers are almost unheard-of, decent coffee is hard to find, awesome Indian food and stunning kebab are common while Mexican fare is rare, fast electric teapots are in every kitchen, and oh, did I mention the profusion of pubs? <grin> They’re as common as espresso stands in Seattle.

That sense of familiar strangeness was cranked up a notch when we hopped the Eurostar train through the Chunnel (an anticlimactic 20 minutes of darkness), flitted across France at 185 mph, then switched to a local in Brussels for the final 3 hours to Amsterdam. Suddenly we were in a land ruled by bicycles, a civilized substrate under a frenetic veneer of anarchy, held together by a body of laws in which more or less anything goes as long as you don’t hurt anybody and you pay taxes on your sins of choice. Amsterdam is sane, exciting, and creepy all at the same time… the forbidden fruits that land Americans in jail thriving as both social infrastructure and tourist attraction.

It’s not all idyllic, of course; there’s a feeling of entropy about the place that makes it hard to imagine launching complex projects or startups… though everywhere we went people are engaging in the freelance gold rush of the 90’s, web site and graphic design. Technology is overlaid upon Amsterdam like a contrapuntal dance, state-of-the art telecommunications in every pocket while constant bicycle theft has created a ragtag phalanx of rattling junkers, all carrying locks that are in many cases worth more than the bikes that haul them. I saw only one bicycle with a derailleur in the week we were there, even though bikes far outnumber cars, bike lanes line every street, and cyclists automatically have right of way and even go head-to-head with trams. Every light pole and signpost sprouted from a cluster of chained-up fietse. My borrowed bike for the week had a trio of brazed-on spring clamps that held a ridiculously heavy motorcycle cable lock… but what the hell, the system works; everyone knows that if your bike gets pinched, you just buy another one off a junkie for 25 Guilders… cheaper than elbowing through gawking Turks and tourists to sample the openly advertised wares of the Red Light District <shudder>. But anyway, there are no hills, so who needs fancy gears?

All very strange… a multicultural city that’s at once scary and passive, forward-thinking and laid back, choked by a hopeless housing crunch while offering innovative social programs to make sure everyone has a place to live. Locals roll joints on the street and ask cops for a light; coffeeshops present binders with samples of all their combustible wares and menu-like descriptions of each… a marriage between those old High Times centerfolds and the creatively written wine lists of snooty uptown restaurants. Somehow, somewhere, work must get done, for there is a thriving economy in this grand old town threaded through with canals and bridges that scream “photograph me.” If ever there was a caricature of a European tourist destination, Amsterdam is it… and we left with a blend of eagerness to get back to the lab and wistfulness for a mythical carefree sexy existence uncomplicated by PERT charts and stress analysis.

But suddenly, almost as a shock, there are no alien power adapters between the G3 and the wall… Java is purring and darting about… the boat sits on her wheels just where I left her three weeks ago. Bob dropped by to help kit the myriad solar panel parts in preparation for an epic layup this week while he and Mark Coulter assemble the main hull of a BiCanoe, and the TO-DO list that has been pleasantly abstract for three weeks is now very much in my face. All that remains of the trip are the backpacks slowly spilling their contents on the couch, a few new waypoints in the GPS (including Greenwich Observatory and a point 33,500 feet above northern Canada snagged at 545 mph to the visible consternation of cabin crew), a bit of chocolate, latent 35mm images, and a rather delightful melange of memories of sweet friends and amusements. But now… back to the Microship!