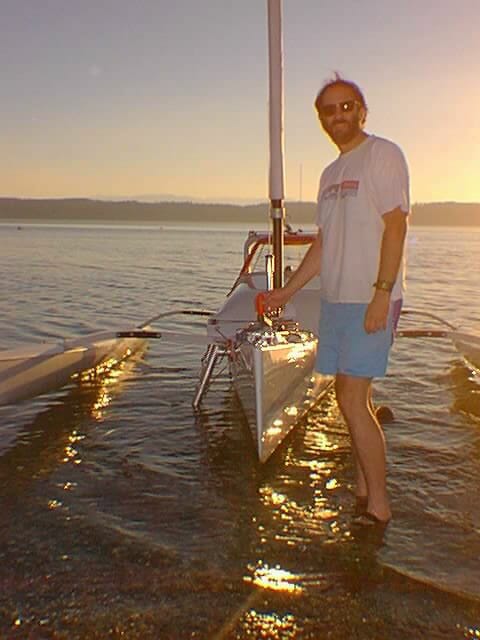 This was my small-town local paper for the 13 years I lived on Camano Island… a time that was actually a decade longer than intended (life has a way of doing that to you, especially when projects become too complex). At the time of this story, we had only been on the island for a little less than 2 years, much of which was taken up with building the 3000 square-foot lab and resuming the high-energy boat work that had begun in Silicon Valley.

The photos (by Natasha Clarke) are from this first test of the landing gear. A much more technically detailed tale is in the Microship Status Report about the event, and a huge piece about the entire 10-year project is here.

“I gotta tellya, it was beautiful,” he wrote in Issue 131 of his on-line newsletter, “The Nomadness Report.“

It’s likely that the report was sent from the on-board computer system as the oversize kayak, with folding solar-panel array, cruised Saratoga Passage.

On Sept. 21, the day before the news hit the Internet, Roberts and friends walked the 20-foot, pedal- and-sail-powered, first-ever Microship down hill to the boat launch at Camano City. There, Roberts wrote, it rolled into the water “with nary a trailer or tow vehicle in sight.” After pulling levers to retract the landing gear wheels and deploy the hydraulic rudder and pedal drive unit, Roberts went “zipping off across calm waters at about four knots.” When a wind came up, he retracted the drive unit and “pulled a couple of lines” to unfurl the sail.

If Roberts, at work on another book, fails to check the Microship’s depth sounder, the latch assembly holding the probes built in to test the conditions of America’s in-land waterways and other down-thrusting attachments will rotate and de-couple from the boat.

The week-long sail through Puget Sound is, Roberts wrote, a “preview of coming attractions” for a two-year tour of America’s inland waterways scheduled to begin next June.

Those interested in environmental impacts will be glad to know that the Microship will not leak gas, oil and other toxins into the nation’s waterways. There is no motor.

Some corporate sponsors may be asking themselves whether this prototype is marketable as the vehicle of choice for a portion of the play-on-the-water set.

Such companies as Reebok may be considering the advertising potential associated with Roberts’ latest, well-publicized adventure.

The Oceanographic Institute is interested in data on river life, depth, temperature, flow and other conditions that will be continuously sampled by Roberts’ mostly home-made, high-tech equipment. Writing as he travels, Roberts plans to compare modern conditions with those noted in the journal written by his grandfather who built a boat and sailed down the Mississippi in 1910.

The parallel journeys could also contribute to the “nature versus nurture” controversy on what makes us the people we are. Roberts was an adopted child who knew nothing about his biological grandfather until he was an adult devoted to travel adventures.

One such adventure, a 10,000-mile exploration of the United States in an invention called the Winnebiko, received international attention.

Created in 1983, the vehicle combined a recumbent bicycle with a five-watt solar panel to power the computer mounted on the handlebars. The computer mouse was wired into Roberts’ helmet and directed through head movements, enabling him to write as he traveled.

Before the journey was over, Roberts had appeared on the Donahue show, CBS Morning News and television features shown in Japan and Australia. Roberts also wrote and published a book on his adventure, Computing Across America.

A later version, Winnebiko II, had 20 watts of solar panels, a two-meter ham radio and 54 speeds. That version covered another 6,000 miles. Next came the Behemoth, with 82 watts of solar panels covering the top of a cart attached to the back, 105 speeds, satellite navigation, a cooling system for the helmet, a six-level security system, computer-generated maps, speech synthesis and navigation and a host of other high-tech innovations.

By the time the self-taught Roberts considered installing some of the same equipment in the Microship, he was offered the use of lab space at the University of California at San Diego in return for teaching classes in electrical engineering. He then accepted an offer from Apple Computers to use one of the company’s buildings in California’s Silicon Valley.

Silicon Valley, however, wasn’t the right atmosphere for Roberts’ creative genius. After touring the coast for the right port, he purchased a home within walking distance of the Camano City boat launch and transferred the project to the adjacent workshop.

On Camano, Roberts had the help of students taking part in his “Geeks Vacation Program.” His wife Lisa, a former London resident he had met through the Internet, helped out with not only the original Microship, but with a companion vessel that will enable her to accompany him on the two-year journey.

It took a year to complete the work of “interfacing of components designed for half-ton shock loads with the delicate skins of a canoe,” Roberts wrote.