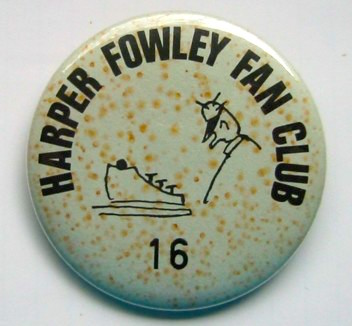 This Feghoot has been languishing in my old paper HUMOR file for decades, copied from a mid-70s issue of The Isolated M, a little ‘zine published for remote Mensa members by the late Harper Fowley of Louisville. (I proudly wore my fan club badge above to the occasional meeting, back when I was a pup.)

I do not know the name of the author… Other than making a few minor refinements, I am only the dutiful scribe, slaving at my keyboard to bring this most awful piece of vintage wordplay into the Internet age:

Three high-school buddies all grew up to be millionaires, but all quite differently. Henry Distay and Seth Worford jointly owned an elite department store. Bill Halstrong became a gangster known for pumping lead into his rivals. He was an awful, sinful man.

One day Bill, wanting a cheap thrill, decided to do some common burgling, and Henry and Seth’s store was the obvious target. Little did Bill know that Seth was head of security.

That night Bill broke stealthily into the store. He thought he was pretty slick, but realized he wasn’t dressed for thieving… so he put on designer jeans and gloves. Then he thought of his four servants who poured his drinks, and stole a beautiful pitcher for each one.

Just then he heard a noise! It was Seth. He ran to the register and took two half dollars and two pieces of folding money. He also grabbed two chocolate-covered cherries… then **CLICK** Seth’s pistol was at his head.

When Henry arrived, he turned to Bill and said, “Did you, Bill, take jeans for your awfully leaded life, two halves and two folds, four pitchers for pourers, two gloves and two cherries, in slickness and in stealth, from Distay-Worford?” Bill: “Seth did his part.”