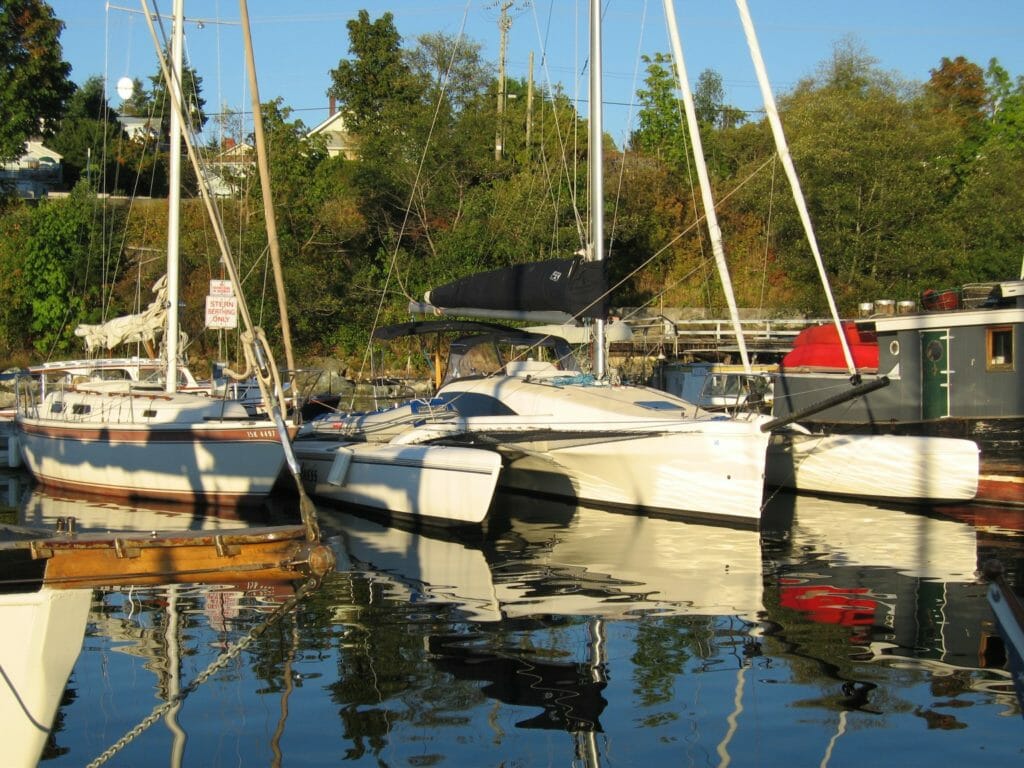 It suddenly struck me in the last day or so that this is what I’ve been missing: a pace of life that is unhurried, driven only by “whim, women, and weather” as I used to quip during my bicycle epoch. Small craft advisory in the Strait? A new friend in the Harbour? A little boat project to do? Then what’s the rush?

A sailor with no schedule always has fair winds.

On the bike, it took a few months to settle into the notion that I was already here, wherever that is, and thus had no need to crank out the miles day after day. The effect was a dramatic re-orientation of priorities, leading to such aphorisms as “if you think too much about where you’re going, you lose respect for where you are.”

Unfortunately, that fundamental truth (which applies just as well to life) can slip away all too easily when one falls back into a cluttered existence characterized by endlessly expanding to-do lists and a relentlessly seductive net connection to keep the back slouched. The time just passes, a sense of urgency always just below the surface, and freedom becomes more and more abstract (to the point, in my case, that browsing my Computing Across America book starts to feel like peeking voyeuristically – and enviously – into someone else’s life).

It must be something akin to musculature, however, because on this little solo adventure aboard Nomadness, now only 9 days along, I have quickly regained the old tone… the almost-forgotten rhythm of the road that spawned a decade of rhapsodic prose. Even the cultural components are eerily parallel: instead of a geeky and bizarre bicycle, I am traveling on a geeky and bizarre boat… and the dockside conversations have much the same character as those in the parking lots of yesteryear. My ship attracts folks who recognize the implications, and almost invariably it turns out they have something interesting to teach me in return for my show-n-tell (which is still pretty brief, as I haven’t yet done anything particularly clever with ‘er).

So, in a twisted way, this feels like coming home. Once a nomad, I guess, always a nomad…

Today’s photo shows me snuggled in ‘twixt two very different vessels: a Cal 31 named Ula single-handed by a lady from Vancouver, and an 1893 wooden tug that still takes on the odd log-hauling and towing job. The tug pumps her bilges every so often… a volume of water showering from the afterdeck that startles me like a city kid’s first visit to a cattle farm. In between the two is my swift little thoroughbred, still pretty much untested but tugging at her stern tie as if rarin’ to go.

The best part of all this? The slope of my learning curve is steep, the asymptote unimaginably distant like a tropical shore lying far beyond the sunset. The journey from here to there is the awakening I’ve been craving for years.