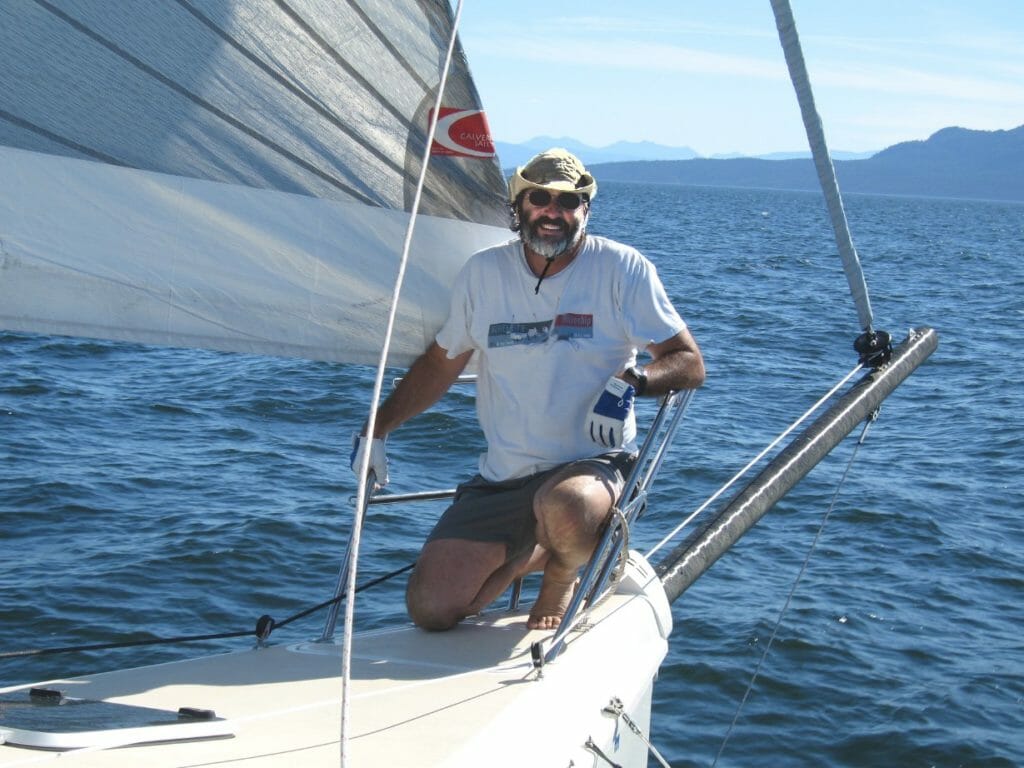 Yarrhhh… I remember this feeling from the bicycling epoch: adventures stack up, accumulating in my brain so fast that they merge into generalities if I don’t hit the PAUSE button and do some writing. “Had an amazing time over the past week” is hardly sufficient commentary when the reality consisted of a close call involving the Coast Guard, intense envelope-pushing localized slope-variations in the learning curve, a boat sinking at the dock during a gale, and a broken tiller… not to mention a scattering of rhapsodic moments and others that can best be interpreted as the slow evolution of tomorrow’s routine.

Yah, what a week. Back at Rancho Mañana, I would have listed a few things on eBay, added to various to-do lists, and then written about both.

My last posting was Monday, when I found myself in the windy and exposed Westview Harbour just south of Powell River. I was rafted to a wicked lee shore in the form of an 1893 tug, and I spent a second night to do a bit of provisioning before heading into the wilderness. Clusters of spiky square nails poked out in the vicinity of the tug’s missing rubrail, so there was some fiddling in the dark with fenders to protect both them and (in the worst case) my leeward hull. I got through the bouncy night of 20-30 knot winds just fine, but in the morning I saw Coast Guard folks working at the other end of the marina… a fishing boat had sunk at the dock overnight and was releasing a nasty diesel slick that quickly reached me downwind.

None of that was really a problem, although it was sobering to chat with a sailor who arrived at dusk and had been told to raft to the doomed vessel. He did so, but after staring at it for a while thought better of the idea and moved elsewhere. It would have been a grim awakening, getting dragged down by a derelict in the middle of the night.

Onward, past the slick-containment booms and back into the Strait. I powered north, winds easing nicely, and monitored the travails of some poor power-boater who called mayday on channel 16 after getting holed by a rock when going below for lunch. Word on the VHF was that the Coasties were assisting and everyone was fortunately safe. I puttered through Thulin Channel, growing conscious of rapidly increasing beauty as I neared Desolation Sound, and early in the afternoon rounded Sarah Point to a stunning view of towering mountains and alluring channels disappearing between wooded islands marked here and there by sheer cliffs. I could see a small cluster of activity in the mouth of Malaspina Inlet: the stricken power boat, the Canadian Coast Guard vessel Cape Caution and (spotted with the aid of my binoculars) a diver down from a commercial towing service. 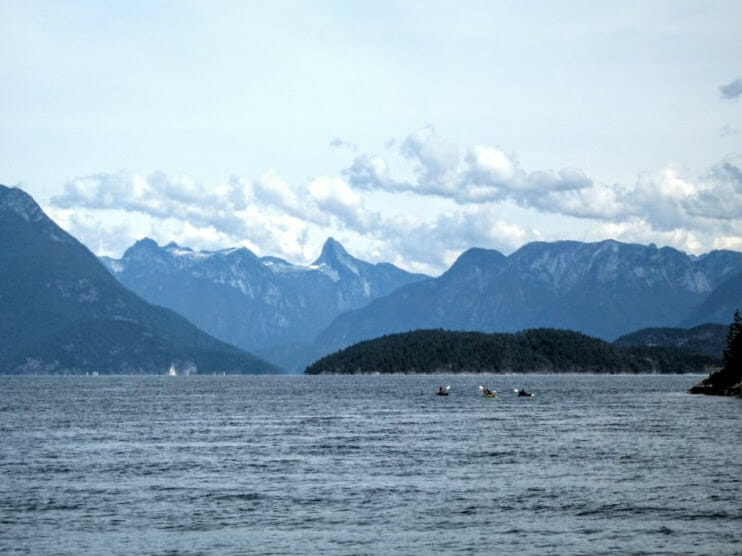 Staying clear of them, I made my way around the north tip of Malaspina Peninsula, intent on finding Grace Harbor and the flotilla of trimarans. Suddenly I noticed all the Coasties on the bridge of their ship looking my way, no doubt admiring the pretty trimaran… but soon they were gesticulating. Before I could even react, they disengaged from the holed boat and powered up, churning whitewater, heading directly toward me… shouting “reverse your boat!” Wowsers, these guys must be serious about random boardings up here… oh crap, I hope my Y-valve is in the right position…

But with the next words, the situation became much more clear: “you’re heading for a reef… reverse your boat!!!” I slammed the throttle back and stopped instantly, then started moving backward… and saw it. I had been so intent on avoiding them and the assumed location of the danger that my attention had strayed from proper navigation. There, no more than 2-3 boat lengths off my bow, was the menacing tan of Stacey Rock, just below the surface… and a glance down at the zoomed-in chartplotter showed my little boat icon kissing the obstruction. “THANK YOU!” I shouted, feeling like an idiot, and quickly found my way into clear water. I called a moment later on their VHF working channel to thank them again, and they were quite gracious (matching my general perception of the organization from various observations during the trip). That was indeed the rock that had damaged the power boat, and the group had been drifting downwind while taking care of emergency repairs… lulling me into a sense that the danger was far away even as I powered directly toward it at 7 knots. In this tracker overlay from Google Earth, the white blob is the hazard: 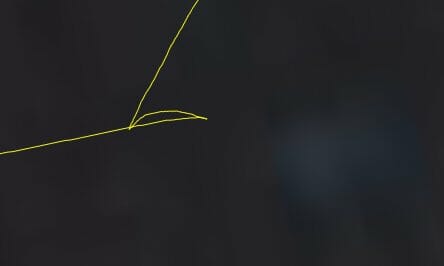 Shakily, I continued, and somewhat anticlimactically tiptoed through random shoals to find my way into Grace Harbour, poke around a bit, then head back north to continue the quest for my friends. I finally spotted one and confirmed that our rendezvous was to be Squirrel Cove on Cortez Island, so ended my 34-mile day by dropping the hook with Fast Company to begin what was to become a raft-up of 7 multihulls… all with bow anchors deployed and a few with stern ties to trees on the steep-to shore. Left to right in the photo, we have Tucanu, Syringa, Fast Company, Nomadness, Dangeroux, Hi 5, & Flying Geese.. 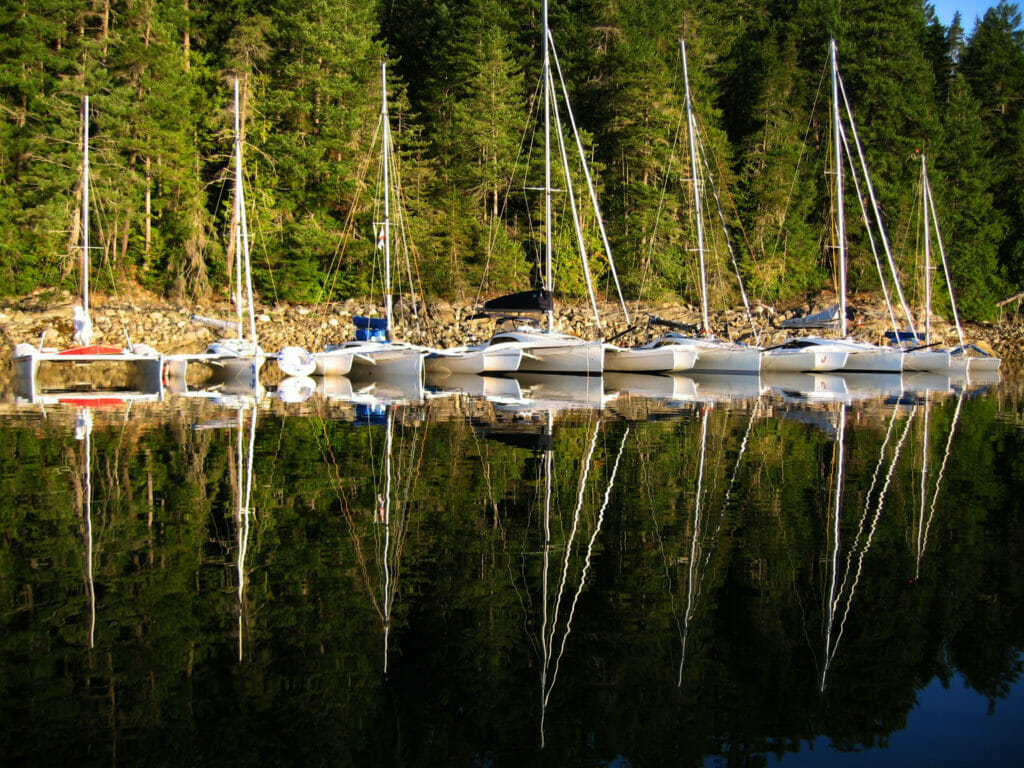 The next day found us meandering off in different directions to reconnect in the evening at the head of a 5-mile-deep cove on the other side of the island… Von Donop Inlet. The place was about as languid and lovely as could be (I think some of the dozen or so boats that were there first were initially concerned about the passel of very strange trimarans rafted into a phalanx… but we were a quiet bunch and soon put their fears to rest).

The days, though each with their own concerns and wonders, merged into sort of a tableau of nautical perfection… the navigation easy (when one pays attention)… the evenings characterized by quiet discoveries and the countless tasks that seem to occupy every on-board moment when not underway. The group was starting to scatter a bit, plans diverging; we had a farewell dinner at Gorge Harbour and then I aimed myself directly down the Strait with the congenial Pender Harbour in my sights.

The weather pattern over the past week or two has been pretty consistent: a high-pressure ridge over the Queen Charlottes, causing northwest winds to come barreling down through the always-feisty Johnstone and the Strait of Georgia… especially in the afternoon and evening. Northbound, this had just meant a lot of motoring, but as I now found myself in open water in lenghthening shadows, I soon had 20 knots on the tail with following seas. I’m still enough of a newbie at single-handing this ship that I was not ready to deal with the main in rising conditions, so I deployed about 65% of the Code Zero asymmetrical headsail (not exactly the optimum choice for a number of reasons) and found myself scooting along at 8-10 knots, running exactly at wave speed, slewing about as the autopilot dealt with the rudder loads but rapidly closing on Cape Cockburn. By the time I puttered into the marina, I had logged a new one-day record of 52 miles: 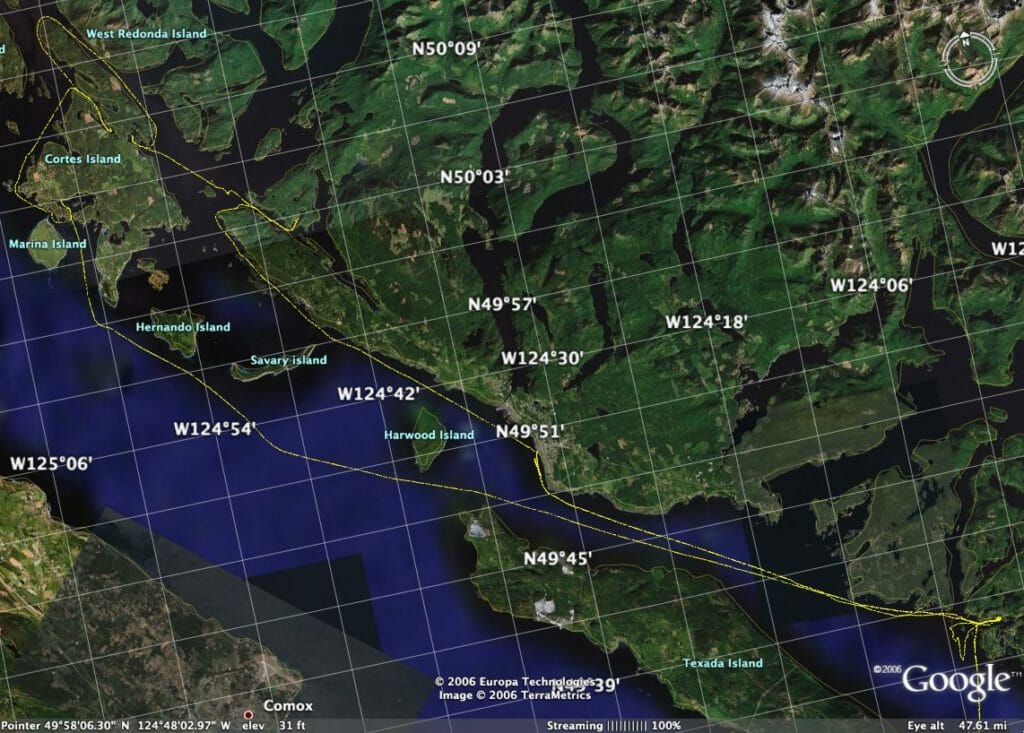 It was time for a sailing lesson. Dave Pritchard, owner of Fisherman’s Resort Marina, races an F-31 tri, and knows these boats well. Nomadness was almost never sailed by her previous owner of 2 years, which is both good and bad news: everything is pretty much new, but nothing has been fine-tuned. This became quite obvious as we experimented with the rig, but with the exception of a few fixable glitches she’s a beauty… easily exceeding motoring speed even in relatively light conditions, flying close-hauled as only a trimaran can. Single-handing will be a bit challenging when the winds get up, but the more data points I collect, the more I’ll refine the rig to be user-friendly. Overall, she’s beautiful and exhilarating.

As we were tacking to head back, Dave stepped into the cockpit well, leaning on the tiller for support. There was a mighty CRACK, and it hung limp, split from the pivot point at the rudderstock forward about 10 inches. We stared at in shock, realizing simultaneously that without it we would be in trouble (given full sail and a freshening breeze); it is fiendishly difficult or even impossible to depower and stow the sails without having rudder control to head up into the wind. Gingerly babying it, we quickly dropped the main and furled the jib, then fired up the outboard (with its vectored thrust, also controlled by the tiller) and limped back to the harbour… holding the stick “just so” to keep the split from become a complete fracture and leaving us with a useless stub with inadequate mechanical advantage for the huge rudder. It’s actually a very dumb design, with a long moment arm concentrating force on a tiny little bit of unsupported laminated wood, and after I get home with Dave’s field-expedient epoxy and thru-bolt repair I’ll do what many other Corsair sailors have done: build a proper socket of stainless or fiberglass that can handle routine operating stresses (we noticed after disassembling it that there were TWO cracks in the laminate, one of which was clearly weathered).

Cruising: the art of fixing your boat in exotic ports.

At this point, I’m down to the last few days of this shakedown adventure, on the cusp of a decision about making a side trip to the famed Princess Louisa Inlet (48 miles up a long channel and through some wicked rapids that have to be traversed at slack)… or continuing south to duck into Vancouver for a quick urban sailing experience before checking into the US at Point Roberts and aiming myself at my new end tie in Blaine Harbor. If all goes as planned, that will be where I will spend a few months tackling the substantial to-do list resulting from all this on-water research.

I’m about to start fleshing out the Nomadness “parent directory” with technical information and other static content. As these projects get underway, they will be documented here to make the process a little easier for others with similar craft (I have found a real shortage of useful information, and there is no documentation available from the factory). The projects cover a wide range… with fixes for shoddy detailing and replacement of cheap fixtures at one end of the spectrum, and hard-core geek expressionism and system integration at the other. I’m very glad I waited to begin all this until I had some time on water!