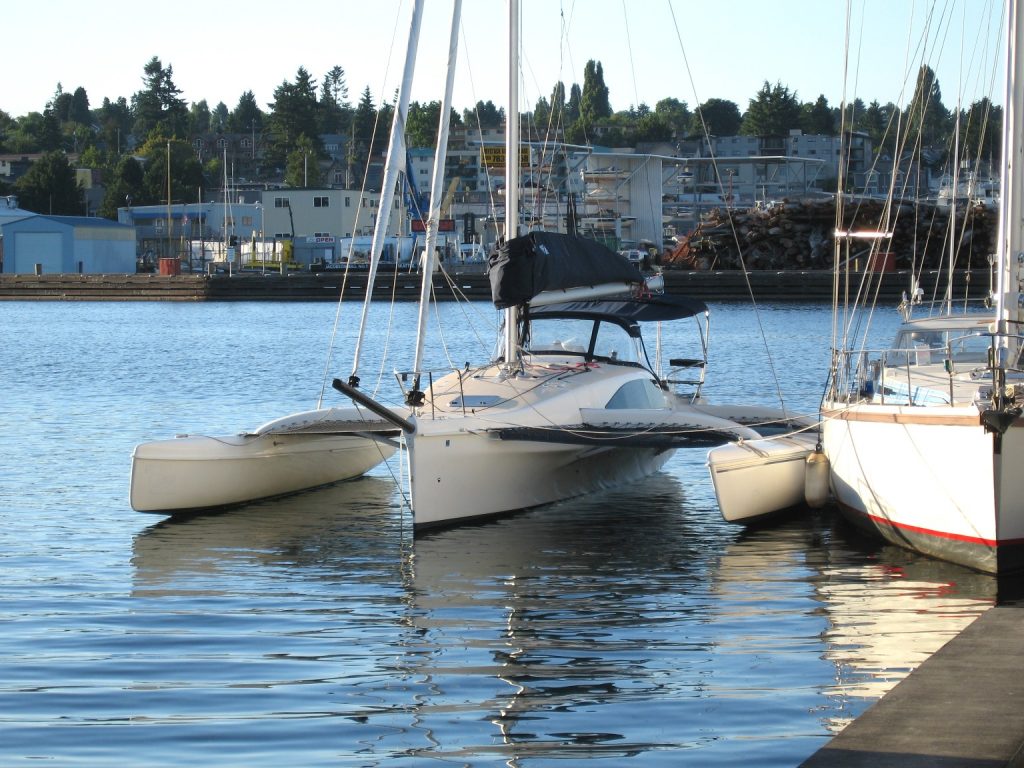 There is a kind of buzzing energy that comes from an abrupt course change… the apparent wind clocks around, the waves lap a whole new song on the hull, and the view off the bow is all different.

That’s more or less what happened on the scale of my life over the past week. It began innocently enough on Monday, when I went to see a couple more boats along the general lines of those I’ve been considering: a grand Rhodes 65 steel ketch (truly a lovely vessel, but with a somewhat scary 32-volt DC system and an implied ongoing TO-DO list that would keep me busy for years), and then the tubby but internally luxurious Mariner 50 motorsailer. And in a way, seeing those confirmed the creeping sensation that all those huge monohulls have been luring me in the wrong direction (especially the ones with high levels of “deferred maintenance”).

Somewhere along the way, whilst contemplating a move to water beyond the gonzo expedition level of the Microships, I started thinking of their exact opposite as being the appropriate scale (even venturing into the territory of vessels large enough to haul a wee geeky boatlet on their stern davits). Coupled with the default “live aboard for two” lifestyle model around which much of the cruising community is formed, this translated into boats that are better described as ships. Certainly the Rhodes 65 falls in that category (and she does it very well, too, with a sort of measured grace befitting her 35 years of cruising the globe).

But the problems with this are many. First there’s the “boat tax” based on length that would nibble away at my resources more or less continually: off-season marina slips, boatyard and haulout fees, and any kind of work that is priced by the foot (ranging from initial survey to bottom painting). Then there’s the sheer bulk… 54,000 pounds is a lot of mass to accelerate and decelerate in a strong breeze, especially if said deceleration is due to impact with a row of moored pleasure craft to leeward. Of course, people deal with this all the time through some combinination of accumulated experience and agile crew (along with a strong bow thruster), but it is still a lot to handle, and insurance companies are rumored to look askance at those upgrading in one hop from homebrew amphibian pedal/solar/sail micro-trimarans to megayachts.

But there’s a more personal component that enters the equation, and this is what particularly struck me: the whole sweep of my life’s work has been intertwined with geeky, high-tech, interesting vehicles: gizmologically intensive escape pods, not floating/rolling retirement homes. I’ve even riffed on this theme a time or two: the “computerized recumbent bicycle” on which I escaped suburban Ohio was, after all, named Winnebiko.

With this in mind, the thought of a big spacious monohull, even a salty and well-designed one, starts to feel like a bit of a letdown… and that’s before I even do the renaming ceremony!

So I went out and bought a Corsair 36 folding trimaran.

This lovely and fast vessel is a very distant and well-refined cousin to the paleo-tri I puttered at re-rigging for a couple of years – Hogfish, which I sold about a decade ago to a couple who renamed her Pelican and promptly sailed off to Mexico. This one has the same well-designed Farrier Folding System that allows the boat to be hauled on a trailer (although with considerably more effort and planning… she’s 9.5 feet wide and has a 300-pound mast), and is the product of many years of refinements by Corsair Marine. Actually, she’s nearly new: built in 2004, bought by a fellow in Seattle, and then almost never sailed. The protective plastic is still on the cushions, the instruments are models still featured at West Marine, and the sails are crisp. And she flies, easily matching wind speed on many points of sail.

Now here’s where the story gets really bizarre… and where my opening metaphor of an abrupt course change (an accidental gybe, even) hits its stride.

It would not be enough to merely acquire a boat and then slowly get to know it, making little crossings of Saratoga Passage to have lunch on Whidbey Island or going out on sunset cruises in our languid waters. Oh no, that would be utterly out of character for Nomadic Research Labs; a sane and careful approach to the learning curve might be appropriate for a big monohull, perhaps, but not with this little rocket ship. So what am I doing instead?

Well, after the survey and closing and the taking of delivery (yikes!), I’ll hang on a mooring for a few days to get everything ready… then go gallivanting off to a party in the San Juan Islands which happens to be enroute to Cowichan Bay in Canada, where a whole passel of multihullers will spend the weekend racing. I’m not a racer, so I’ll plan to arrive around the end of the regatta. The next day, our flotilla will head north, through the Gulf Islands, across the fiesty Strait of Georgia to Pender Harbour, up to the breathtaking Princess Louisa Inlet, back out and north again to Lund and Malaspina, through Desolation Sound (around Cortes and Quadra Islands), into a brief glimpse of civilization at Campbell River, then back to Puget Sound. All this will take about 3 weeks and involve a wide range of conditions, for which I will be mostly single-handing this boat under the watchful (and doubtless bemused) eyes of experienced trimaran pilots. Assuming I don’t do anything too foolish, I should return in late August well-bonded with my new magic carpet, the trimaran named Nomadness.

Aside from the obvious educational opportunity, this is also a deliciously sensible way to approach the integration of Shacktopus and the other geek systems: spend enough time on the boat before hacking to have a good sense of what’s really needed and where not to build structures. And since the boat is trailerable, it can move to a spot snuggled in between my existing lab and the new portable one being built into a 40-foot insulated container (which is big enough to hold Microship Wordplay as well as the essential toolset that will move to Shangri-La when I finally find it).

I’ll save discussion of the system design and other details for later, but suffice it to say that it makes sense and includes all the core Shacktopus systems, loads of solar power, and enough geeky bits to keep me going for a long, long time.

I will attempt to blog from the trip via the new MacBook Pro; there should be a few hotspots along the way. And I’ll finally dust off the obsolete pictures in the parent directory and start adding content specific to this new ship!