This is a fascinating publication, put out by Jeff Blumenfeld for decades now, bringing together expeditions and sponsors. He did a few pieces about the Microship project during its heyday, and is still at it as I post this in 2014… with extensive archives of issue highlights going all the way back to 1995.

My projects have depended heavily on sponsorship, although unlike most expeditions, I always sought product instead of cash (and have written about that choice in my Reaching Escape Velocity book). I am delighted to see that Jeff has a book focusing on the financial approach, and it looks great:  You Want to go Where? How to Get Someone to Pay for the Trip of Your Dreams. I recommend you buy both if you are trying to sort out funding for an adventure… with all the years he has been publishing in this space, he knows the field better than anyone.

Anyway, this piece was published as the Microship project was in full swing… we had our 3,000 square foot lab set up on Camano Island, with very clear plans in mind. Things were moving very well, and he captured the buzz accurately.

by Jeff Blumenfeld
Expedition News – May, 1999 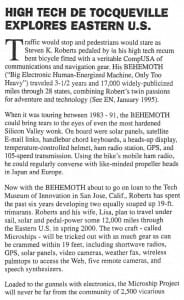 Traffic would stop and pedestrians would stare as Steven K. Roberts pedaled by in his high tech recumbent bicycle fitted with a veritable CompUSA of communications and navigation gear. His BEHEMOTH (“Big Electronic Human-Energized Machine, Only Too Heavy”) traveled 3-1/2 years and 17,000 widely-publicized miles through 28 states, combining Roberts’ twin passions for adventure and technology (See EN, January 1995).

When it was touring between 1983 – 91, the BEHEMOTH could bring tears to the eyes of even the most hardened Silicon Valley wonk. On board were solar panels, satellite E-mail links, handlebar chord keyboards, a heads-up display, temperature-controlled helmet, ham radio station, GPS, and 105-speed transmission. Using the bike’s mobile ham radio, he could regularly converse with like-minded propeller heads in Japan and Europe.

Now with the BEHEMOTH about to go on loan to the Tech Museum of Innovation in San Jose, Calif., Roberts has spent the past six years developing two equally souped up 19-ft. trimarans. Roberts and his wife, Lisa, plan to travel under sail, solar and pedal-power some 12,000 miles through the Eastern U.S. in spring 2000. The two craft – called Microships – will be tricked out with as much gear as can be crammed within 19 feet, including shortwave radios, GPS, solar panels, video cameras, weather fax, wireless palmtops to access the Web, five remote cameras, and speech synthesizers.

Loaded to the gunnels with electronics, the Microship Project will never be far from the community of 2,500 vicarious explorers who follow periodic postings to an e-mail list and the microship.com Web site. 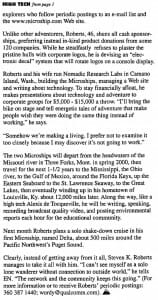 Unlike other adventurers, Roberts, 46, shuns all cash sponsorships, preferring instead in-kind product donations from some 120 companies.  While he steadfastly refuses to plaster the pristine hulls with corporate logos, he is devising an “electronic decal” system that will rotate logos on a console display.

Roberts and his wife run Nomadic Research Labs in Camano Island, Wash., building the Microships, managing a Web site and writing about technology. To stay financially afloat, he makes presentations about technology and adventure to corporate groups for $5,000 – $15,000 a throw. “I’ll bring the bike on stage and tell energetic tales of adventure that make people wish they were doing the same thing instead of working,” he says.

“Somehow we’re making a living. I prefer not to examine it too closely because I may discover it’s not going to work.”

The two Microships will depart from the headwaters of the Missouri river in Three Forks, Mont, in spring 2000, then travel for the next 1-1/2 years to the Mississippi, the Ohio river, to the Gulf of Mexico, around the Florida Keys, up the Eastern Seaboard to the St. Lawrence Seaway, to the Great Lakes, then eventually winding up in his hometown of Louisville, Ky. about 12,000 miles later. Along the way, like a high tech Alexis de Tocqueville, he will be writing, speaking, recording broadcast quality video, and posting environmental reports each hour for the educational community.

Next month Roberts plans a solo shake-down cruise in his first Microship, named Delta, about 500 miles around the Pacific Northwest’s Puget Sound.

Clearly, instead of getting away from it all, Steven K. Roberts manages to take it all with him. “I can’t see myself as a solo lone wanderer without connection to outside world,” he tells EN. “The network and the community keeps this going.” 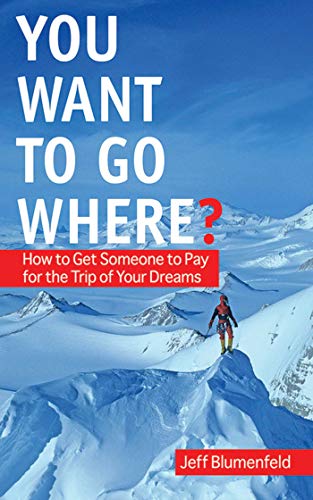