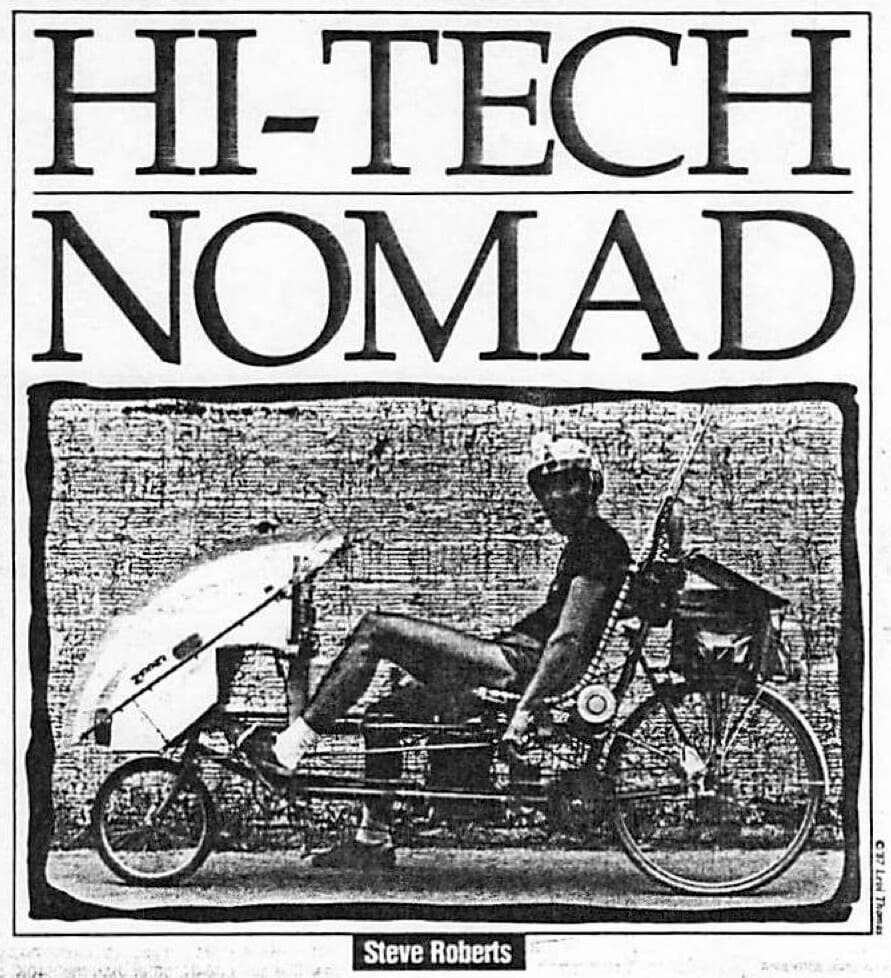 This was the first piece in my Computer Currents column, and I loved it… the readership was at a perfect level for my tales of radical new technomadic tools, and I could write without translating. I invited readers to get in touch directly through a variety of email pipes (see closing paragraph), and hundreds did… some even offering places to stay or technical advice. Direct author contact was a new phenomenon for this magazine, however, which had always solicited reader feedback via letters to the editor, so he thought it was not getting much interest… when in fact I was getting an unprecedented deluge of mail. Ah well. Before it was canceled a few months later, some good pieces captured the tools of the Winnebiko II epoch, and I’m delighted to add the whole series to this archive. This one introduces the radical idea of doing business while traveling on a bicycle…

I see it every day: the longing, the envy, the faraway look.

It’s in the faces of the lunchtime crowd as I roll my 220-pound Grand Touring Machine onto restaurant sidewalks. It’s in the eyes that glance up, startled, as the two megabyte solar-powered contraption flashes in the sun past office windows. It’s everywhere, all over America: in countless on-the-street conversations; in the smiles, the waves, the thumbs-up from passing cars. The look is deeply familiar, for it’s a universal lust — the lust for freedom.

I am a high-tech nomad, a freelance writer and consultant who was chained to a desk — but recoiled violently and found an alternative. “Wait!” I cried back in the Spring of 1983. “My product is words, and words have no mass. Why am I stuck in a stuffy office?”

Six months later I pedaled away from Ohio on a computerized recumbent bicycle. All I owned was either lashed to my bike or connected to it via modem.

Since then, I have pedaled 12,000 miles around the country, refining the system, learning and writing, probing our culture, living an open-ended adventure while continuing to ply my trade through portable computers and information networks. The boundaries between work and play have grown indistinct — as have those between technology and magic. The lifestyle is addictive, an endless celebration of the energy of beginnings.

I’d like to introduce myself here in Computer Currents, for this is the beginning of a new column, a series of articles dedicated to the next step beyond working at home: working anywhere.

There’s considerable allure in that, you know — and not just for extremists like me who have abandoned suburbia to wander the planet on a Loony Excursion Module. Travel opens doors, both personally and professionally. A trade-show jaunt, a tour of distant clients, a speaking gig, an out-of-town consulting job, a week’s escape to the woods — all offer the beleaguered professional a chance to flee the corporate routine for a while, stimulating the senses and broadening the valuable data base of contacts. Besides, it’s fun — something that should be a significant factor in everyone’s “success” formula.

But how often have your thoughts of travel been aborted by “business realities?” Are you nervous about leaving your office in the hands of others? Worried about loss of continuity, missed opportunities, long-distance telephone tag. and coming back to find that the overflowing IN basket has been relabeled IN DEEPER? Are you inhibited by the thought of “road clutter” — of trying to cram an entire desktop into a bulging briefcase of notes, receipts, work in progress, and things to do?

Well, there are solutions to all that, smooth and elegant ones that can become automatic. I’ve been running a company from a bicycle for over three years now, and this biweekly column will be a complete brain-dump of the tricks and techniques that have developed to keep my nomadic business from falling apart.

An Electronic Cottage on Wheels

In principle, this whole affair is straightforward: I travel around, have adventures, meet interesting people, and write stories — either on my H-P Portable PLUS laptop or on the bike’s built-in word processor with binary handlebar keyboard. From any phone, I upload these tales to my office in Chico for laser-printing (or straight to the publisher), then pedal on, secure in the knowledge that somewhere down the road I’ll receive electronic mail advising me of payment and, hopefully, another assignment.

That’s the simplistic overview, but there are all sorts of interesting subtleties. What about hardcopy filing? Maintaining the huge database of contacts? How do I keep up with the telephone wheeling and dealing that goes on in any business, especially a writing business based on one-shot deals? What about cash transfers, insurance, and hard-copy “matter-transfer”? How do I maintain the illusion of stability where bankers and the like are concerned? How do I handle disk backups and file management? Where do I keep manuals and other documentation on the five on board computers (and the megabytes of complex application software)? And how about all those physical problems like power, moisture, shock, and the staggering gross vehicle weight of my overloaded bicycle?

Problems like these have called for some interesting solutions, many of them depending heavily upon new information technologies. The bike has become a rolling high-tech museum, with solar panels, switching power supplies, a hierarchy of microprocessors, nearly two megabytes of CMOS RAM and a 3.5″ disk drive, a local network, AX.25 radio data communications, file management, experimental human interfaces, a motion-sensitive security system, navigation equipment, speech synthesis, digital test equipment, a multimode ham radio station, and a microfiche documentation library… as well as 36 speeds, hydraulic and disc brakes, and the usual complement of camping/touring/cycling gear.

In a non-physical sense, the system is just as elaborate, for my home and office are located in Dataspace. GEnie is my primary communication link, and I maintain accounts on a half-dozen other services as well — including an automatic gateway between the global internet/usenet system and 1200 baud packet datacomm so I can send and receive mail directly from the bike. It’s most entertaining to pedal along a little wine-country road while chatting via satellite with a friend in Maryland, then stop under a tree to munch an apple and transmit electronic mail to another friend in Tyresoe, Sweden.

All this, of course, is intended as a teaser. Behind the bikeload of gizmology are two basic motives: running a business and having fun. For one whose passions involve travel and technology, the latter is a given: the former — making a living — is a bit trickier. It is this that will serve as the focus of this column: the body of techniques that has rendered computers liberating… instead of the opposite.

Along the way I’ll keep you updated on the progress of the journey itself, though the best way to stay current is to sign on to GEnie and read my weekly on-line column (CAA). I also publish a monthly magazine about the adventure called the Journal of High Treknowledgy, and my book about the first 10,000 miles, Computing Across America, is on the verge of being released by Learned Information. For a flyer with information about all this, contact my publications office at <obsolete address redacted>.

Finally, I can be reached on GEnie as wordy, on Internet/UUCP as wordy@cup.portal.com, through the packet radio network directly as KA8OVA@NCIIU-1, or through the experimental Internet/packet gateway as wordy%hobbes@ADS.arpa. I also check into CompuServe every few weeks as 72757,15.

Cheers from the road!